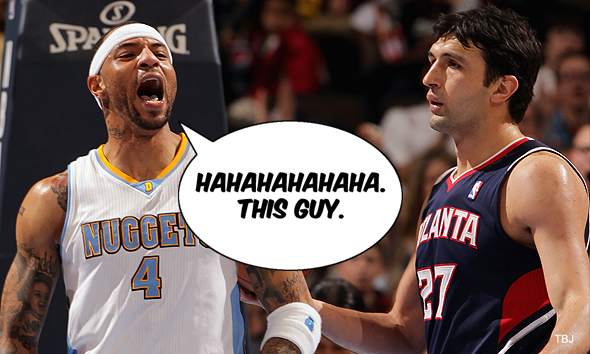 Both in writing and in person, I make a lot of self-deprecating comedy. That's just how I frame my existence. I could give you an example, but I accidentally screwed up my computer by banging my elbow against it. While slipping on a banana peel nearby. This actually just happened. I'm typing on my phone, really slowly. The ambulances will be here shortly. But that's not gonna help anything. Because nothing can help me. Look, I already dropped my phone. Aw, frig. It's broken too. Aaron publish this piece immediat--

Look, I'm just fine. None of the previous paragraph actually happened. Still, while I'm sure someone was disturbed by that last paragraph, I was enjoying it. Because I just never win, and others need to know about it. No matter how close I get, at the moment of truth even my noblest endeavor is stymied. Every time I think of a joke it turns out Rodney Dangerfield beat me to the punch. In 1935. But I can laugh about it. My mom came up to visit and declared my apartment uninhabitable and proceeded to clean for 10 minutes and got it cleaner than it had been since I'd moved in. I was so happy but I couldn't figure out the words to thank her. So I settled for "Happy Mother's Day." [Ed. Note: Now I understand why Dewey tells me "Happy Editor's Day" every time I edit his pieces...]

See, folks, I can laugh about my foibles because I have so many of them. I laugh at my foibles the way others laugh at my hair follicles - because a) there's so many of them, b) they're so unbefitting, and c) I screwed up trying to condition them. Heh. See what I mean? You have to shut me up or I'll go on like that forever. I'm sorry. I'm like one of those old Energizer Bunnies, except I never have any energy and when I'm tired I annoy the crap out of anyone I interact with using my inscrutable stream of consciousness ramblings and an abjectly terrible sense of humor. I'm always tired, so this is my always: this is my basic condition upon the Earth. Started at the bottom now I'm here. Which is not much improved, I'll just say, and the food's just a little better. I write a hundred sprawling essays on every minor indignity that visits me, and I do so with a smile on my face.

Look, I'm not going to argue that the Spurs couldn't win solely because I was rooting for them, in some cosmic comedic sense. Yes, that thought flashed across my mind as the Spurs began their inbound to Kawhi with about a minute left. That would be silly and irresponsible. There's no way I was solely cosmically responsible. Surely something called chance intervened and made futile the Spurs' best efforts, and then, when the tide in the affairs of Spurs had receded, the Heat took advantage of the confusion and fled with their trophy. Surely it wasn't entirely my fault, in a cosmic sense. Surely my reverse-jinxes and postgame comments (meant to be classy, but probably just came off as irritating like everything else I do) were innocuous. Surely I wasn't literally affecting events in Miami with my own magic gift to make everything I touch break down or suck. But to be honest, the only reason I don't think I affected the outcome is that I can barely get my phone to work.

I've said it before: As Micky Arison spoke after Game 7 at the podium, I was regurgitating my dinner and dry heaving through tears. I like to think that this was a reflection upon Arison (whose name is making me wretch from conditioning to type). But it's probably a reflection upon sadness. Sadness for the fallen Spurs. I don't think I've been that sad in a pretty long while, because I'm not that emotional, except when I'm trying desperately to rationalize my most recent mistake. Maybe it was just that the curry I'd made was not very good. But I went to sleep, said probably a hundred times on cyberspace and meatspace how it was "Just how the ball bounces. Congratulations to the Miami Heat." and then I went home and watched "The Tree of Life" and played "Simple Twist of Fate" a hundred times, huddled beside a blanket.

Everything happens to me. Poor me. Well, okay, it's closer to "I happen to everyone I come into contact with. Poor them." The Spurs had a perfect chance to seal the deal and even then I couldn't accept it. Like a neurotic I said outright "This game is far from over" on Twitter when the Heat were down 5. When Ray Allen hit that 3 there was a delay emotionally because I kind of expected something like this to happen, to me, again. I couldn't just be crushed, I had to lose hope right when things were most probable, right before there was any reason to lose hope. I said I was really happy with the quality of play this series, and I meant it. But then, I also hid the part where the Spurs losing the best series I'd ever seen would be totally crushing. Put yourselves in their positions: The Spurs had done everything right up to that point, for a freaking decade. They'd rested their starters, developed their shooters, developed a system on both ends and made the best player in the world seem for about 240 minutes like a relative non-factor on the backs of smart acquisitions and brilliant trades and brilliant coaching. Tim Duncan has deferred and asserted, deferred and asserted, done everything he needs to do, and now they just need to close the last few seconds of, again, a decade of hard work.

And then it doesn't materialize and the Spurs are goats. "And then, Ray Allen. And then, LeBron James." The only way to deal with that is as the punchline to a joke. The Spurs were made to feel they already had the trophy. But 25 seconds took what was in sight, and then another 53 finally brought to logical conclusion an existing fact - the Heat were not better, but they were getting bounces, and suddenly, those bounces were starting to chain together into some sort of unstoppable dribble machine, and LeBron simply took the reins, took care of business, and here we are.

I've never had a lot of self-confidence. Usually, I don't lack for self-confidence, either. I'm basically average. But I'm pretty introspective, probably to a fault. Take it all together, add a sense of humor, and I'm someone that can accurately see the foibles of everyone I interact with, internalize them, and move on with an innocuous laugh. And I can see my own foibles, and I can look more deeply and see my own failures that underlie them. Just to name a couple: chronic underachievement, prodigal talent constantly wasted in a mire of disorganization and flighty attentions. I see my own unstructured life with comedy and look deeper and see a life littered with the memories of pain that make this structure more difficult. I see the people I love returning to me after an adolescence where they had to leave me because I was sort of pushed aside by the world and relationships that have always been bigger than me. I see a decade in which it's been all development and scrutiny for me, and yet, at the end of it all, I feel (probably falsely) that most people like me but no one really understands me. [Ed. Note: Except for me, his Virginia-bound brain double.]

And my favorite team lost after four years and roughly 260 games watched. And it wasn't just the games I watched - I wrote dozens of articles, along the way learning whatever I could about all of the players, the system, the league in which they were positioned, the subtle stories that a simple trip down the SI Vault might miss. The Spurs lost after four years of my intense attention when they had a 1.5% chance to lose. Lost after they had the sea of probability practically parted for them. The Spurs were a historically elite team this postseason, outplayed and outscored the Heat (at one point for 4 out of 6 games (this is supposed to be a great team itself)), and yet, the Heat saw that sliver of uncertainty, slipped in at the single highest-leverage moment, and attacked, and won. Won like I knew they would, even when it was 98.5%. Won because that's what I'm accustomed to. Won because I don't know how I'd be if I ever won at anything. And so I'm in a dark apartment eating Greek yogurt and watching existential films and listening to "Just Like Tom Thumb's Blues" and writing it all down.

And all of this is funny to me, as well it should be. I know it to be the case, because I've never been one for sob stories or wallowing in pain for very long. That's just not my nature. I've got the mindset of a coach, in a lot of ways, and I do remember things for a long time. So I suppose the Duncan bunny will weigh upon me for a long time. But in the end I'm far more neurotic about the immediate past and the immediate future. What everyone else may call the pain of a decade I call a minor setback and frustration. What others call a chip on my shoulder I only call another thing I have to freaking carry. No, whatever pain you want to ascribe to me only weighs upon me in dreams and in bank deposits. And I'm awake right now. So I suppose I'll be alright. I've already written one sprawling essay about this subject, and surely that will be the end of the story for me.

But I sure wish the Spurs had won.