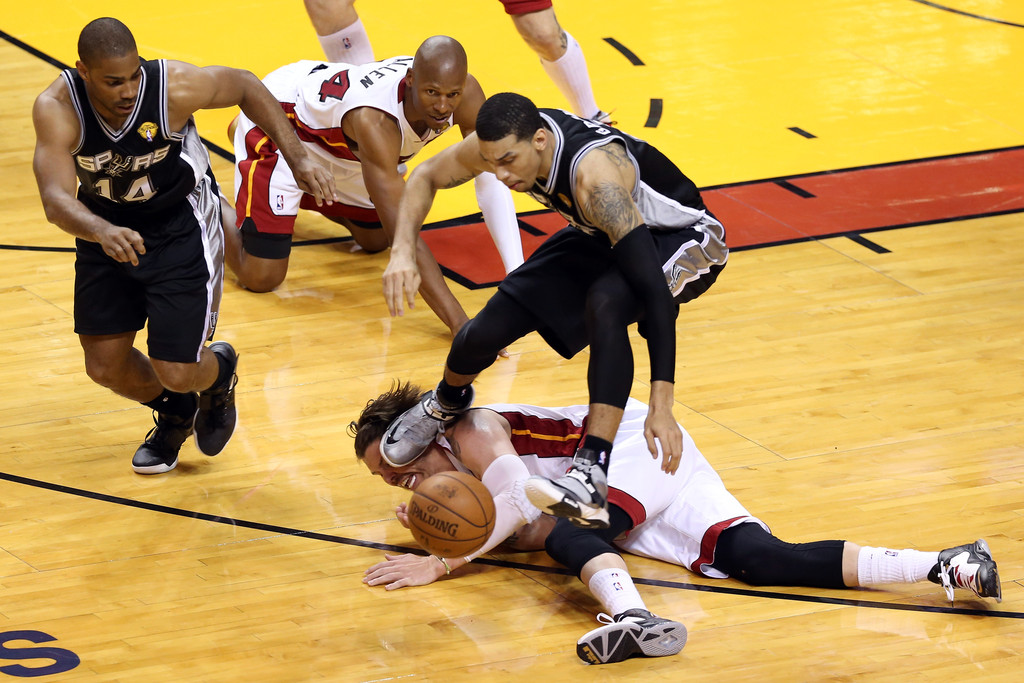 The idea of the elusive role player gets a lot of mileage in NBA circles, no matter where we are in the year. In the playoffs we pontificate about how the Heat benefit from the production of role players like Shane Battier and Mike Miller. When the draft gets into the 20s, we tell ourselves that this is the part of the draft where teams find valuable role players rather than the part where it officially becomes okay to change the channel. Then, in free agency, any time a contender gives the veterans minimum to a guy who can drain a few threes we talk about how that player will help them down the stretch. We imagine him randomly exploding for 25 points in a key playoff game, and throughout the regular season, commentators wax garishly on their rare moments of positive glory. That's the way of the role player, after all. On the surface, this all seems well and good. Who doesn't love role players?

There's just one teensy-tiny problem: no one has the slightest idea what a role player is. For good reason: the definition of "role player" has widened to the point where it means whatever you want it to mean (like "hipster" or "pornography"). These are some of the definitions of a role player that I've heard at various points over the past few years.

At this point, the term is completely relative. Kevin Durant and Kobe Bryant would qualify as role players if you only compared them to LeBron James. So it has to be an elastic term. It means all things to all people. I first noticed this definitional crisis was when I heard multiple people refer to the 2011 Mavericks as "Dirk Nowitzki and a bunch of role players." To anyone who actually watched that team, this is patently false. Tyson Chandler was one of the best centers in the league that season. Shawn Marion, while slightly past his prime, was still a very effective player who contributed on both sides of the ball. And Jason Terry? He was one of the best sixth men in the league. Clearly, the "bunch of role players" schlock was an exaggeration of the highest order.

But where does this idea come from? I refer to #2 on my list: the star player/role player dichotomy. The idea that anyone who isn't an All-Star must be a role player exists because... well, people are lazy! There are plenty of players who don't fit into either category, and no one wants to take the time to describe them with any nuance. Think of a guy like Caron Butler. He's a former All-Star who still makes plays on both sides of the ball. He's still good enough to be a starter in the NBA. He is Butler University's namesake. (OK, he isn't that last one.) All that said, Butler's clearly not what he used to be, and it would be vastly inaccurate to call him a star in any perceptible way. But he's not really a role player either, since he doesn't exist to fill any specific niche. He's the kind of guy you can't really pigeonhole. Of course, this doesn't stop laziness -- we're all tempted to call him a role player anyway.

If we want to talk ourselves into pretending a crummy player is any good, we can tag him with the role player label. Good thing Shelden Williams is out of the league -- we no longer have to pretend he provides any value to an NBA team ever again. His defense may have been not horrible, but he was a terribly clumsy ball-handler, and as his cringeworthy minute-or-so of play in the 2010 NBA finals proved, he's not someone you ever want on the court in crunch time. I really enjoyed how little we saw of Joel Anthony this past season, who carries a lot of the same dead weight. When the Heat replaced him with the Birdman, they became a better team, and a far more watchable one. Nazr Mohammed may or may not be part of this group, depending on how much value you want to assign to his few good games he had against Miami in the playoffs. He had a strong series against the Heat, which caused the Bulls to commit themselves to one more year of his services. Maybe Nazr makes a few key plays in a playoff series, and leads a rejuvenated Rose and company over the Heat, but it's also quite possible that he'll spend the year merely occupying a roster spot, with those few good games against Miami severely inflating his value to the team. Perhaps it's even likely.

Now, let's talk about the one definition of role player that does make a little bit of sense: the guy who only does one or two things right. In my view, this is the definition that actually fits the term; a player who is there to perform a specific task or role. Like a character actor, but for basketball. Usually, these players come in two categories: guys who are only there to shoot threes and guys who are only there to play defense. Sometimes, players can fit into both categories, like Danny Green.

Even though I'm partial to that definition, Green's performance in the Finals added another wrinkle to it: what happens when a role player is consistently the best player on the floor? Is he still a role player if he contributes more than any of your star players over a brilliant five-game stretch? In the first five games of the series, Danny Green dominated. He set a record for the most threes made in the finals, and forced the Heat to watch his every move in the final two games. After Game 5, there was serious talk of him being the Finals MVP. If you look at everyone who's won this honor over the award's duration, it's pretty much always a star player. Nine times out of 10, it's the best player on the team -- the other time, it's the second best!

Of course, Green fell out of the running for the honor when the Heat paid closer attention to him and his hot streak ran out. Had the Spurs won the series, Tim Duncan would have almost certainly been named Finals MVP. But Green's run reminds us that when an alleged role player is at his apex, he can be just as valuable as anyone else on the team. Of course, this didn't just happen in the finals -- Green was one of the better shooting guards in the league this season, shooting .429 from the field while averaging in double figures for the West's best team. Does the fact that his skill set is still essentially "three and D" confine him to a role player's fate, or does the fact that he's so ridiculously good at both put him in a different category? The term is meant to help simplify things, but when it comes right down to it, the term gives us more questions than answers.

If Green is actually a role player, he's obviously one of the best ones in the league. For some of the other guys, their value can be inflated and overstated. In each of the past two seasons, the Miami Heat won the title after a guy who had been struggling hit a ton of threes in the deciding game. Last year, it was Mike Miller. This year, it was Shane Battier. If Battier doesn't drain those six threes in Game 7, there's a fair chance the Spurs are champions right now. So, yes -- Battier and Miller are both "valuable" players to the Heat's team. But I doubt either one is irreplaceable. To be a contender, you need a guy who can come off the bench and hit open threes. That's true. But it doesn't need to be any specific guy. Does anyone really think the Heat would have won fewer games if they replaced Mike Miller with, say, Daequan Cook? And suppose we swapped out Battier with Steve Novak -- does that swing the title in San Antonio's favor? I have my doubts. Sure, Battier's six threes carried Miami over San Antonio, but he's not the only player who could have pulled it off, especially when you consider how dreadful he had been in the playoffs up until that point.

It's not that these players have no value. That's not the moral here. The moral is that real role players -- the one-to-two tool players that really fit the definition -- are fairly interchangeable. You probably do need a few random dudes who can hit threes in order to win a title, but that's what they are: random. The pool of players with limited offensive games who can still hit two out of every five from downtown is wide enough that no one should be hurting in that area. Same goes for big men who just play defense; you can find a big, scary dude who can stand in the other team's way if you try hard enough. (For teams who are interested, I hear Jason Collins is looking for a deal.)

The discussion of role players has gotten completely out of control. We're at the point where we have no clear picture on what a role player is or how much value one actually provides. The role player tag is applied to various players at completely disparate talent levels, making us over-value some and under-value others. Rather than being an efficient way of describing what a non-star player does, the term complicates thing, and makes it all the more difficult to determine a player's true value. I propose one of two solutions. Either we all agree on one definition of a role player: a guy who is only there to shoot threes and/or play defense (and we also agree that Danny Green is by far the best of these players). Or, we agree to eliminate the concept of role players altogether, and do what the folks of Springfield did with Seymour Skinner's previous life as Armin Tamzarian: never speak of it again, under penalty of torture.