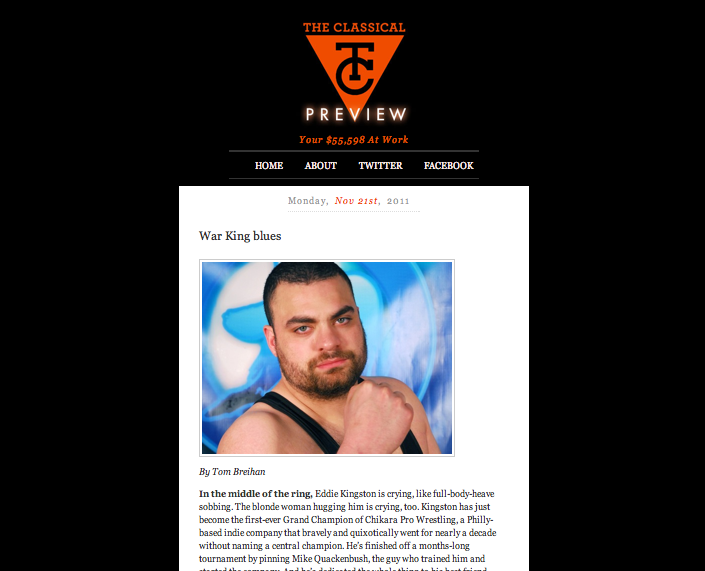 For several years, the recently retired FreeDarko blog took a groundbreaking and individualistic perspective towards the NBA as a whole -- a perspective rooted as much in critical theory as in hip-hop. FreeDarko's main strength was that it collected some of the best minds in basketball out there - both readers and writers - into a single, content-rich site. Its main weakness was that it sometimes felt like the New York Times covering hip-hop: alright, we get it, you think this player is good at basketball and fun to watch...you don't have to abuse the word "profound", if you dig me. But on the whole? The collective added a lot to the community in so many ways, obvious and subtle. The most tangible contributions were the group's two books, the first decent but uneven, the second a classic of sportswriting. On the blog, the underratedly apt commenters and authors frequently expressed (or tried valiantly and interestingly to express) their best interpretations of what was going on in the Association and the new lenses they were bringing to bear on it. In the final tally, FreeDarko brought us some of the great sports conversations of the last decade in basketball, and the collective has a lot of credibility.

Since the blog's retirement, many of FD's authors have stayed in touch and teamed up for spot projects after the main blog started to wane. Their first really substantial project - called The Classical - is the first true sequel, though. The closest analogue (though it pains me to make the comparison) is Grantland - in terms of their longform, firsthand, unorthodox takes on the great stories mainstream and forgotten. The talent pool is quite different and the differences in content will become quite clear a couple of months from now, but for now, the comparison fits. Also, Bill Simmons doesn't write for The Classical, generally a positive thing. I digress. Right now, The Classical is in preview mode. If the content is representative (and it appears to be), then we have fodder for our fourth installment of "Juwan A Blog?". In general, for this feature we'd like to use blogs that are well-established, but the FD group has enough credibility with the community that we're going to allow it. And they even got quite a few new established authors that we can dig into immediately. So, let's.

There are only 23 posts on the site at the moment (and that's including the post explaining that it's a preview). I felt the size itself, along with the generally individualistic author-centric design of the site, led itself well to a simple "let's read their posts and see how they stand" kind of analysis. To that end, I'm going to go through a large proportion of what they've produced so far and offer 8 separate spot reviews of the most recent pieces. But first, a few paragraphs of general impressions:

First, it's worth noting that they went all out with the authors. Just like with Grantland, this is one thing The Classical really did well: They found people who could write, and had interesting particular angles. I don't know if this is just great emergent social networking or great top-down management by FD and their "handlers," but they found their favorite writers and they brought them into the fold. You have to respect that, given the wide range of backgrounds and sources these writers came from.

Second, almost all the pieces were good to great. Besides the unfortunate Tebow piece (you can read my problems with it in 2. below), I enjoyed every single piece that I reviewed. As a writer I don't consider myself to be on their level of excellence, but I'm very well read and I know good work when I see it: this is damn good sportswriting. You've got innovative prose, new forms of presentation, and systemically solid subject matter. All the good things that make sportswriting good. And while I apologize for making this paragraph somewhat fawning, repetitive, and trivial, I can't really help it. I'm always looking for people that can make our corner of reality a little bit bigger and have it blend into the whole of human experience a little more fluidly.

The Classical - at least in its limited preview - has done so. It stands poised to achieve greatness.

Of course - as fans of basketball for more than one year well know - "tremendous upside" is practically a slur against the unpolished and untested. It's very much up in the air if they're going to be able to sustain this level of quality. Grantland looked great in its first incarnation only to gradually peter off to where it is now, with the legitimately interesting and world-intensifying pieces (such as Sebastien Pruiti's great Austin Rivers piece earlier today) slowly being drowned out by the ditherings of Simmons and his least-interesting cronies. I do have fears the Classical could follow that sort of a path as well, though in a different way. How many introductions to rugby culture (6.) are we going to be able to sit through? How many stories like this and great chroniclers will The Classical be able to find? But the seeds are there, the initial results are promising, and I have very high expectations for The Classical. Let's get to examining some of their posts.

Without further ado, let's get into my spot reviews of the last eight posts. We're going to work backwards from the newest post, that way you can read these reviews in the same order you'd (I'd) read them on the site.

Seko lost me at first with that "convenient Christian Michael Irvin" comment, even though I'm not a Christian (or a Cowboys fan). Why? Because the comment was snivelling, out-of-nowhere, unnecessary and dismissive of the actual possibility of a person changing their perspective and atoning for previous mistakes. And as far as substantive evidence for Seko's piece goes, that would back up his thesis and leave me persuaded to a view I'm not all that far from holding? Again, I want to be enlightened, and convincing narratives and stats are what have successfully convinced me of my and my countrymen's prejudices in the past, and of the existence of institutional racism at the core of our society. But Seko basically gives us the single anecdote that Tim Tebow is being treated differently by the media from Michael Vick as the be all and end all of his proof. That doesn't really fly with me. Vick, last time I checked, has a metric ton of confounding variables, like... dog fighting, a vicious sport, no matter your ethnic heritage. Jail time. A more complicated game. And nowhere near the general obsession Tebow has with religion.

That is reason enough for this comparison to be somewhat ridiculous, and - considering it's one of Seko's only substantive claims made to back up the vitriol in the article - reason enough for this piece's central thesis to fail. Tim Tebow and Michael Vick are not just two running quarterbacks of different colored skins. Mystifyingly, even Seko's appropriation of Spike's Magical Negro - which by contrast is a great example of hidden American racial prejudice in the media - is unbelievably off-base and unjustified. But all of that said, despite it being the worst piece I'd read on the site thus far, the piece itself is still quite well written. That is a credit to it despite my disagreement with its methods, reason for being, and general form. As an example of the writing, see the hilarious possibly-intentional irony from the piece: "If the boilerplate about Vick and Newton can at times come queasily close to describing them as exceptionally well-bred beasts..." which does encapsulate racism in sports quite well. I just can't get on board with the whole picture, at least for this article.

And... that's a wrap. Tune in next time, when I'll be offering spot reviews of every single post on this blog, leading to a maddeningly Borgesian Thousand And One Nights scenario. The post will contain a spot review for that post itself, a spot review which will hinge on my handling of that very spot review, which shall pivot to cover the handling of...