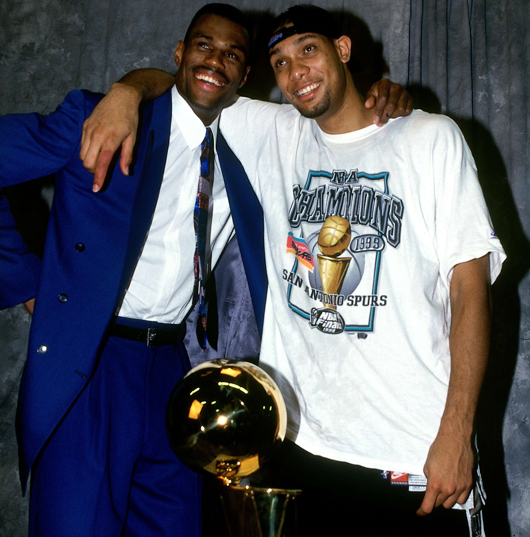 The Two Towers and the Terrible Text

A story told by Tim Duncan (to Richard Jefferson)

Richard Jefferson: Hey, it's Tim Duncan! *Richard walks up behind him* Hey, Timbo Slice, my man!

Richard Jefferson: Uh... what the hell was that, Tim, are you alright?

Tim Duncan: I'm alright, Richard, but I was doing much better before you made me drop my mango lassi.

Richard Jefferson: I'm sorry about that. But why were you so startled you dropped it?

Richard Jefferson: Come on. I'll get you another, and you can tell me. You can talk to me, Tim.

They return to Tim's table, with fresh Lassi. Tim speaks.

Tim Duncan: So, Richard, have you ever known what it's like to be a good buddy?

Tim Duncan: Good. So I don't need to explain the simple intrinsic facts of human contact to you. That's good, this won't be like me talking with you about anything related to the game of basketball. We've got common ground here, as human beings. Have you ever met David Robinson?

Tim Duncan: Good. When he wasn't blocking your shots at the rim to prevent you from ever achieving personal fulfillment, he and I were very good friends. And remain, to this day, good buddies. We try to talk on a bi-monthly basis, though I tend to talk about NBA 2k12 and D&D while he talks of church and charity. We have common ground on both subjects, but both of us tend to focus on different things. Do you have a friend like this, Richard?

Richard Jefferson: Yeah, Luke! Luke Walton. I focus on roller blades, he focuses on aviator glasses. We have... uh, what you said, you know. "Common ground on both subjects." But we've got, like, different stuff in our heads that lead us to emphasize one over the other.

Tim Duncan: It's good to have principles.

Tim Duncan: Good. So, neither me nor David are very big on this "texting" business. Me, I think it's sort of silly. Most of the things conveyed through text messages could more easily be conveyed through a short, 1 or 2 minute phone conversation. Talking with people is refreshing, whereas texts are aggravatingly short and whose meanings can be entirely misconstrued. You probably like texting, as you're from the younger breed, but I simply do not understand it.

Richard Jefferson: Tim, you're like... four years older than me.

Richard Jefferson: ... Nothing with any relevance to this situa --

Tim Duncan: Regardless. David Robinson IS an old man relative to me, so my point is still relevant to me. David Robinson doesn't usually like texting either. He's big on the so-called "chatty cathy" five minute phone call when a text message would've done fine. So, imagine my surprise when I received the following message from David a few nights back between the hours of eight and nine, PM.

Richard Jefferson: Uh... wow, that sounds kind of concerning. Why did he take the time to add a bible verse to the end, Tim?

Tim Duncan: Even though he never texts anyone, David sets a new bible verse as his "text signature" every day. I don't know how someone as tech-mystified as David actually figured out how to do that, but when David wants to do something for Jesus, he... how would you say it...

Tim Duncan: ... yes, Richard, he goes H.A.M. Regardless. I was really, really worried! I called him, I texted him back, I pinged him on IRC... I did everything but call Valerie, given that he had explicitly ordered me not to do that. He'd never given me any directive like that before, so I felt like I had to honor it. My nerves were wracked, and he had clearly turned his phone off upon sending it. I was frantic, to say the least. So, I decided to do something drastic.

Tim Duncan: I decided I would run to his house, but sneak in such that Valerie was not alerted to my presence. It was an operation that was going to take every bit of my wit, guile, and intellect. I told Amy I needed to go out to serve as an emergency Dungeon Master for my friend Charles' weekly D&D game. She was dismissive of my concerns, but gave me the car keys anyway. I hoofed it to the local costume shop, where I bought their largest set of wizard robes, along with an Obama mask. I then went to a local Indian restaurant I very much enjoy and got a mango lassi to go, because I felt such an ambitious plan demanded it. I pulled up to the Robinson household at about ten past ten, and began to put my plan into motion. I put on my disguise, and snuck into a treehouse in his neighbor's yard. I then picked up my phone. It was time to call Dominoes.

Richard Jefferson: Wait, wouldn't ordering a pizza give you away?

Tim Duncan: *sigh* Richard, you have no imagination. I wasn't ordering the pizza for me. I was ordering it it for_ Mrs. Robinson_. Both as a distraction to allow me easy entry into their house, and as a karmic blessing to ensure I wouldn't harm my good standing with the fates too much by perpetrating this heinous, unjustified break-in. Anyway. I waited in the tree-house for a while, stirring when my blackberry told me that pizza artist Geraldo had finished my pizza, and that pizza delivery boy Waldorf was on his way to deliver it. I took out the grappling hook I'd carefully constructed using children's toys and a strong bit of rope, and prepared to rappel my way into the household.

Tim Duncan: Heh, no. Then I would clearly be breaking and entering, Richard, and that's definitely illegal. No, I simply exited the treehouse, hid behind a bush in their back yard, and got out the key to the house David had trusted me with long ago, for use only in emergencies and potlucks. I heard the car stop out front, approached the door, and entered as soon as I heard the tell-tale doorbell. I snuck into the den, where David's schedule-book sat in wait. I opened to today, hoping to find a clue as to where he was. Nothing. The day was blank, with the exception of his customary 8:00 AM attendance to daily services. Cursing my luck, I shuffled the papers on his desk looking for a sign. Then, out of a bundle of unfinished letters to charities, an itinerary dropped. Reading it quickly, I realized my error -- David wasn't in San Antonio at all, he was in Washington D.C.! I took a picture of the hotel's phone number with my blackberry, and after rearranging the desk, I snuck out of the house. I got in my car just as the Dominos deliveryman was leaving. My plan had worked to perfection, but I hadn't actually learned anything, and I felt pretty bad about breaking into David's house.

Richard Jefferson: Wait, were you still dressed as a wizard with an Obama mask?

Tim Duncan: Yes. Anyway. I called the hotel he was staying at, hoping they'd patch me through to his room and I could figure out what the hell was going on here. After the old run-around with the concierge, they finally patched me through to David. The phone rang a few times, before I heard a tired yet familiar voice on the other end.

"Oh! Um, hi, Tim. Why are you calling so late? It's midnight, you're usually asleep right now."

"Different time zones. What's wrong, David? I got your text. Were you... kid-napped?"

"Hah! Oh, Tim. You always were a worrier. That text had nothing to do with a kidnapping! Or... anything even remotely resembling one, honestly. I was just texting you because I was really excited. Valerie was voted all-state Best Potluck Contributor from the local church's potlucks! I nominated her several months ago. She mocked me for it, but clearly it was the right call. The pastor and I know good potluck when we see it! Anyway, I wanted to tell you, because I wanted to make sure you came to the banquet in a few months, because you are a cherished family friend. I also wanted to make sure that even if you heard it through another source, you absolutely don't tell Valerie. It has to be a surprise. Her face when they announce the winner is going to be crucial. Anyway. Uh... sorry for worrying you, you shouldn't read so much into text messages. Also, you sound really hyper. Have you been drinking mango lassi again?"

"I... congratulations to Valerie. Amy and I will definitely be at the banquet. I, uh. Sorry for waking you up, David. I... yes, I have been drinking lassi. I... goodbye."

"Okay, Tim. Have a good evening, and fly with God."

Roughly one minute and forty six seconds of absolute silence.

Richard Jefferson: ... Tim, how did you remember that whole conversation?

Tim Duncan: When David Robinson tells you something, you best not forget it.

Richard Jefferson: So, wait. That was it?

And that was it. 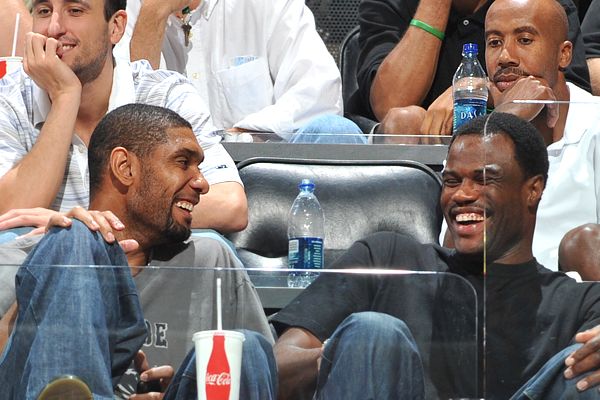