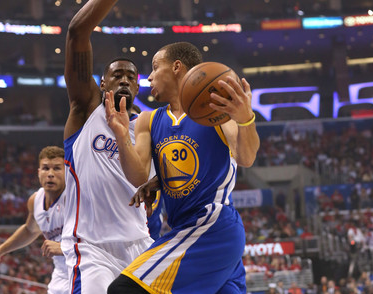 How do you defend a team you know you can't? It's a good question, one that 4 to 5 teams face every night during the NBA's regular season action. Whether it's because of your defensive struggles or the other team's offensive mastery, there's always a set of games on the schedule where a team is faced with opposition they don't have much of a chance to defend. It's always interesting to try and pick out the one or two strategies the defensively challenged team comes up with to try and defend their offensive kryptonite. Sometimes the strategies work, sometimes they don't. Sometimes they're abandoned early in the game, and sometimes they become entirely irrelevant due to a poor shooting night or another random malady. L.A. did not do either of these things, and stuck with a neat little strategy that proved to be the difference in a tight contest between defensively challenged contenders. It involved misdirection, open men, and one of Stephen Curry's few flaws. Let's examine it, through the lens of Curry's eleven (!!!) turnovers.

To wit, a list of those eleven turnovers last night:

Apologies for the lack of video, here -- I honestly don't know how to capture videos for posts like this. And even if I did, I generally prefer writeups, because (as I detailed on Twitter last night) I am a 76 year old. Benjamin Bonner, as my friend John aptly noted. Go figure. But Curry's turnover problems intrigued me. One would be excused if you looked at Chris Paul's impact and assumed he was responsible for 6 or 7 of Curry's "bad pass" turnovers, but that isn't really accurate at all. Paul only directly accounted for three of Curry's giveaways -- that left a full eight turnovers to the rest of the Clippers, which made me wonder if there were some general themes in the takes remaining.

With the first turnover, Curry was shooting a pass that -- out of context -- actually seemed pretty safe. It was a semi-cross court pass to an open man in the corner (in this case, Iguodala) whose defender, Jared Dudley, had appeared to completely leave him. Fun story, though -- while Dudley was a good distance from Iguodala, he kept his body and line of sight oriented in Curry's direction, which made it easy for him to slide over and catch the pass. It was clever and tricky -- from the angle Curry was at, it'd be almost impossible to see that Dudley was both covering one of Curry's inside options and watching him and in exactly the right position to jump a pass to the corner man. But there he was. Turnover #6 was less of an acceptable move from Curry, but the Clippers were being similarly pressuring -- Dudley was right in front of Curry with his hands flailing, which ended up disrupting the pass and causing the steal, but both Chris Paul and Blake Griffin were making a bee-line for the corner man Curry was intending to pass to anyway. They had a decent shot at replicating that first turnover, where the open man was something of an illusion.

Turnover #7 was yet another of the same ilk -- in this case, Marreese Speights appeared to have ample room on each side to let off a nice long two (or, more likely, a drive to the basket and a kick-out to a then open shooter). The problem was, Griffin had just slid over to screen Curry, and had his eye on Speights for essentially the whole play -- when Curry's pass was a hair too slow, Griffin pounced on the ball and took it from midair before Speights or Curry had any idea what was happening. Turnover #9 was a lesser version of the same story -- it was more problematic than the others from Curry's perspective (as Curry really should've noticed Jamal Crawford bounding into the play), but he telegraphed the pass to a once-open man and it was (again) too slow to get past the scurrying gazelle in a Jamal Crawford jersey.

There were a few turnovers that were simply boneheaded no-excuse moves from Curry -- his second one was particularly stupid, where he drove the basket with David Lee trailing and delivered a no-look behind the back pass. Would've been a neat play, if Lee hadn't gotten caught on what appeared to be The Weakest Screen Of All Time. There's a reason no-look passes are generally a bad idea, Steph. You have to pay attention. Turnover #4 was of a similar cadence -- Curry's "bad pass" appeared to be directed at one of the courtside cameramen. (They don't really have a good angle for that shot anyway, Steph.) His tenth was simply a poor decision, passing to a definitely-open man in the middle without realizing that the only reason that man is open is because DeAndre Jordan was smack in the middle of Curry's passing lane with both eyes on the ball. And there were a few turnovers that weren't really Curry's fault -- his third one in particular, where Lee bobbles an inconceivably short ranged pass and Blake Griffin took advantage.

But there's an overall moral to this story, and it points to a very smart move from the Clippers. The Clippers honestly couldn't hope to guard the Warriors on offense -- even in the loss, Golden State shot 52% from the floor and 57% from three. Absolutely unconscious. Stephen Curry was effectively unguardable (scoring 38 points with a single free throw, a surprisingly rare game type that's only happened 4 times in the last 4 seasons), and virtually every time the Warriors managed to confuse the easily-befuddled Clipper bigs, an easy bucket resulted. But the Clippers seemed to be well aware that they didn't have the capability to consistently guard this Warriors team. And if that's the way you've got to play, your best bet is keep their blasé run-the-offense type possessions as low as you possibly can by forcing turnovers and keeping the action from challenging your big men.

The Clippers were clever, and by keeping just about everyone on the floor "aware" of Curry's passing at all times, they preyed on his often somewhat-low-speed passes and created illusions of open men to entice Curry into a doomed pass. This strategy worked on four separate occasions, which I'd consider quite the accomplishment if I was Doc Rivers. Curry only had 33 games last season with four turnovers period... and in this case, those four Clipper-orchestrated turnovers were alongside three "poor decision" turnovers, three "Chris Paul came to play" turnovers, and one where Curry wasn't entirely at fault. It all amounts to a career-high in turnovers for Golden State's star, his first double-digit turnover game since his rookie year, and (most importantly, to Doc!) a win over a division rival for a Clipper team that's gunning for a top-4 seed.

In essence, the Clippers took a poker bluff and made it a key component of their Curry-centric defense. They figured that Curry would realize the Clippers couldn't guard the Warriors and would leave certain obviously-open opportunities. Curry just assumed the open men were open because of defensive breakdowns rather than as a conscious Clipper decision. The Clippers certainly had their fair share of ugly defensive breakdowns throughout the night -- but their ability to use that to their advantage on several distinct plays served to be the difference in an extremely close game. For all the crap the Clippers get about their defense -- which, yes, may be deserved -- that was quite the clever move and worthy of a lot of praise.