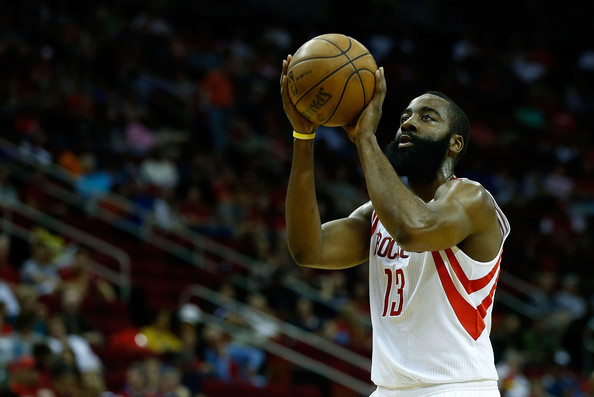 Last week, I wrote a tiny feature looking at some statistical quirks and odd happenings over the first week's action. To me, any time in the first month or two is a good time to be looking at NBA stats. There's not quite enough time for the trends to take on set-in-stone significance, but one can ignore them at their own peril. For just about every absurd statistical quirk that will fade as time goes on, the early season throws a truthful tiding or two to keep you on your toes. So, as an ongoing feature, I'm going to try and take a weekly look at some recent trends of note and take my best stab at determining whether they're fated to fade or a reflection of the new normal. I will also, at the bottom of the post, keep a running tally of the trends I've previously enumerated and their current status. My current plan: three new trends per week, and a weekly enumeration of prior trends. Let's get to it.

To the surprise of roughly no one, a team featuring both Dwight Howard (36 MPG) and James Harden (40 MPG) shoots a lot of free throws. The surprising thing about the trend is just how unprecedented the rate is. The Rockets are currently attempting one free throw for every two shots they take. That's an almost unprecedented rate. Seriously, take a gander at the all-time leaderboard for free throw attempts per field goal attempt (FTR). It's kind of hilarious:

To help you contextualize that, I've highlighted every team in the top 40 that didn't play in the 50s, as well as the only team from the aughts in the top 100 (congrats, Knicks! You win the prize!). Spoiler alert: there are only three teams in the top 40 from anything approaching a modern vintage, and the Rockets blow all of them out of the water. I know quite a few people who put the Rockets reasonably high in their "League Pass Team" rankings. Unless you're the world's biggest free throw fanboy, I have absolutely no idea why you would do that to yourself. They play at a fast pace from a pure "basketball statistical calculation" standpoint, but with half of that fast pace wasted on an endless parade of free throws, I have no idea why you'd turn away from a Blazers game or a Warriors game to watch Dwight Howard and James Harden play pop-a-shot at the free throw line into the infinite.

Will the Rockets keep this level up? I was tempted to say "no", simply because it's such a historical aberration, but I'm really not so sure. Hacking Dwight for free defensive possessions isn't just a Popovich thing anymore, and it seems like every coach in the league is trying to uncork the strategy once or twice a game. James Harden has always gotten a lot of free throws, and he's currently taking fewer free throws per 36 minutes than he took last year. The aberration is that the two of them are on the same team, not that this is a statistically untenable trend. So I'm going to guess that it actually continues. They might fall to the lower reaches of the top 10 if either misses time for injury, but I'd deem it a pretty good bet that Houston ends up with more free throws per shot than any team since the 1950s. If free throw rates were championships, Daryl Morey would have just put together the 1996 Bulls.

This one is one of the weirder ones. Last season, Lillard posted a relatively normal shooting line for a scoring point guard. He shot 42% overall from the field, but as most people realize, that number means almost nothing without some context for shot placement. Lillard was a good three point shooter (38%), a decent at-rim finisher (53% -- middling, but not bad at all), a decent shooter from the mid-to-long range distance (43% on a ridiculous 366 attempts), and a dependable free throw stroke (84%). It stood to reason that Lillard would probably keep those numbers steady this season, if not improve them. 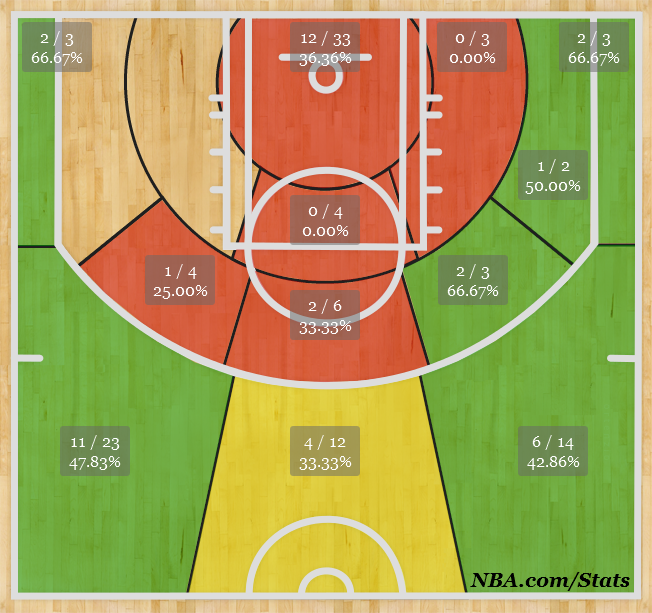 Seriously, where do you even begin? Lillard's current shooting stats are essentially a complete inversion of last season's numbers -- he's currently shooting almost 46% from three point range and a baffling 36% from two point range. His two-point numbers aren't being dragged down by a surplus of long twos, either -- he's taking fewer shots from between the paint and the three point line and more shots at the rim relative to last year. His true shooting percentage is actually higher this season due to his wild three point percentage, but that doesn't really explain his anemic finishing. Watching tape doesn't really shed any light on it either -- his shots look about as good as they did last year, they just aren't going in. Oh, and the best part: despite his wildly different shooting profile, his free throw numbers are virtually identical (84% last season, 84% this season). Good luck figuring that one out.

My best guess? His shooting numbers -- by midseason -- are going to invert and look about the same as his numbers from last year. His shot doesn't look markedly different and his three point shot -- while good -- isn't THAT good. Lillard isn't a 50% bet for threes taken above the left key. Sorry, but no. That said, his at-rim finishing will get better, for sure. And I'd take a bet that his long twos will too -- he took an absurd amount at a half-decent percentage last year, and I doubt he's going to continue his current run of futility there. Of course, there's also the upside/downside prognostications for Blazers fans -- the upside would be that perhaps Lillard really has improved his three point shot and is due for a reversion to the mean on only his two-point range shots, which would make him one of the best scoring guards in the league. The downside would be that perhaps Lillard is profiting from the same sort of early-season hot streak that Brandon Jennings seems to have every other year, and his troubles inside are a result of better scouting for his team and defense tuned to his play rather than a mere dry spell.

Okay, no, that's not entirely true. DeAndre Jordan takes that particular cake, at least to date. But Iguodala's free throw shooting is way, WAY more confusing to me. Here is the current league leaderboard for free throw futility (cut down to players with 2.5 attempts per game or more, as going to the line for a few shots a game seems essential to being the league's real "worst" free throw artist):

Seriously, cripes. There are only five players in the league taking a decent number of free throws a game and shooting under 50%. Ben Gordon is confusing too, but everyone else on this list is pretty self explanatory. Jordan has never had a free throw stroke worth a chia pet and Biyombo is similarly lacking. Henson, Howard, Plumlee -- all of them are big men who have well-advertised free throw problems. But Iguodala? To see this kind of a huge decline in free throw effectiveness from a player that's unchanged in all other aspects of his game is almost unprecedented.

And don't cut corners. This is a HUGE, huge decline. Iguodala's career mark from the line is 72%, but that's not without its higher points -- he shot 82% from the line in his third year and was above 72% in each of his first six years. Then he shot 69%, which seemed a bit odd, but not totally out of line. Then he shot 62% in his last year in Philadelphia, which is where people started noticing that his free throw percentage was definitely dropping. Then he shot 57% last year, when it started to become a huge problem and just about everyone noticed. And now he's one of the league's five or six best bets for any coach's pet hack-a-whoever strategy.

Not entirely sure where his Nick Anderson moment was, but I'm betting the Warriors are wishing he'd never had it. After all, Iguodala is the best perimeter defender in the league when he's locked in and he's integrated seamlessly into the Warriors' offense. But if that offense can get held to under a point a possession every time Iguodala gets fouled, teams are eventually going to start picking up on that, and Iguodala's playing time will suffer greatly as a result. Sort of ridiculous. And there's no real explanation for it, at least so far as I can find. While I'm guessing he'll recoup a bit, I've guessed that three seasons in a row and it's legitimately never panned out for me. Maybe he's fallen to the point where he can't possibly fall anymore? That's the hope, I suppose. We'll see.