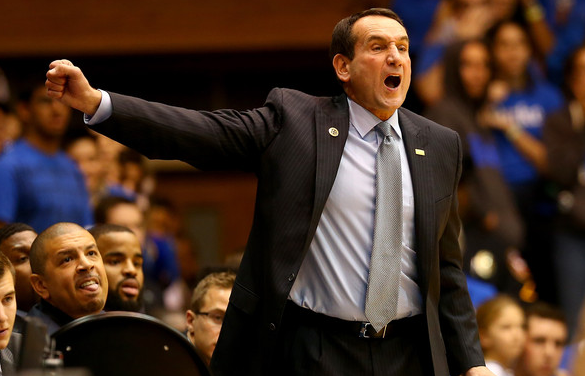 “If [tanking] is happening, shame on whoever is doing it. … As an American I wouldn't like to think that an American team would [ever] want to lose or create situations where you would want to lose,” he said. “I can't even fathom -- I can't go there. I can't believe that that would happen. Maybe I'm naïve and going to read a fairytale after this.”

How do you really feel, Coach? Say this for Coach K -- he doesn't mince words. Many of those who detract tanking couch their detractions in caveats. Bill Self expressed light disapproval before saying that he didn't believe it ever happened. NBA commentators often express distaste at the idea of "losing to win" a la tanking, and morality plays are common. But few people bring a jingoistic nationality play into it, and few people outright shame any team involved. He has a strong opinion. And I understand why seemingly every news organization has posted some sort of analysis or report of the quote. It all makes sense.

I'm fully aware of the humor in that line. Coach Krzyzewski is one of the finest basketball minds in the world. In terms of knowledge about the game itself and the shape of college's competitive sphere, he's nearly unparalleled. The man has won almost 1000 basketball games at the NCAA level. He's orchestrated two gold medals and a revitalization of America's Olympic basketball program. He's won four NCAA championships. He's won the greatest hair plugs known to man. (... Alright, maybe not that last one.) Still: Coach K is one of the greatest basketball minds ever, and it's a tall order to say that his opinion isn't particularly well informed on ANYTHING related to the game. But I'm game, so let's attempt it.

The main issue, in my mind, lies in the quite different motivations Krzyzewski optimizes for when he's solving the competitive calculus of the college game. Team building in the NCAA isn't just a tiny bit different than the NBA, it's essentially a completely different game. And the penalties for failure, insofar as a franchise or school are concerned, are unquestionably lower. The best way to think about this is to consider how long a failed move impacts your team. Let's compare two big ones -- on the college level, we'll actually use one of Coach K's failures -- his inability to entice John Wall to attend Duke University. At the NBA level, we'll look at Toronto's failed first-overall-pick of Andrea Bargnani back in 2006. Let's examine what both franchises lost as a result:

The key here isn't that Coach K's mistake didn't matter. It did, and anyone who tells you the 2010 Duke team wouldn't have been better if John Wall had been running point (or even playing shooting guard alongside Jon Scheyer) is nuts. And the point isn't that Toronto is a terrible franchise, or that their pick was even particularly bad. Bargnani seemed like a good pick at the time, and although he didn't pan out, these things happen. The point is more a reflection of the overall calculus behind decisions in the NBA. That is to say: virtually any personnel decision you make in the NBA is going to impact your roster for 3-4 years at a bare minimum. Sign a player? You're dealing with that contract over the duration of its lifespan, and that's (on average) 3-4 years. Draft a player? You probably just made a seven year investment, better hope it was a good one. Hire a coach? Unless you're the Lakers, you've probably tied yourself to at least a few years of leeway for the new guy.

In college, any mistake you make -- whether in recruiting, player development, or implementing a bad system -- is reasonably fungible. No player is going to be on your team for more than five years, and generally speaking, few game-changing players are going to be on your team for more than two. The impact of a bad decision is thus quite a bit lower. Missed out on John Wall? Who cares, it was just a year. Completely misused Andre Drummond for reasons passing understanding? Who cares, you get a clean slate the next year. Tried to implement a terrible offensive system that didn't fit your players? In two years, 75% of your team will have churned away, and with it all the habits and tics you mistakenly gave them will wash away as well. Mistakes simply don't matter as much to the decisionmakers in the college game, for better or for worse.

This works both ways, also -- if you're a smart franchise with good management and good coaching, the length of impact of a good decision can span just as long or longer. Just look at the Lakers and Spurs. One made a great move for Kobe, the other had a great tank for Duncan. Both of those moves have had sixteen years of profoundly positive impact for both franchises. Conversely, we'll go back to Coach K's 2010 season -- the player development and long process of molding Jon Scheyer and Brian Zoubek into lights-out NCAA players was a fantastic piece of work from Coach K and his staff. But they only really got to experience the tidings of their good work for a single season -- Scheyer was OK in the seasons leading up to 2010, but he only really came into his own in that final season. And Zoubek was little more than a running joke for his first three years. The year ended, Duke won the title, and Scheyer and Zoubek moved on. Scheyer tried and failed to make the NBA, settling down in Israel with Maccabi Tel Aviv. Zoubek started a cream puff dessert shop that recently closed.

But nothing more for Coach K, and that's kind of the point.

Tanking -- to me -- represents an NBA franchise that is actively sitting players and liquidating veterans for draft assets in an effort to accelerate a natural rebuilding process. That's my definition. I don't think it happens obscenely often -- perhaps one or two teams per season, on a large scale. I think it may be a larger problem this season than most, given the generally agreed upon glut of talent in the 2014 draft. But I'm of the view that most awful teams are simply bad because they're bad. It's not rocket science. There was no greater power that was holding Bismack Biyombo back and preventing him from being a great basketball player -- he simply isn't very good, and he still represented Charlotte's best option for a year or two. A team where that's the case is going to be pretty vile, and there are few avenues the front office really had to make the team better. But the teams that do actively tank draft position are -- in a general sense -- trying to avoid the depressingly long downside that a bad decision has in the NBA.

Understanding the longstanding impact of a bad decision is essential to anyone trying to get to the bottom of the NBA's tanking problem. An NBA team that makes a mistake on who they draft feels the repercussions for a long time. That period often spans an entire management staff's tenure. If one were to be hired as a new GM of an NBA team and one were to immediately make a poor decision with a high draft pick or a bad free agent acquisition, chances are reasonably high that the poor decision would outlast you in the organization. As it was with Bargnani -- he outlasted two coaches and a GM that (hilariously) won executive of the year twice. The NBA draft is one of the best pick-to-talent drafts in professional sports. The marginal value of a higher pick in the NBA is much larger than the marginal value of a higher pick in the NFL or the MLB. In basketball, the good players simply matter more -- they have more on-court impact and can make-or-break a franchise in the long term in a way that's more rare in the other professional sports.

And, of course, the rub: the way that a top prospect can makes-or-break a franchise for a decade or more is completely nonexistent in the NCAA. It's a ridiculous, absurd stretch from anything a college coach has to contend with. Period. I reiterate: Coach Krzyzewski is one of the greatest coaches ever, and disdain for his views on tanking has nothing to do with how good he is at his job. But I can't help thinking that Coach K's tanking views are less a reflection of a top basketball mind placing his attention on a grand problem and more a reflection of how vast the gulf is between franchise building in the NBA and program building in the NCAA. The motivations are as different as the game of chess and the game of darts. Does Garry Kasparov do color commentary for the World Series of Poker? Does Usain Bolt critique Michael Phelps from the booth? Did Rambo analyze Rocky's left jab?

Of course not. While all of those would be varying levels of awesome, they're all patently ridiculous. And maybe -- just maybe -- going to college coaches for thoughts on NBA team-building strategies is a tiny bit ridiculous too.