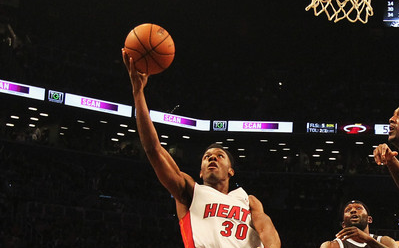 Last week, I wrote a second installment of a new feature looking at some statistical quirks and odd happenings over the prior week's action. To me, any time in the first month or two is a good time to be looking at NBA stats. There's not quite enough time for the trends to take on set-in-stone significance, but one can ignore them at their own peril. For just about every absurd statistical quirk that will fade as time goes on, the early season throws a truthful tiding or two to keep you on your toes. So, as an ongoing feature, I'm going to try and take a weekly look at some recent trends of note and take my best stab at determining whether they're fated to fade or a reflection of the new normal. I will also, at the bottom of the post, keep a running tally of the trends I've previously enumerated and their current status. My current plan: three new trends per week, and a weekly enumeration of prior trends. Let's get to it, then.

When you think of the Eastern Conference, it's not particularly hard to come up with names that sound like they should be all-star quality. Whether it's guards that made the all-star team before or have the unimpeachable all-star chops of a young player coming into their own, in the preseason, the thought was simple. The East's surfeit of talent had finally come to call, lifting the conference up into a tier of respectability heretofore unseen by man. Kyrie, Rose, Wall, Williams -- the talent was undeniable.

Here are a few things we know about all-stars. First, we know they play at least 30 minutes a night. Only one player has ever made an all-star game averaging fewer than 25 minutes a night, and only five have made it averaging fewer than 27 -- you need to be on the court for well over half the game to get consideration. Secondly, although this may surprise you, you generally need to have an above-average PER. Only 60 players have gotten an all-star bid in the past 60 years with a PER under 15, and only one of those occurred in the last 20 years. In general, you need to be at least marginally above average to merit consideration for a spot. Finally, the kicker -- your team needs to win, at least a little bit. Only 1 or 2 all-stars a season will hail from a losing team, and they generally hail from a team that's suffered massive injury trauma.

Having said all that, please take a look at the following table of the NBA's top 20 guard performances this season for those playing above 27 minutes a game, ranked by win shares. Please note: there are only 61 guards averaging over that minutes total. I've included a few below the top 20, with their rank next to their name. Because I am helpful, I have marked all western guards in red and all eastern guards in blue.

Seriously, what? There are only five eastern conference guards with above-average win-shares among guards playing 27+ MPG. Jeff Teague and Brandon Jennings are leading Eastern Conference guards in PER. Ray Allen, Arron Afflalo, and Mario Chalmers are leading Eastern guards in shooting -- add in James Anderson, O.J. Mayo, and Martell Webster and you have the only six eastern conference guards with a TS% over 55%. This isn't just a "below average" thing. Eastern conference guards have been an absolute horror-show in the early going, and none have been more disappointing than the conference's anointed preseason all-stars. Derrick Rose is currently sporting negative win shares and a PER of 9. Kyrie Irving's PER is barely above average and he's shooting identical percentages to DeMar DeRozan (seriously, look at them -- to date, both players are shooting 40-35-82). Deron Williams is barely averaging 25 minutes a night, and as such, isn't even on this list. Dwyane Wade is posting by large margin the worst numbers of his entire career and playing lackadaisical defense... and he's probably the most deserving all-star in the East's guard slate right now. It's that bad.

If I had to pick out who "deserves" an Eastern conference all-star spot right now, I'd probably err on the side of Wade, Teague, Afflalo, and Turner. Which is... special, let's put it that way. Much like last season, you can make a case for Jennings and Wall and Irving as Eastern all-stars. Unlike last season, it's not really that any of those three are playing anything even remotely approaching decent basketball -- it's simply that they aren't completely embarrassing themselves, and in this Eastern conference, "not embarrassing yourself" appears to be just about good enough to "deserve" an all-star spot. Conversely, look at the embarrassment of riches in the West. Parker, Paul, and Curry all look like locks, and their production has been phenomenal to date. But Mike Conley has been world's better than anything the East has put up, as has Klay Thompson and Andre Iguodala. As has Harden and Lin. And don't forget Lillard or Westbrook. Hell, Eric Freaking Gordon has been putting up great numbers compared to his eastern counterparts, and he's world's away from his first all-star selection in the West.

All this is to say: there will probably be five guards from the Western conference selected to this year's all-star game, and there will probably be four or five guards from the Eastern conference selected to this year's all-star game. Don't for one second think that the Eastern selection will mean quite as much as the Western selection, and don't for one moment forget that there are legitimately zero guards in the East that would currently make even a cursory cut for a Western selection.

That overstates it, but... sort of. After a year or so of scuffling in wanting for a point guard worth their salt, the Heat finally seemed to converge nicely around Chalmers in 2012. They haven't really looked back ever since -- and it must be noted that they really haven't needed to, as Chalmers has been decent enough to keep the show going without breaking anything and keeping things relatively tied down for LeBron and Wade to orchestrate the show. Chalmers isn't broken, so there's no real reason to fix him, yes?

Well, again -- sort of. Norris Cole was an abhorrent NBA player in his first few seasons -- bad at shooting, worse at running an offense, worse still at playing defense. He didn't really fit seamlessly into the Heat's system, to the point where he duplicated skills that needed no duplication and was bereft of skills that the heat needed dearly. So they buried him on the bench and the thought was that he'd take a bigger role when the time came that he'd finally learned how to run an NBA offense.

If early season numbers are accurate, that time might very well be now.

After noticing Cole's strong impact in the excellent Dallas game a few nights back, I took a dip into the stat-pool. Using Evan Zamir's NBAWowy tool, I took a look at how the Heat offense was faring under Chalmers and under Cole. The results were surprising. The Heat offense is scoring 1.08 points per possession with Chalmers on the floor, which is quite nice... but they're scoring 1.22 points per possession with Cole on the floor, which is borderline unholy. The difference is mainly due to differential shooting percentages -- they're shooting better from three and better from midrange with Cole on the floor -- but I admit that my main curiosity was whether the Heat were taking a different profile of overall shots with Cole on the floor. The answer: a little bit. Cole isn't much of a three point marksman, so the expectation should be that the Heat take fewer threes with him on the floor -- and they take marginally fewer. They take a few more midrange shots, but shoot significantly better from that range. They have more dunk attempts and more tip shots than they do under Chalmers, but slightly fewer layups.

Does this mean that the Heat should dramatically cut Chalmers from their rotation in pursuit of more production from Cole? Probably not -- Chalmers is still a better defender than Cole, even if he takes a lot of stupid risks, and there's something to be said for continuity. For my part, I don't think the raw difference in PPP is going to hold up over time. Although they're shooting better under Cole, they're shooting worse shots. That probably isn't going to lead to a sustainable gap between them. That said, both players have a very different way of running the game, and from an adaptation standpoint, it's always nice to have new options. I'd bet you anything Spolestra's already drawing up some new strategies to spring on teams in the playoffs using their differential styles to keep the opposing defense off guard. A bit of a scary development for the rest of the league, all things considered.

NOTE: I don't really have any explanation for this, but the Heat are actually being outscored with Chalmers on the floor, as opponents are averaging 1.09 PPP with Chalmers on the floor and 1.01 PPP with Cole on the floor. This is not a reflection of their defense, as Chalmers really is a better defender in space than his man. He does, as I said, take a lot of stupid risks... but on the whole he's a bit better than Cole. I don't really know what's up with that. Especially since Chalmers shared almost triple the minutes with LeBron/Bosh/Wade than Cole did. Not sure what to say about that, so I'm just going to place that here and let you think about it. Think about what you've done, readers.

Because I don't store data on teams by-division (and don't have a large number of years in my "team stats by year" personal database), I don't have many statistics on their historical comparables. But I do have a decent number of statistics on their overall performance to date. And let's be real, for a moment -- if things continue as they've played out to date, the Atlantic division may very well end up being a historically awful display of NBA futility. Some facts about the division:

The division seems incredibly awful, but I sincerely doubt this particular trend is going to maintain going forward. They've got one hilarious saving grace right now -- they haven't played themselves. So far, they've only played one intra-division game this season, a showdown where the Raptors beat the Celtics. The division will necessarily go 1-1 on every game they play against themselves, with a net margin of zero. This is going to drag their collective point margin closer to zero, and provide a consistent source of wins. Even if the division loses_ every other game they play this year_, they'll go 36-36 with a margin of zero on the 72 intra-divison games that they play. And, I mean, they can't possibly lose every other game they play... right?