Everyone loves March Madness. As we enter the NBA's least favorite time of the year, fans of the oft-maligned professional league are constantly reminded about how well the NCAA accomplishes something that the NBA's never quite been able to muster. That is, the twitchy oversimulated madness of the NCAA tournament's one-and-done stylings. The tournament, at its best, is a several week supercharge of the NBA's "league pass alert" nights with 1 or 2 crazy games on at once.

In Zach Lowe's column on tanking yesterday, he offhandedly noted that one way to increase the underdog benefits of being a lower-seeded team in the NBA playoffs would be to decrease the number of games in a series. He has a point. In almost any situation, the easiest way to inflate your variance is to lower your sample size. Many of the smartest NCAA bracket predictors bake in adjustments to account for the fact that teams like Bo Ryan's Wisconsin Badgers play at a deathly slow pace, slow enough to increase the inherent variance in their performance. This can lead to obscene pace-adjusted blowouts that break projection models (see: their numerous 30-40 point wins in 2012 that legitimately broke Ken Pomeroy's ranking system), but it also can lead to a game where the Badgers simply don't have enough possessions to prove they're the better team (see: their near-upset to Vanderbilt one game before nearly beating a fantastic Syracuse team in the 2012 tournament).

The NBA, though? It's one thing to say "hey, let's decrease the number of games in a series." It's quite another to actually figure out how that would impact things. Thing is, this isn't actually all that hard to check. So long as you have the right data. Luckily, I have exactly that. I've got a lot of data lying around that I can manipulate like this, and the question bugged me. This post endeavors to answer that very question -- if the NBA playoffs were a single elimination tournament, how would the course of NBA history change? I went back a decade, but given the size of the images, I'm probably going to post the specific brackets for five years and share the other five (and further) in a later bracket-dump post of the 80s, 90s, and early 2000s. For now, let's go back and look at the last five years. The results are, if nothing else, hilarious.

As for the methodology here, it was surprisingly simple. Playoff seedings remained the same, but each existing series was decided by the first game in the series. For instance, the Spurs and the Heat still made the finals in 2013 under a first-game-wins scenario -- as such, the Finals were determined by San Antonio's 92-88 win in Game #1. When the series DIDN'T exist in reality, the series was decided by the first regular season game that was played with the home court configuration that would've been at play. For instance, in 2012, Chicago's new second round series against Atlanta was decided by a January 3rd win where the Bulls defeated the Hawks at home. That's about all you need to know. Let's get to it. 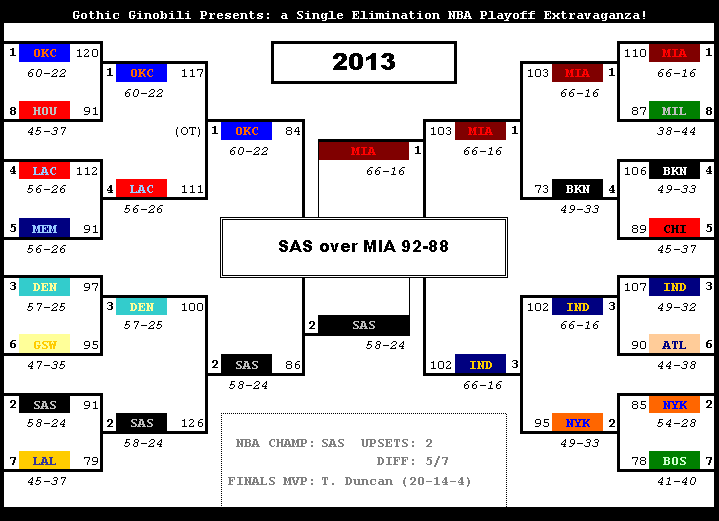 For the first single elimination tournament, we actually see three fewer upsets than we saw in the actual playoffs. Oklahoma City beats Memphis, as they won the first game of the series behind Durant's heroics. Golden State similarly falls to the Andre Miller-led Nuggets. And Chicago falls to Brooklyn. Of course, that doesn't mean much for Denver, as their first regular season meeting with San Antonio was an embarrassing 26 point blowout in San Antonio. And it doesn't mean much for Brooklyn, as they lost their first matchup with the Heat by 30 points. The Spurs beat the Thunder in the WCF due to their win in the first game of the season. Out of the decade I've looked at so far, this is the only year where the Finals matchup actually stayed in tact. Were the Finals to end after a single game, Duncan would've probably won the Finals MVP with a 20-14-4 performance. That said, a single elimination style bracket doesn't seem to do a whole lot to 2013. What about 2012? 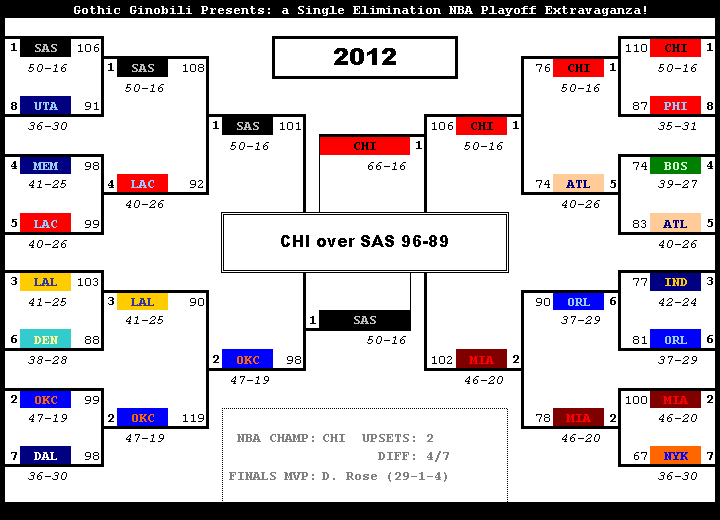 This one was actually pretty interesting. Due to the way I was assessing winners (that is, with regular season matchups), the Bulls technically had Rose for this entire playoff bracket. There were a two big upsets here that didn't happen in real life: Orlando over Miami and Atlanta over Boston. (NOTE: There's a typo on the MIA/ORL series -- MIA wins it 90-78, not ORL.) In the west, things actually go almost exactly the same as they went in reality -- the only thing out of wack was the WCF, where the Spurs won due to winning Game #1 of the actual series. In the East, Chicago romps the competition and makes it to a finals matchup with San Antonio. The Bulls win in what essentially amounted to a bracket made of chalk. Rose wins a tepid Finals MVP over Noah for his 29-1-4 game. 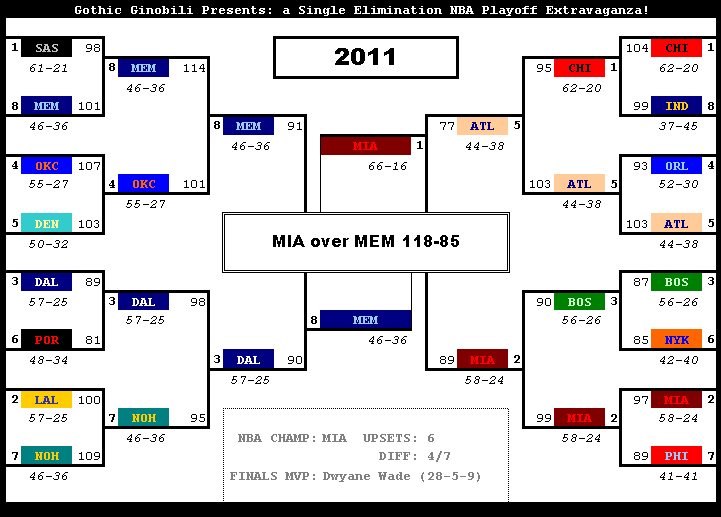 Here's the first one where upsets completely change the complexion of the bracket. The East stays untouched through the 2nd round, but Atlanta upsets Chicago in the Elite Eight and ruins the brackets of statheads everywhere. Meanwhile, in the West, Dallas is the only top-3 seed remaining after round one after the Hornets upset the Lakers and the Grizzlies upset the Spurs. The Grizzlies (America's team!) keep it going by upsetting the Thunder and the Mavericks in quick succession, becoming the first eight seed to make the finals in quite some time. (Not since Houston -- I don't think Houston makes the Finals in this scenario, but I haven't gone back to check yet.) Regardless. Miami makes it to the Finals and roundly obliterates Memphis for LeBron's first title in Miami. In a funny reflection of real life, Wade wins Finals MVP after LeBron's disappointing game. 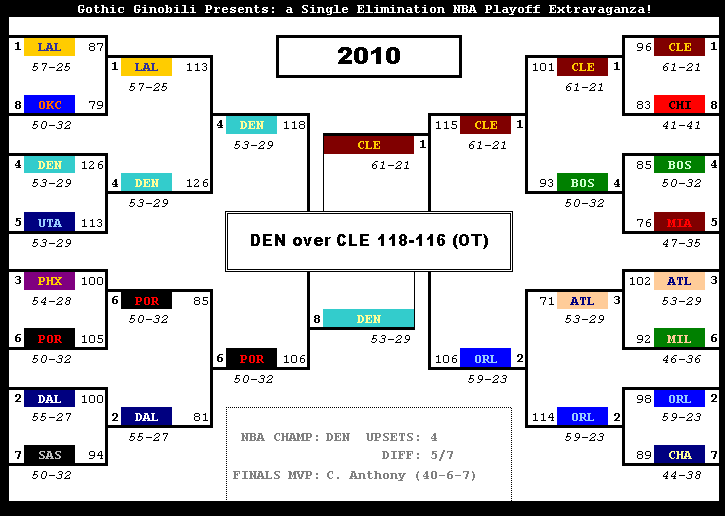 Look, it's our first overtime finals!

This one ended up being quite a bit different than the way things actually played out -- other than ATL/ORL and BOS/CLE, none of the other series actually ended up mirroring real life. The Blazers upset the Suns in the first round, then keep it going by rallying in their Elite Eight matchup in Dallas. (No, really. They were down 4 entering the fourth -- they took a lead with 6 minutes left in the game and held on in a wild one to pull it out.) Meanwhile, the Lakers suffer a disappointing end to the Denver Nuggets, who stomp into Staples and end their one-seed dreams. Denver makes use of their surprise four-seed home court advantage in the Western Conference Finals by dispatching Portland in short order, getting the LeBron/Melo matchup we all wanted to see. Melo gets the better of LeBron this time, leading his Nuggets to a 118-116 overtime win in the Championship game. Melo scored 40. 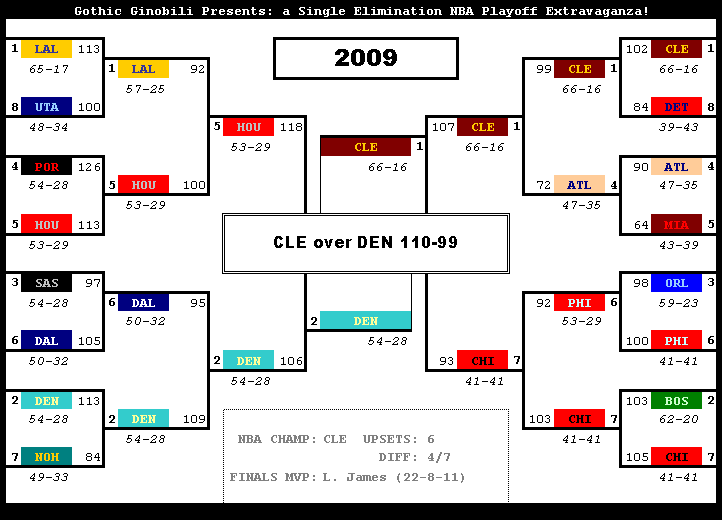 The story is essentially same as the one we saw in 2010, just with a different ending. This time we see a lot more upsets -- the Sixers upset the Magic and the Bulls upset the Celtics (and then the 41-41 Bulls upset the Sixers!), while the Rockets upset the Blazers and the Lakers in quick succession. The Nuggets, meanwhile, make it all the way to the finals against LeBron's Cleveland Cavaliers. (Yes, that means a single elimination tournament would've produced two consecutive Denver/Cleveland finals.) This time, LeBron's Cavs roundly upend Melo's Nuggets, with LeBron getting his first ring and his perfunctory Finals MVP for a workmanlike 22-8-11 game. Mo Williams scored 24, Ben Wallace shot 100%, and Billups scored 26. Fun times.

Tomorrow, I'll share five more years of brackets (including... a Detroit threepeat?!) and some collected statistics for the "single elimination" playoffs as compared to the NBA's more traditional seven game version. Stay frosty.