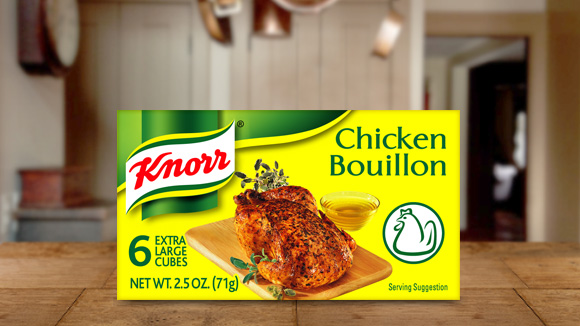 NOTE: Technically, broth and stock are different things. I realize this. For the purposes of this post, I am also totally ignoring this important fact. Sorry, foodies.

Boullion is one of my favorite things. Nah, not the boxed stuff -- the real deal. The kinds of stay-at-home stocks that take a ton of hands-on effort, where you buy a ton of aromatics and simmer off a beautiful homemade stock that brightens every soup or reduction you make in subsequent weeks. (Or, if you're not a vegetarian, the kind where you buy a bunch of unloved chicken pieces and some gelatin and turn it into God's gift to liquids.) That's my jam. You can't always have a stay-at-home stock, of course -- sometimes you need to resort to boxed stocks. Oftentimes you have to resort to bouillon cubes, those overly salty flavor bases without texture or complexity. Sometimes, in darker hours still, you find yourself in a kitchen bereft of any of better option and need to resort to canned stock. Those are the hard times. The painful hours.

In this post, I will isolate one man's opinion about the varied classes of stock in our noble league. Who's home-made? Who's a suitable workaday stock from a box? Who's a salty over-seasoned mess? I'll highlight one representative example from each class and split the rest of the league between these slightly confusing tiers of watchability and talent. The league's stock is coming to a boil, and it's time to take its temperature... because it depends on your altitude, since boiling point changes with altitude. This is the stock report everyone wants to read in the winter. Jim Cramer, eat your heart out.

STOCK DEFINITION: The crème de la crème of stock. Lightly simmered and carefully constructed, the perfect home-made stock is rich without the overpowering saltiness of its lesser iterations. Perfect for virtually every cooking application you can imagine using broth in, and perfect for a few things you can't. This is the stock you can't miss.

If I'm looking for the 2015 season's best overall experience, I'd have to start with the Golden State Warriors. They've got it it all. They've got the fundamentals at their back, with a compelling west-heavy schedule and a competitive division race against the Los Angeles Clippers. They play fun basketball, pushing the tempo at the NBA's fastest pace and featuring (in this man's opinion) the most entertaining player in the NBA's top five with Stephen Curry. His three point accuracy is legendary, and even his dumbest game-by-game mistakes (his often inane turnovers) are fun to watch in a slapstick comedy sort of way. They feature two of the NBA's best defensive players (Bogut/Iguodala), both of whom are fun to watch even when their offense is flailing. They feature Klay Thompson, who's been the NBA's best shooting guard in the early reaches of the season. And they feature one of the best uniforms in the league. As a full package, the Warriors are almost unbeatable. So they'd head up this category. As with real life, home-made stock is hard to come by. There aren't that many other teams that deserve this lofty designation.

The only other two that come to mind: The Portland Trail Blazers and the Dallas Mavericks. Neither of them are quite as good of a team as the Warriors, at least in the early season, but they're very nearly as entertaining. The Warriors generally win on the strength of their defense -- Portland and Dallas both claim a blitzing offensive attack as a mark of their triumph, and it's been a lot of fun to watch. Portland's offense is roughly the same as last year, bolstered slightly by an improved bench and some inspired play from the fill-ins for their stars. (Really, Stotts was able to fill Allen Crabbe and Meyers Leonard for Batum and Aldridge off a few recent injuries. Everyone's getting better!) As with the Warriors, they're a full package -- contention, watchability, and interesting (if not perfect) play on both ends of the floor. The Blazers don't have nearly the defensive chops that Golden State sports, but this year they've upped the help defense and shored up some of their larger-scale defensive problems that torpedoed them against the Spurs last year, and they're a tiny bit more balanced. They're a team to watch.

The Mavericks are a special case. Part of what makes them so interesting is their utterly horrible defense -- I'd consider Dallas one of the league's best bouillon teams regardless. Their offense is that good. The distance between Dallas' top offense and the #2 offense in the league (Toronto) is equivalent to the distance between Toronto and league average (Memphis). They're playing offense on an entirely different level than anyone else right now, and exceptional edge cases like that can override a few serious flaws. Also, as noted above, fulfillment and failure are never completely separate. It's not simply THAT you fail, it's HOW you fail. From that perspective, Dallas fails in a way that's fun to watch -- you're almost always looking at the opposing team's best foot forward on offense, and their defense is so bad that it circles around and becomes fun. A must-watch.

STOCK DEFINITION: When you're looking for stock, boxed stock is usually your second best bet. Absent the tinny flavor of canned stock, boxed stock generally doesn't last quite as long (not as many preservatives) but the grotesque aftertaste fades. Hardly perfect, but good in a pinch. For this definition, we're going with the best possible boxed stocks, the ones where you can taste the different ingredients that went into the stock and reduce it a bit without turning your food into a salty mess.

When you're trying to analyze a league or a group through weird analogies, it's usually pretty easy to identify a league's best-of-the-best and the worst-of-the-worst. It's much tougher to look at the landscape and figure out the gradations between those two designations, especially since the best and the worst encompass only 4-5 teams. Never fear, however -- in the early season, there are a few distinct classes of teams within the "not quite home-made stock, but certainly not bad" designation. To wit:

The world of boxed stocks is dangerous. It's hardly as can't-lose as a well-crafted homemade blend, and although there are good ones, there are some real problem children among them. But you can find some beauty if you look hard enough, and there's usually one or two delightful notes in any boxed stock worth its salt. Drink these teams, readers. Drink without regret.

STOCK DEFINITION: The nice thing about bouillon cubes? They last. You can keep a box of bouillon cubes in the cabinet for months or even years at a time. The highly concentrated vegetable/chicken/beef dust of a bouillon cube reconstitutes into a salty stock when you add boiling water. It's almost magic. Only ALMOST, though. The final result almost invariably tastes like it came from a cube, and it's worse off for it. Good in a pinch, but bad to rely on.

This section is much smaller than the above section, because the main identifying feature of a bouillon cube as compared to a boxed stock or canned stock is the delightfully long storage period. Liquid stock simply doesn't last as long -- even if canned stock is usable after its expiration, it takes on a progressively more metal taste as time goes on and it absorbs flavor from its packaging. And boxed stock necessarily can't last quite as long as either of them. Ergo, cubes represent the intersection of canned stock and boxed stock, not quite good enough to make out the different flavors but a fair step above the worst of your stock options. Before the fans kill me, I'M NOT SAYING ANY OF THESE TEAMS SUCK. They're good teams. But as of yet, they're unfinished products whose results will make much more sense in retrospect than they do in-the-now. And for various reasons, they're all kind of crappy teams to watch at the moment, even if we all expect they'll have more lasting flavor than some of the above teams. Hence, the NBA's three bouillon cubes:

STOCK DEFINITION: The bottom of the barrel. Canned stock is gross. It's overly salty to help it preserve longer, and it has no real inherent flavor of its own. As Ms. Humes discovered in her exposè on the different types of chicken broth, canned broth can have a deceptively rich first sip before the aftertaste mellows on your tongue and you realize MSG is the #1 ingredient. And take it from a vegetarian -- the story is even worse with vegetable broth, with the canned stuff tasting like liquified burnt rubber. Just disgusting stuff.

You know how you could theoretically create a serviceable homemade soup with 1 or 2 boiled vegetable or meat elements in any of the above stocks? You can't really do that with canned stock. If I'm forced to use canned stock in my cooking, I try and douse it with herbs and spices, and generally use only a few drops of it as I rely on my aromatics to seize the day and carry me to the promised land. The teams in this designation (... a lot of them, let's be honest) can't hope to carry your TV night by themselves. They've played truly uninspired basketball to date in the 2015 season. You can make a dish with these teams, but you have to add some other things too.

Like... copious amounts of alcohol. Gambling. All-encompassing fandom for any of these 14 teams. You need to do SOMETHING else. Because as a non-fan, watching games between these teams is sort of like pulling teeth, at least so far. And I have to emphasize this -- uninspired is not simply a synonym for "bad." There are good teams here too. But they've all been uninteresting above all things, at least to these eyes, and their performance has been (in most cases) disappointing and drab. To wit, the teams in this designation (ordered by SRS):

THE NBA'S HOT WATER WITH NO ACTUAL STOCK ELEMENTS

STOCK DEFINITION: This is not a stock.

No, boiling water isn't stock. It really, really isn't. If you go to a restaurant and are served a plate with naught but boiling water, you will complain. Because it's not stock, it's not soup, it's not... anything, really. It's just boiling water. It's fundamentally separated from our idea of a flavor base because it is inherently lacking in flavor. Hot water thrives off the absence of flavor, not an abundance of it.

So, obviously, that's your Sixers. Welcome to the 2015 season, Philadelphia!