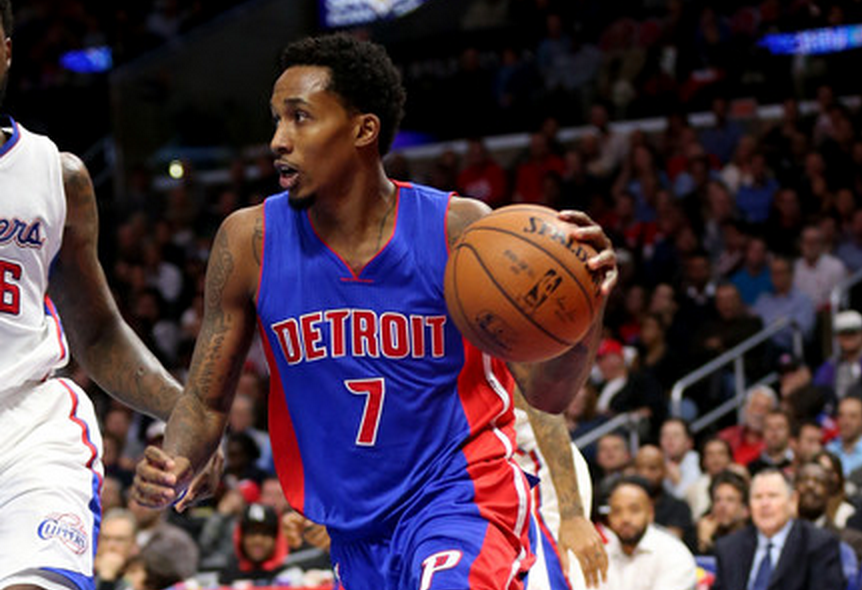 On Wednesday night, Brandon Jennings went nuts in one of the most unexpected virtuoso performances of the season -- a 20-20 points/assists night against the Orlando Magic. You'll be excused if you forget the last time the NBA's seen a 20/20 performance -- it hasn't happened for over five years. And it's been getting less and less likely over time, too. Check out this histogram tracking the number of 20/20 games since the 1985 playoffs: 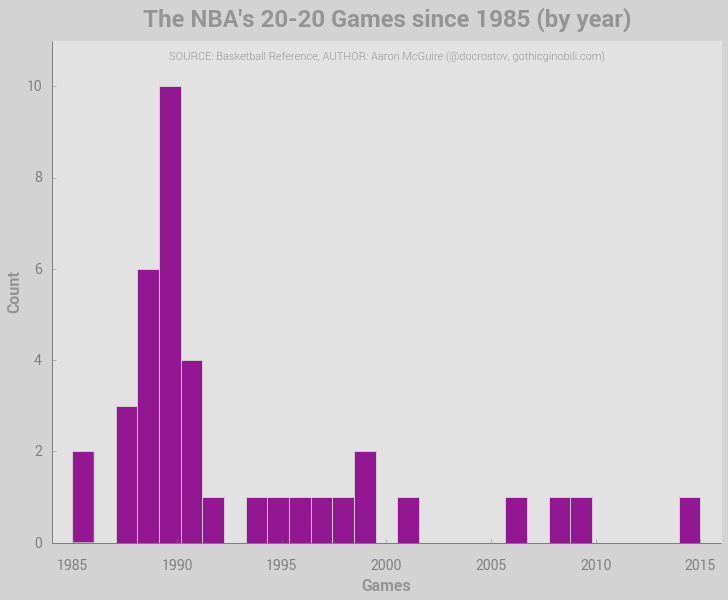 So, no, this isn't something that happens particularly often. Personally, I've always been one to roll my eyes at statistical achievement based on arbitrary several-stat benchmarks. The more statistics you add to your criterion, the less likely an individual player meets them. It's simple mathematics. Even if you create a completely mundane four stat cutoff, simple exclusionary skillsets make it less likely a player meets them. (As an example, no player in the 2015 season has put up a 13 point, 8 assist, field goal percentage > 60%, 3+ block game. If you find me one person in the world who knew that before I said it, I'll buy you migas.)

But in a flood of arbitrary parameters, the 20/20 barometer is one of the least arbitrary. The concept of scoring and the concept of assists are clearly separate, but the platonic ideal of a point guard has always involved involved an offensive fulcrum who was as likely to set up a teammate as he was to take the open shot. Sure, there have always been pure point types like Rajon Rondo who eschew scoring in favor of gaudy assist totals, but having an offensive zero at the point guard position has always been something of an anathema to a fully-functioning offense. It's like giving the defense a cheat code that lets them throw extra defenders at each play's best action. You can certainly win that way, it's just tougher.

You can create a successful offense with a burst scorer at point guard. And you can create an offense with a dyed-in-the-wool playmaker at point guard. But the very best offenses -- think historic-type jams that define eras and rewrite the game (see Nash, Stockton, Magic) -- function best with point guards who can score on their own but distribute the ball a bit more than they look for their own scoring. Which, not coincidentally, is the exact type of point guard a 20/20 game represents. A point guard who achieves a 20/20 has produced at least 60 points (in the case of Brandon Jennings, five of those assists were on threes, so he produced 47 points from assists for a total of 71). The average score of an NBA game is roughly 100 points per game this season -- that's almost two thirds of your offense coming from a single player. It's a point guard operating at maximum bore.

In the last 29 years, the league has seen 38 games with the assist-focused 20/20. If we want to find a rough likelihood, we can start by figuring out a few bounding conditions. To that end, here's one really obvious one: you have to start the game. Zero of the league's 20/20 games came off the bench. It makes some sense, if you think about it -- coaches in the NBA find occasion to ride bench guys through good performances, but normally those performances come in a vacuum. Scoring performances, defensive dominations, et cetera. There have only been a handful of players who dependably produce burst-assist games off the bench in NBA history -- and recently, only Manu Ginobili, J.J. Barea, and Sergio Rodriguez dependably fit that bill. And their career highs off the bench are 15, 14, and 12 respectively. Not really in spitting distance of the minutes or productivity you need to net a 20/20. You need to be a point guard, or at least the team's primary distributor. And you need to be playing for an NBA team.

We could build out a simple model for an exact likelihood, but that would involve a lot of data gathering. Let's do a simple one instead. We know that we've seen 38 of these, and we know you need to be a starting primary distributor. You have to be playing for an NBA team. Therefore, we can find single year incidence rates with the following equation:

If you aren't familiar with conditional probability notation, Pr(TTG | Y = 2015) indicates the probability of any randomly selected game of the season is going to be a 20/20 given the year is 2015. To define variables:

Put it all together and you get "XATSG", the newest chemical compound in Coca Cola.

Wait, no. Put it all together and you get a probability of 0.0007, meaning that one in every 1,278 games from a starting point guard is a 20/20 if you're looking at this season alone. Lucky for us, we have 30 years of data, so we can calculate an approximate probability of a 20/20 games over the past 29 seasons assuming the player at hand is an NBA starting point guard, giving us a reasonably solid estimate of how likely any individual starter has a 20/20 game, exogenous of knowledge about that starter.

Obviously, this is a flawed estimate. It ignores a whole boatload of important factors, like Jennings' own stats at the time of the 20/20. But it's a reasonable bounding estimate. The NBA has had one 20/20 game for roughly every 1,760 starting distributors in the past 29 years. 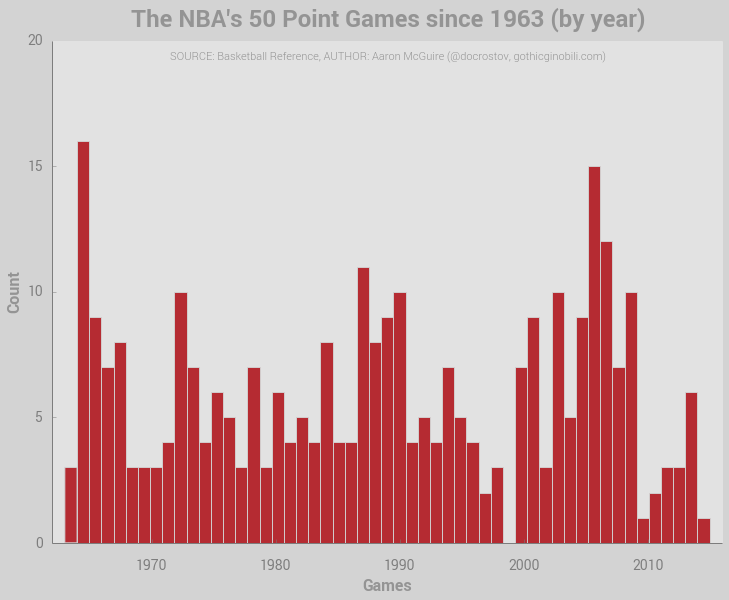 As above, this is a histogram showing the incidence by year of 50 point nights. You can see three places where individual players had ridiculous years that stretched the distribution a bit -- Wilt's biggest full season in the sample (he had 14 nights at 50+ in 1964), Jordan's late eighties (18 out of 27 fifty point games from 87 to 89), and Kobe's lonely years (15 of 26 in 2006 and 2007). Overall, though, there are obviously more fifty point nights than 20/20 nights. The 20/20 is clearly looking more unlikely on its face. But... what if you restrict it to the NBA's point guards? 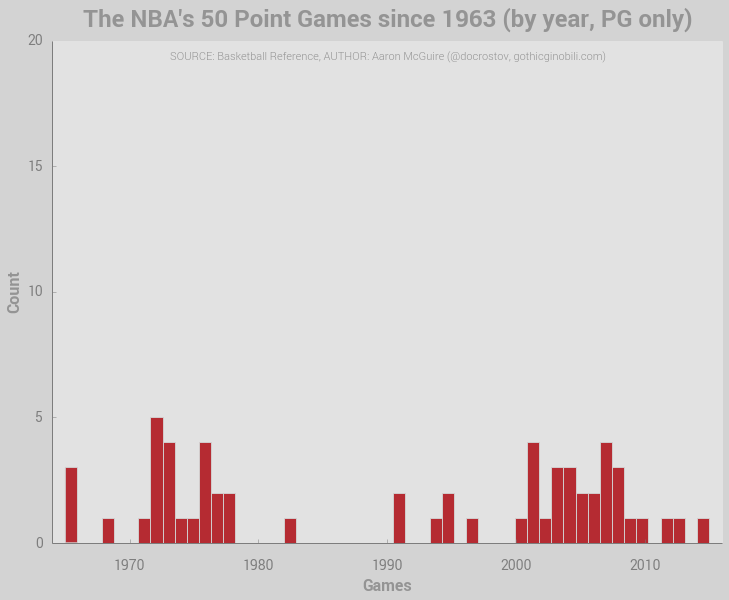 Now that looks more like it. All things considered, it's actually pretty dang unlikely for a point guard specifically to score 50 points in the modern NBA. More likely than it was in the 80s and 90s, sure, but the incidence rate is extremely low. Using the same calculation as we did before...

... we find that Brandon's 55 point outburst was almost completely indistinguishable from his 20/20 night. Seriously. The 20/20 game's odds were approximately one in 1760, the 55 point game's odds were approximately one in 1755. By the slimmest of margins, the 20/20 game was slightly less likely. But given that we're using approximations for both of them anyway, I'd err on the side of them being effectively equal, especially since we're by definition using two conditions on the 20/20 games and just one on the 55 point night.

Hence, when Jennings was talking after the game about how he held a slim preference for his 55 point night over his 20/20 night, even from a probabilistic standpoint, there was really nothing unreasonable about it -- his 55 point explosion is no less rare than his 20/20, and visa versa. It's a matter of personal preference.

One last note, because this didn't really fit anywhere in the post. There's one other thing I find particularly impressive about Jennings' performance on Wednesday. Jennings produced his 20/20 game in 33 minutes of play. Want to know how unlikely THAT particular incidence is? It's literally never happened before. The lowest minutes played of any other 20/20s in my dataset is John Stockton's 34 minute 22-20 night in 1989. Magic had a 35 and Nash had a 36, but 85% of the NBA's 20/20 games came from players who registered 37 minutes or more on the night.

Just a ridiculous performance, and one of the best games of the season from one of the NBA's most interesting journeymen. It's gonna be fun to watch Stan Van Gundy in the playoffs again. Maybe Jennings will add another one to the ledger put up one of those legendary 13 point, 8 assist, field goal percentage > 60%, 3+ block games I mentioned earlier.