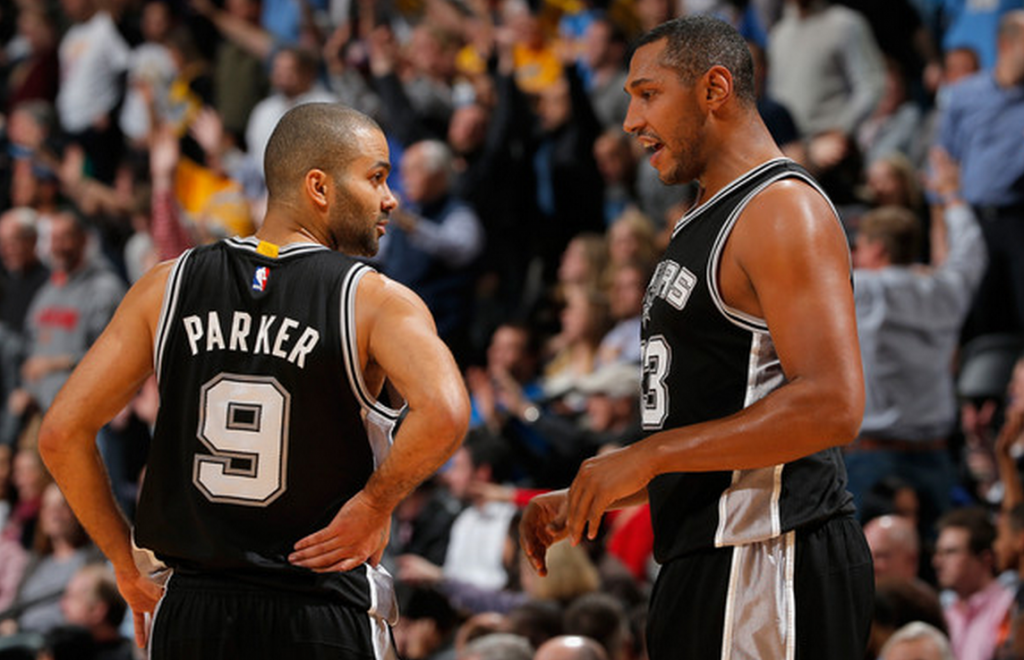 Stats for this post were provided by Basketball Reference, NBA.com, and magical stat pixies.

Look, Tony Parker hasn't been playing very well this season. It doesn't really matter how you look at it. Whether you're looking at an on/off court perspective, basic counting stats, or SportVU-type detailed breakdowns... he's just been rather mediocre. Bad, even. How bad? Let's find out.

Virtually everyone is aware of the on/off impact that Kawhi Leonard has had this year with the Spurs. When Kawhi's on the court, they've played excellent ball. When he's not, they've been... shaky, to say the least. Fewer are aware of the fact that Tony Parker's on-court presence has been essentially the opposite. With Parker on the court, San Antonio has been outscored by one point. Their defense has been atrocious and their offense has been below par. With Parker off, they've been absolutely excellent, outscoring opponents by 7.6 points. Here are some simple numbers on San Antonio's team performance with Tony Parker on and off the court from the current season:

Correlation does not equal causation. The fact that the Spurs rebound a little worse with Parker on the floor has very little to do with Parker. But there are a few things that Parker (as San Antonio's primary ballhandler) is directly involved in. The team's shooting (which has been worse with Tony on the floor), the team's assist rate (slightly higher), the team's turnover rate (slightly lower) and the overall offensive rating (which has been 2.4 points worse with Tony on the floor) all have varying degrees of connection with how Tony plays the game. And the defensive rating helps express the massive drop-off between Tony and Cory Joseph (and, frankly, Tony and Patty Mills -- both Patty and Cory have beaten the pants off Tony defensively this year). Put it all together, and you get a not-so-pretty picture. It's been a bad year for Tony. Worse yet, it's part of a trend. 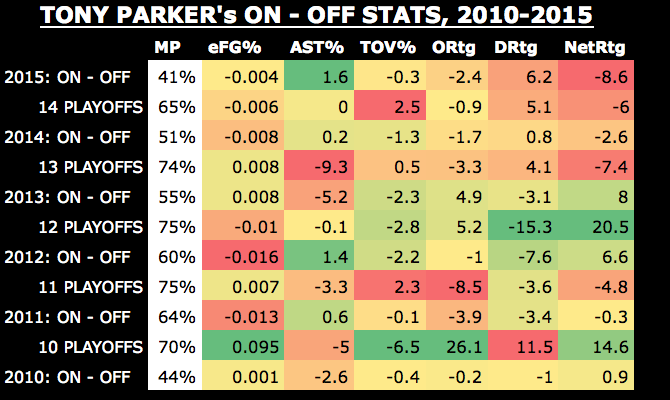 This chart shows the on minus off performance in each of the metrics above. As an example, compare the 2015: ON - OFF column to the chart above. Note that eFG is calculated by 0.505 - 0.509 = - 0.004. Same is true of all the columns. Red indicates something that's bad for that column (for instance, the Spurs defended 11.5 points worse per 100 possessions with Tony on the court in the 2010 playoffs), green indicates something good (the Spurs net rating was 20.5 points per 100 possessions better with Tony on the court in the 2012 playoffs), and yellow indicates mediocrity or generally something close to zero. You'll note that with the singular exception of this year's increased on-court assist rate, Parker's play has been more detrimental to the Spurs this year than it's ever been in San Antonio's recent run. The past few years has seen a steady erosion of Parker's value. They've played better with Parker off the court than they have with him on it ever since the 2013 regular season. You know, two years ago.

There are a bunch of mitigating factors that should be considered here. To specify:

All those factors considered, this still isn't good when it comes to this season's performance. Perhaps it's enough to explain and mitigate his performance last year, but not when the difference is as drastic as this year. Parker's performance has also overlapped highly with most of San Antonio's best performers this season, which makes it harder to justify the bench mob talk.

The minutes columns show the number of minutes the two players have shared, as well as the percentage of the player's minutes that those represent as well as the percentage of Tony's minutes that those represent. The green/underlined number indicates whether the teammate had better on/off impact with Parker on the floor or better overall, using net efficiency per 100 possessions. For instance, the Spurs have outscored teams by 4.0 points per 100 possessions with Duncan on the court, while they've outscored teams by 4.4 points per 100 possessions with Duncan off the court -- hence, their net + / - with Duncan on the floor has been -0.4. With Parker, his net + / - has been +1.3 in 712 minutes, which is higher than Duncan's overall net + / -. Which is good. Duncan/Parker is a better two man team than Duncan alone.

Unfortunately, the same isn't true when you look at almost every other player on the Spurs. Aron Baynes also has had a slightly more positive impact when working in synergy with Parker than he has alone, but results have been worse with Parker than without for everyone else. Danny Green's three pointers drop less when Parker's setting them up. Leonard's defensive impact gets stalled by having to make up for a two-steps-slow Tony. Even the much-ballyhooed French connection with Diaw and Parker has stalled out, with both players playing worse with Parker and Diaw on the floor.

On/off numbers are great for teasing out lineup impact and basic player influence, but an individual player's per-game box score contributions can shed light on how the player is making his mark on the floor. Or, in Tony's case, how the player is operating well below expectations. Stat-by-stat, relevant ones only: 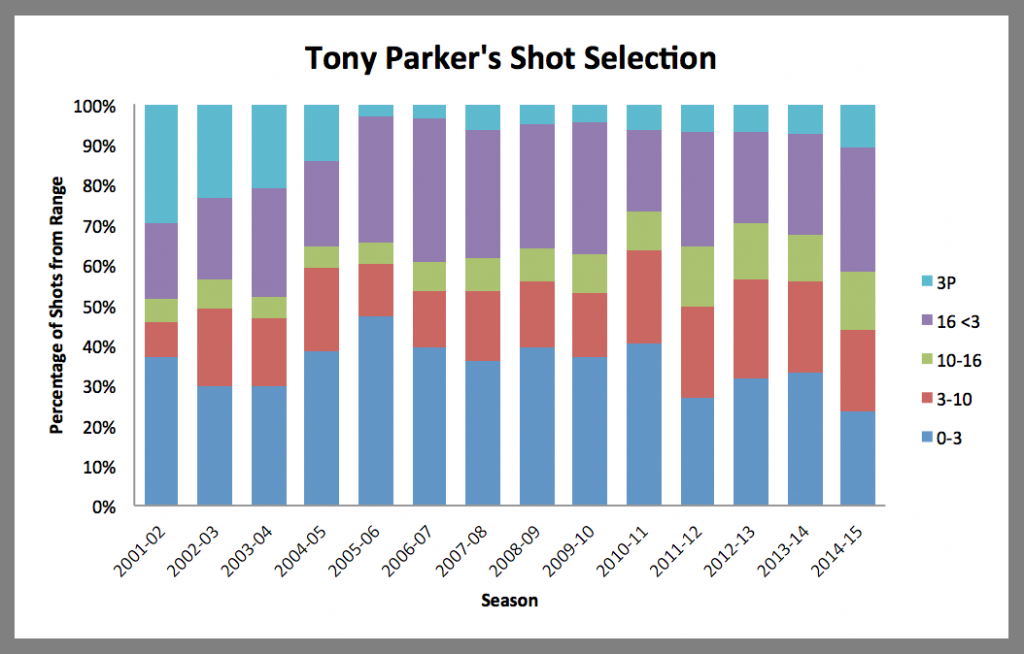 Once again, it's trending in a bad direction. He's having more trouble getting to the rim this year than he's ever had in his career, and he's relying more and more on his long range game. One could argue that part of the reason for this is his absurdly good three point bombing this season -- Parker's made over 50% of his shots from three this year, nearly 15 points higher than his previous career high over a season. Early in the year, this was a source of solace for Spurs fans eager to consider the possibility that Parker had added a shot to his repertoire.

Count me as a naysayer. Watch some of his threes on the NBA Stats Site -- he's draining wide open threes, as he's always done, but he's still got the same weird hitch in his shot that kept him from being a volume shooter from beyond the arc. It's part of what traditionally makes him so good at long twos, but it's always thrown off his three point shot whenever there's an ounce of pressure. Over 50% of Parker's three point shots come with over 6 feet of space. Sometimes a player will go on a good run and inflate their stats. That's my take on Tony's aberrational three point gunning. Nothing in his form has changed so much that I'd expect him to make that kind of a percentage on his threes. And from a playoffs perspective, it's wildly unlikely he'll be looking at shots that open against any reasonable defense. Parker's improved three point shooting can help carry his regular season stats, but it's not going to be much of a boon come playoff time.

This post is already going a bit long, so I'll make this part short. Here are a few nuggets from his SportsVU profile that stand out.

Some terrible, awful, atrocious analysts have spat obscenities and foretold doom about Parker's play before. He's generally made them look silly. In fact, he's made them look SO silly in the past that people often seem tentative to criticize his play. Much like the Spurs as a whole, there's a decided hesitance to call Parker on his poor play. The guiding assumption is that Parker is eventually going to stave off the cobwebs and return to his scintillating performances he's known for. And articles pointing out his poor return from injury or his tentative steps are going to be out of date in no time flat.

Individually, none of these stats are gospel. Indeed, there are reasonable contextual reasons you could expect one or two of them to underrate or overrate a player like Tony. This post may make me look silly a month from now if Parker comes back in full force. But taken all together the picture is clear -- Parker's performance is flagging fast. If the Spurs intend to make a serious run at a repeat, they're going to need him to put his game back together.

One final thought. When Parker signed his extension at $14 million dollars a year, the prevailing idea was that San Antonio had snagged a huge bargain. If Parker doesn't shape up, that simply isn't true. Given the glut of incredible point guards in the league, $14 million a year doesn't sound particularly enticing for a barely-above-board point guard. Which, frankly, is how he's playing. In all likelihood, Parker will improve. If not, though, his contract will stand as yet another of the NBA's "great at the time, awful in retrospect" contracts that make many of our snap judgments on contract efficacy so retrospectively silly.