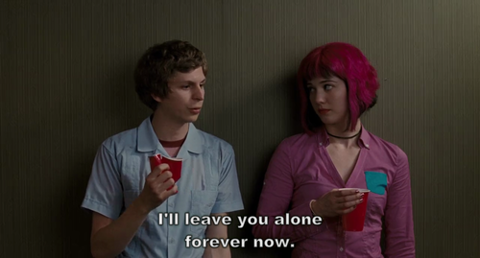 Goodbye, lockout. Go ahead and leave us alone forever now. And go ahead and let the door hit you on the way out. Last night, not 30 minutes after I went to sleep, both sides came to an agreement and signed off on a settlement to end the litigation, complete the lockout, and bring us a season starting on December 25th. Dave Checketts' heart is smiling. Now, us here at the Gothic have been making the best of the lockout (see: our Lockout Coverage tag) and we'd like to think we did a good job of covering it. But let's not beat around the bush. Nobody seriously wants to cover the lockout for a year, and nobody seriously wants to read about the lockout for a year. That would've been awful.

Thank God it's over, and thank God that arena workers can at least get 33 games of guaranteed income starting in 30 days. And that the bars and eateries suffering from the lockout can get the patronage they need starting on Christmas Day, if they can just survive until then. In all the player/owner love, very few people have been mentioning them -- and that's a shame, because it's THESE people that we should be giving our love to right now. They're the ones who have done the majority of the suffering. And they're the ones who I'm most glad will reap the benefits. Regardless. The NBA hasn't released the full deal yet, but by tilling through a variety of sources, we can pull together just enough information to start commenting on the deal in hand. Once we get a full reveal of the new CBA, I'll do a long analysis of that working off my last analysis. But until then? Scraps will do. Click the jump as I examine these scraps and muse on their importance.

First, some nuggets from Chris Sheridan.

Well, that's a good thing. The band as it was previously designed made it virtually impossible for the players to drop below 49.7 or go above 50.3. So, a more honest BRI band that actually gives the players a fighting chance at 51 is a good "hey, we were offering you crap before, let's make that less awful" concession.

Owners dropped their insistence on what would have been known as the Carmelo Anthony rule, preventing teams from executing extend-and-trade deals similar to the one that sent Anthony from the Denver Nuggets to the New York Knicks last season.

It will forever mystify me that this became a big deal. The owners had already enacted a 3 year delay rule that ensured this wouldn't come into play until halfway into the new CBA. Sure, it's an annoying little rule, but it comes into play barely at all. Not nearly enough for either side to attach that much value to it. This should ensure that future players get the same levity afforded Melo, LeBron, and Bosh when they signed their extend-and-trades. Rather straightforward, and one of the few things here that is specifically written with top tier free agents in mind.

A new $2.5 million exception will be available to teams that go below the salary cap, then use all of their cap room to sign free agents. Once they are back above the cap, they will be able to use the new exception instead of being limited to filling out their rosters with players on minimum contracts.

Assuming we're taking the previously discussed CBA as a baseline, this was part of that CBA and will most likely be set up the same way. I won't rehash why it's a good thing here -- just see my bit in my CBA analysis on exceptions and take a gander at everything I said about the "room" midlevel. Then apply it to this. Good for the players that they kept this.

The rookie salary scale and veteran minimum salaries will stay the same as they were last season. Owners had been seeking 12 percent cuts.

I honestly have no idea how this is going to work. The cuts weren't strictly cuts, they were simply re-scaling those respective salary scales to fit the decrease in player BRI. I suppose if they aren't doing this, they'll simply not state the amount to which they're re-scaling all the salary scales. Which, all things considered, might be a good thing. They didn't really need to state it outright, I think we all get that it's happening. Still, this strikes me as a "maybe if we don't state it outright they won't realize that the exact same thing is happening" kind of thing that is at best intellectually dishonest and at worst trickery. Few people are going to call them on it, but this actually does bug me a bit.

Teams above the salary cap will be able to offer four-year mid-level exception contracts to free agents each season. ... from NBA.com: The mid-level exception for non-taxpaying teams will have a maximum length of four years every season (instead of alternating at four years, then three years). Starting salary can be as much as $5 million.

They bent on the number of years, which means less player movement due to contracts running down. If you add in the nuggets we've gotten from NBA.com, a clearer picture emerges -- if I'm reading everything right, they've extended it so that the non-taxpayer MLE doesn't simply apply to under-cap teams, it also applies to teams operating in the sweet spot of right at the cap to the first dollar of tax. Which is, you know, where teams actually want to be. So it's a good compromise in the sense that the previous MLE suggested didn't actually make all that much sense. Combine the higher minimum salary provision with the fact that teams over the cap couldn't use it and you had a recipe for an MLE that would virtually never be able to be used. This way? Will be used about as much as ever. And that's a good thing.

Other compromises were believed to have been reached on the “repeater” luxury tax penalties to be paid by teams exceeding the tax threshold in four of any five seasons. Among the “B-list” issues are the age limit for entry to the draft (possibly upping to 20 years and two years out of high school), drug testing modifications, discipline and D League assignments. Both sides will have a 6 year opt-out.

Oh, christ. I really hope the age limit increase doesn't go through (for reasons I will be writing a column on at some point in the next few weeks), but the drug testing/D-League stuff should be interesting. The repeater stuff still thoroughly befuddles me. It was only going to be in effect for two years in the duration of this CBA, and was nowhere near a finalized thing that couldn't be removed in the next CBA. If the players extract concessions on the repeater tax only to have the league move up the tax's implementation schedule, it won't really do a thing for the players. Still. If it's a concession they want, and it'll get the deal done? I'm glad they got it.

EDIT: New from Zach Lowe after this piece dropped, a lot more information about the MLE compromise. Seriously. There's a lot in there, and I think you should probably just read it. Cliffs notes, though: the new MLE can be used so long as using it doesn't take you $4 million over the tax line, but if it does take you there, you can only use bird rights to get up to that particular line. That is, if you're two million under the tax line, then you use the MLE to sign a $4.5 million player, you'll be $2.5 million over the tax line. That means that any bird right signings you do can only be for $2.5 million dollars a year, maximum. That's a pretty good concession for the players, as that's system-positive for them even relative to the last player-positive CBA. So, good call on Zach for figuring that out and getting his sources straight. A lot easier to see why the players took the token concessions on other issues for a legitimate improvement of the system relative to the last CBA where the midlevel is concerned.

Overall? These are concessions the owners should've offered weeks ago. Don't let the lockout euphoria let you forget that. Just about every one of these concessions is incredibly minor, with the exception of the BRI band. Which isn't even a concession so much as it is making their previously intellectually dishonest BRI split into an actual band. Some of these, like the repeater tax concessions, may end up being a net positive for the owners if the players allow them to move up the implementation schedule, something I see as quite possible. When the final gravestone is laid upon this lockout, it's the owners who should be notably blamed for making this last forever. It's the owners who have the egg on their face for making this last so goddamn long after they'd already extracted ridiculous concessions from the players.

Just remember that. If anyone was flying too close to the sun, it was the owners. You know. If you want to recast Icarus as a greedy monopolist trying to bleed his employees dry. Which would, admittedly, be a really really weird recasting of a Grecian myth. Then again. This lockout WAS really, really weird. So I guess it fits. When we get more information about the new CBA, we'll be sure to get you detailed analysis. Until then? Rejoice, NBA fans. Season starts in less than a month. Get ready for some awesome content from your friends here at the Gothic Ginobili. Because personally? We can't wait.