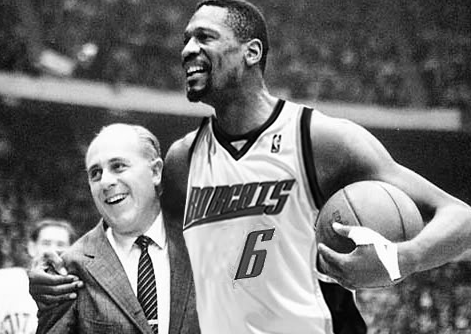 How do you follow a truly dismal team in your favorite sport? Like grieving the dead, everyone handles a 20-win team differently: Some prefer irrational optimism. Others would rather verbally abuse everyone in and around their awful squad, especially the optimistic folks. Others still simply switch teams, because they can't handle watching their favorite franchise mire in the cellar. There's no one right answer. But there are a few ways you can make your life-as-the-cellar fandom a little bit easier. And for today's post, I'm going to share just that. This is my general guide to following a terrible team. Keep in mind that the majority of this post was conceived in 2011 when the Cavs were going through "The Streak." You might not think this applies to you, but remember: For every great team there will always be a terrible team. And to fans of that poor franchise, advice like this will always be timely. And today's two seed might be tomorrow's lottery-bound trogdolytes. You never know, with the NBA. (Unless you're a Laker fan. Then you can stop reading this post.) In any case, I hope it helps. Let's get on with it.

There are two main points to keep in mind, for the general mindset.

Don't watch every single game: The first part is somewhat obvious, but bears repeating -- if your team is slated for a <20 win season, I beg you, don't watch them all. No one will be upset at you. It's an unfortunate situation, and it's fine for you to be reasonable about it. Watch as many as you need to know your guys, sure. But you simply can't watch them all. I watched a handful over 50 games during the Cavs' 2011 season. And I'm a sports blogger who generally watches one or two games a night, or at least tries to on a regular basis. I think if I'd watched any more, I'd probably have lost it and torn my Big Z jersey in half. Honest.

Develop some other rooting interests: Don't be a bandwagoner, obviously, but if I were you, I'd certainly figure out guys on other teams that you have inexplicable ties with or to whom you take a general liking. For me, those highlights were Steve Nash, Andre Iguodala, and Manu Ginobili. Maybe those specific guys will work out for you, maybe they won't. It's not just to tide you over: In fact, my love for my adopted Spurs was generally rooted in my liking for Tim Duncan and David Robinson as Cavs fans suffered the the legendarily awful teams at the turn of the millenium, and now we have a blog named after Manu. Go figure. My point is that you can find things you like watching, if you want to watch ball.

These two points are related: If you subject yourself to 82 games of dreck, you will give up on the game of basketball. You're going to give it up. I mean, it's doubtful even your PLAYERS want to sit there for all 82 games -- you certainly aren't a lesser fan if you don't want to sit through that. If you want to maintain a healthy fandom towards the game (and by extension your own team), you quickly realize that you need to break up the monotony of failure with a healthy dollop of "hey, woah, Steve Nash is having a vintage night! I love Steve Nash! Let's turn the channel and see him do his thing." This transference serves a double purpose. First, it reminds you that someday your franchise will have a highly-regarded draft pick fall into its lap and you'll have your own Steve Nash to prance about. It's also good because it reminds you that life is not terrible and worthless. And that Steve Nash is still alive. That's always fun, you know?

That's not to say you don't ever want to watch your team. When you do watch your own team, however, you need to take a slightly different approach. One thing that always helped me through the doldrums for the Cavs was when I got irrationally optimistic over some of our bit players. On the 2011 Cavs, that was Jamario Moon's big role (and Manny Harris, to some extent). I went into the season thinking Jamario would prove himself to be a starting caliber small forward and average something like 15-5-5 with decent shooting numbers on a fringe playoff team. I was clearly... ahem... wrong about that. But Jamario was still a fun player to root for, night-in and night-out. His defensive effort was always atrocious but he had a playful circus dribble he'd developed as a Globetrotter and his bench reactions to big shots or crazy events were always essential. He was fun to watch, if you squinted and ignored the fact that he was atrociously unfit for the NBA game at this point of his career. There were certainly Cavs games where the only really fun moment was Jamario breaking out some insanely stupid cross dribble that inevitably would result in a turnover but -- despite the constant failure -- looked fun and entertained me. There have to be players like that, even if you partially find them fun because you revel in how awful they are (like, say, Gana Diop or Sasha Pavlovic).

I like to think of rooting for a bad team as being on a swing set. You know the type. Remember when you were in elementary school, and you'd always want to get on the swing set at lunch? One of your friends would push you as you feebly kicked your feet for momentum, and you'd go wildly back and forth until you got dizzy and wanted to get the hell off. That's how you can expect your emotions to oscillate during the lean years. You'll have games that make you think "oh, wow, Manny Harris is sure gonna be a starting caliber NBA shooting guard someday" or "wow, we're one piece and a little bit of coaching away from being a passable excuse for an NBA team!" You'll almost immediately thereafter suffer games that make you wonder whether your team has ever seen a basketball before, and games where you wonder if your team would be improved if it acquired Matlock in free agency as the point guard of the future. I'd say "try to keep these oscillations to a minimum", but that's honestly a bunch of bull. You can't. Try as you might, you are going to think all these things, if only fleetingly, and they will alternatingly please and haunt you. It's your lot as a fan of a bad team. A good approach to take is: "We're not as good as we look; we're not as bad as we look." Unfortunately, the truth lies somewhere that you, as a fan, will never be able to access it. Sorry about that, and enjoy what you can. 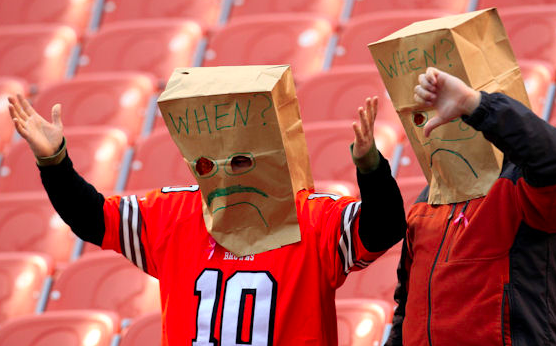 Having gone over the general state of mind of the depressed fan, let's run through some positives. There are a few.

Few actually consider these benefits when they complain about rooting for a bad team. And there's a good reason for that. They're kind of inconsequential. Sure, you can luck into some really amazing benefits -- teams tend to reward loyalty during the doldrums, so if you actually maintain season tickets during a down period, you're quite likely going to end up with upgraded seats next time the team is good. And the amount of credibility you get with other fans for sticking with your bad team is nice. But the fact that you lose all ability to trash talk kind of sucks. The fact that most of these become null and void if you don't live in the same area as your team anymore. The fact that nobody but the fellow fans can really get what you're going through on a fan-based level -- the memories of a sports fan are rather fickle, and while I certainly remember my time watching a hopeless cellar dweller, my empathy is limited because for the most part I simply block out the terrible year and focus only on the hope for the future.

Which, in the end, brings us back to the single biggest thing to keep in mind when following a dismal team. It will end. Give a team enough high lottery picks, and it may seem like hundreds of years away, but your team will eventually be competing for a playoff spot again. We can debate all day exactly how much better that is than being a truly terrible all-time bad team. But anyone who's rooted for a "worst team of all time" candidate knows the truth. It's better. And everyone who's rooted for one of those teams -- excepting, of course, this year's Bobcats (yet) -- knows that it gets better. Your team will not be terrible forever. You will not be hopeless forever. And eventually, you'll see people tweeting about the next awful team and -- instead of writing those tweets yourself -- you'll knowingly nod, retweet it with a nod to your past, and ignore it. Because you'll be in the future, your team will be good, and you'll be far too busy playing 3D Chess with Q to really focus on the plight of Twitter's Cardboard Sarver.

Now, all that said, let's return to the present and join hands in a prayer for Cardboard Gerald.