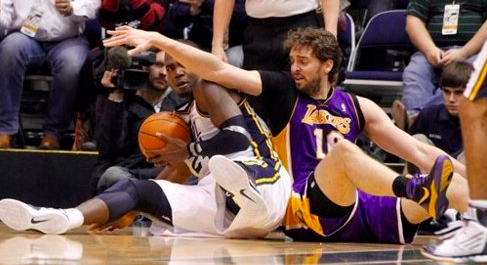 Hey, everybody! This is the third edition of the STEVE NASH Power Rankings. The object of these Power Rankings is rather simple -- STEVE NASH is my statistical model for making team projections the season, and STEVE gave us some results about teams' SRS projections before the season. So -- during the season -- we've been updating these SRS predictions to reflect the week's results. Our new results are a rather simple re-weighting of STEVE's projections and the actual results of the season. These new results are then run through a Gibbs sampler to predict playoff probabilities, projected records, and other various stats. I apply the mean-regressed HCA estimates from Evan of The City to these new projections to calculate predicted home wins and road wins remaining in the season and add them to the team's current record. Keep in mind (once again) these are completely and utterly automated -- there's no human input on these rankings, at all. So don't lynch me, Wizards fans. Without further ado, here are the rankings as of the close of all games played on January 10th.

A few observations, as I continue to create a proper format for these ranking posts.

THREE UP, THREE DOWN

In the spirit of fixing errors, I realized this week that the weighting mechanism I was using was maintaining week 1 reweights on our week 2 ratings. As a result, a few teams got the short stick in last week's writeup -- for instance Portland was in 5th when the model actually had them in 2nd in the West (hence their fall this week). In a related story, when calculating playoff percentages, the model was assuming there were only 7 spots per conference, not 8. I've updated the probabilities in each week, which doesn't really change the broad narratives I talked about, but does change some of the numbers. I'll try to go back and edit it at some point. Apologies for that error.

I would comment on interesting trends, but there aren't too many of them. The Spurs have been awful enough on the road that the model now predicts they'll end with a final road record of 16-17 -- which, given that they're oh for five so far, may seem like an almost charitable assessment. We see a pretty clear separation between the contenders and the pretenders in the East, with the Heat/Bulls/Sixers troika all ending up around 45 wins (which translates to around 56-57 wins in a full season). The Thunder are lapping the competition, record-wise, in the West -- their two biggest competitors (Spurs and Nuggets) both have had underwhelming low points to their starts, and it's tough to see either seriously challenging the Thunder when all's said and done. I thought, before the season, that the Thunder had about a 50% chance of winning the West. NASH has finally come to an agreement with me, it appears.

And in our weekly note on the matter -- NASH sees the season turning out, despite all the hype the East had entering this season, exactly like recent years in terms of how the lower-tier playoff teams look. The West has no less than three teams who project to miss the playoffs in the West despite better records than the Eastern 8 seed. The East has two playoff teams under 0.500 and the three worst teams in the league. For all the talk about the East coming back? Certainly doesn't look it.

I'd like to say more, but man, am I tired. I'm going to watch a few games and go to sleep. Night, world.