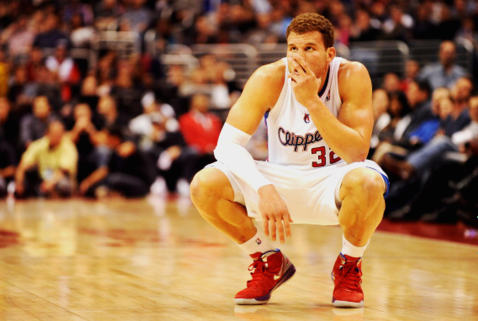 Hey, everybody! This is the fourth edition of the STEVE NASH Power Rankings. The object of these Power Rankings is rather simple -- STEVE NASH is my statistical model for making team projections the season, and STEVE gave us some results about teams' SRS projections before the season. So -- during the season -- we've been updating these SRS predictions to reflect the week's results. Our new results are a rather simple re-weighting of STEVE's projections and the actual results of the season. These new results are then run through a Gibbs sampler to predict playoff probabilities, projected records, and other various stats. I apply the mean-regressed HCA estimates from Evan of The City to these new projections to calculate predicted home wins and road wins remaining in the season and add them to the team's current record. Keep in mind (once again) these are completely and utterly automated -- there's no human input on these rankings, at all. So don't lynch me, Wizards fans. Without further ado, here are the rankings as of the close of all games played on January 25th.

Instead of our customary thoughts, here's a chart, and some other related words. 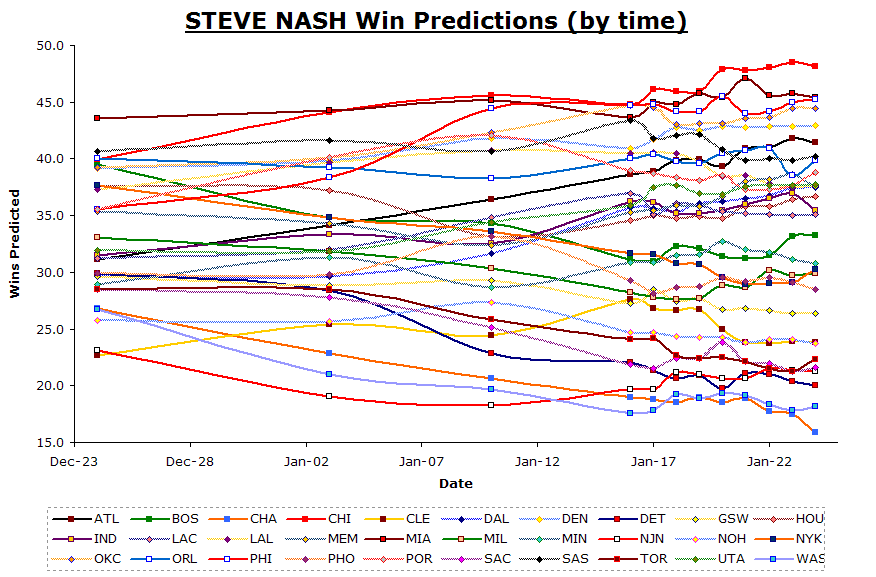 If you look at this and wonder what it means, well, good on you, because that's a good question. Essentially, from here on out, I'll be collecting data daily and running NASH updates on my computer. With this will come updated playoff percentages, estimated win totals, et cetera. The end goal (one that we aren't quite near, yet, but will be at eventually) is to automate the process and give you -- our readers -- an interactive graphic that allows you to see the NASH projected wins at any date of the season (as you can see, I haven't back-filled in the data for the first three weeks of the season -- I may not be able to do so easily, so I might punt on that). This is about as readable as I can make the chart going from excel directly. A few notes on format -- Western conference teams get a diamond as their bullet, Eastern teams get a square. Western teams get a dashed line, Eastern teams get a solid.

So, yeah. End state architecture here (can you tell I've been putting in long hours at work?) would be a chart that lets you track either playoff percentages, projected wins, or projected end-season SRS in a convenient, easy-to-navigate interface -- allows user gaming, sorting, team-by-team views, et cetera. I'm still searching for an online interfaced stats package that gives me the flexibility I need to put this up. Current idea is to use SciViews-R and try my luck at that, but lord knows if I can really get that to do what I want. My hope is that something perfect will reveal itself to me soon, and I'll be able to use that. Worst case scenario, I probably drop a fully updated framework for presenting the NASH model output during the all-star break. Best case, probably in the next two weeks. Get excited! Maybe! If you like this sort of thing! But regardless. There aren't many takeaways from this past week, but I can point to a few interesting tidbits.

The Southwest Division -- excepting the Spurs and Hornets -- is collectively on a ridiculous streak right now. The Mavs went from a 58.8% chance at making the playoffs one week ago to a 73.5% chance now. The Grizzlies went from 56.5% to 77.7%. The Rockets went from 51% to 66% -- and collectively, they've gone from a predicted 106 wins over the season to 112. A pretty huge swing. The West is looking about as wide open as it did last week, and it's become a real possibility that the winner of the Pacific Division won't actually get homecourt in a 4-5 matchup -- currently, the Lakers project out as the 4th seed in the West despite having the 6th best record. (And, yes, the Clippers project to miss the playoffs -- partly an artifact of their soft schedule, partly an artifact of the massive amount of games they have left to play -- as we enter play tonight, the Clippers and Jazz have played markedly fewer games than the average NBA team. This will obviously round itself out as the season comes to a close, but something to think about when considering the decreased rest time and the fact that the Clippers have already had some trouble with injuries.

As for personal thoughts, I can't really fault any of NASH's current predictions, though I think the Spurs may continue their slow descent from their peak back in preseason at #1 in the West. They're currently at #3, but it's not exactly #3 with a bullet (i.e., a solid third) -- only two wins separate them from the 8 seed, and only three wins separate them from being out of the playoffs entirely. The Spurs have played well, so far, and the model is adjusting for their currently putrid road record. Which has taken them down a tad from the last few weeks. Regardless, though, with Manu gone and one of the most hellish stretches of games the Spurs have seen in years coming up, I see them underperforming these projections by a win or two -- enough to be the difference, this season, from a 2-3 seed and a 7-8 seed. It's going to be a crazy playoffs, guys. For real.

I'd write more, but I need to get to sleep because I had dental surgery today and I have a splitting headache. Join us tomorrow for my western all-stars, and Friday for a freeform post starring... well, not really sure yet, but it's going to be pretty awesome (whatever it is). Sorry for the short post. Hope you're having a great week, y'all. 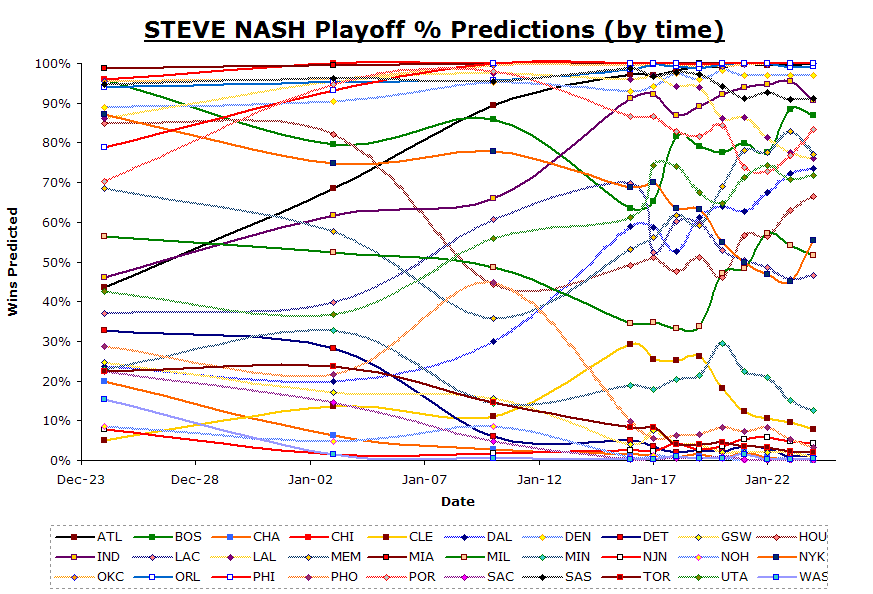