Hey, everybody! This is the fifth edition of the STEVE NASH Power Rankings. The object of these Power Rankings is rather simple -- STEVE NASH is my statistical model for making team projections the season, and STEVE gave us some results about teams' SRS projections before the season. So -- during the season -- we've been updating these SRS predictions to reflect the week's results. Our new results are a rather simple re-weighting of STEVE's projections and the actual results of the season. These new results are then run through a Gibbs sampler to predict playoff probabilities, projected records, and other various stats. I apply the mean-regressed HCA estimates from Evan of The City to these new projections to calculate predicted home wins and road wins remaining in the season and add them to the team's current record. Keep in mind (once again) these are completely and utterly automated -- there's no human input on these rankings, at all. So don't lynch me, Bobcats fans. Without further ado, here are the rankings as of the close of all games played on January 25th.

Today, we're going to go over how the Eastern Conference picture has changed (in the view of NASH) since the start of the season, using sets of three. Next week? We'll cover the West. Today is the East's time to shine, though. If... if "shine" is really a word that can describe this Eastern Conference. (Spoiler alert. It isn't.) 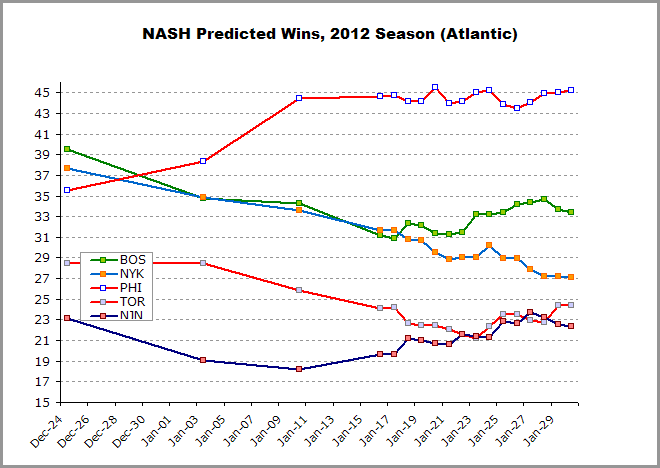 The main story in the Atlantic, to this point, is simply how indefensibly uncontested the Atlantic has been. Preseason, virtually everyone was talking about how this was going to be an interesting divisional title race between the Celtics and the Knicks, with the Sixers as a possible intriguing wildcard. Instead? The Sixers have been the only decent team in the division, and unlike the Northwest Division (the only division in the league that currently projects to have every single team over 0.500), the Atlantic may very well end up with only one over 0.500. While the Sixers have stayed relatively consistently around 44-46 wins since their rise peaked around January 10th, the Celtics and Knicks have hemorrhaged terribly since the season's start, and at this point, the Celtics project out as a barely 0.500 team and the Knicks project even worse. A sad projection for a division that looked to be full of interesting teams at season's start. 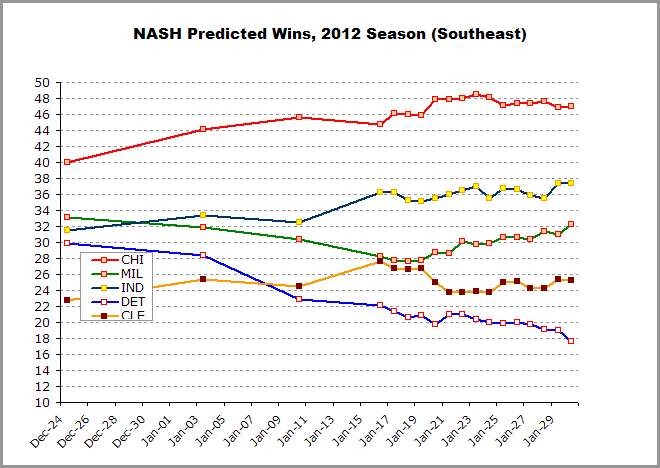 Chicago is great, Indiana is good, the Cavs are recouping, and the Pistons are straight up atrocious. These are all facts. A lot of us were very high on this Pistons team, even thinking they had an outside chance to break .500 behind a Greg Monroe breakout season. We were half right, let's put it that way. On the other end of things, the Bulls' prospects are very good. Bullish, even. A tight loss to Miami showcased how far along Derrick Rose really is, and if you haven't seen him lately, well, it's a treat, and the Bulls' endless train of stat-stuffing bigs is always an defense aficionado's delight. And of course we have the Cavs, in a season that could alternately be termed a slide and a fantastic over-achievement in the same sentence. Kyrie Irving (instant offense, ROY favorite) has been mindblowingly good and Anderson Varejao has shown himself as simultaneously one of the fastest centers in the league, one of the best defensive bigs in the league, and perhaps the single best offensive rebounder in the league (or he's right behind K-Love). The Cavs might sneak into the playoffs. With the Bogut injury, I think the Cavs are the prohibitive 9th seed at least. Right now NASH has them at 10th.

Here's where STEVE NASH breaks down a little from insufficient data: The Bucks are on a two-game winning tear (including a remarkably scrappy dismantling of the Lakers) but losing Andrew Bogut never helped anyone. One expects their 51.7% chance of making the playoffs to drop dramatically. Losing George Hill never helped anyone either, as the Pacers don't need to be told -- Alex and I are both Spurs fans who have been sort of watching the Pacers for George's greatness alone, and his ankle fracture makes this a really sad day. Still, the Pacers have plenty of depth and the Bucks don't look catastrophically bad even without a true C. 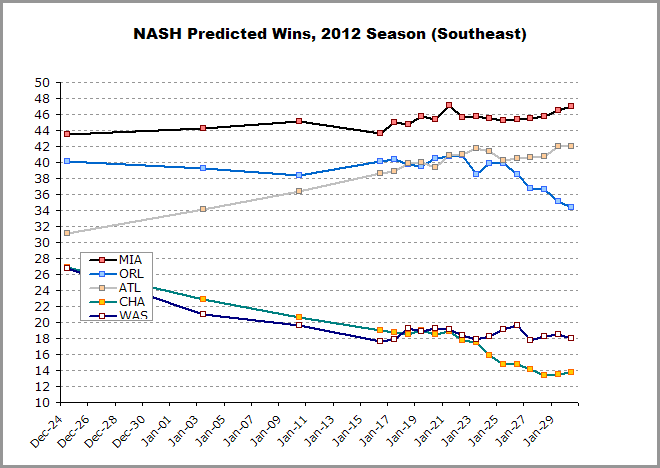 As for Orlando? Well, they got bitten by the newly-christened Lowe curse. You see, on January 23rd, Zach Lowe pronounced the Magic the strongest fringe title contender in the league. At the time, NASH projected the Magic for 41 wins. Since then? They lost to Boston by 31 points on the night of his pronouncement, crushed the Pacers, and proceeded to hemorrhage in the NASH standings ever since on a 1-5 slide. They've gone from 41 predicted wins 9 days ago to just 34 wins today -- the equivalent of going from a projected 50 win team to a projected 43 win team. Their playoff percentage is still high, but as of today, they're projected to end up with the 17th best record in the NBA, a negative SRS, and a snowball's chance in hell of anything good happening. I don't really know what happened. I don't think anyone does. But really, if Zach Lowe finds himself forever banned from the Amway center, I'm not gonna be shocked.

So overall, the East looks kind of pitiful, but there are also some pretty good teams in there. The Atlantic Division is hilariously bad, the Central projects to be about average, and the Southeast is so polarized that Orlando was up 27 in a game, en route to HCA in the first round before taking a six-minute rotation off and suddenly finding themselves in the second circle of Hell, populated only by Bobcats, destined for an 8 seed or the lower tiers of the lottery.