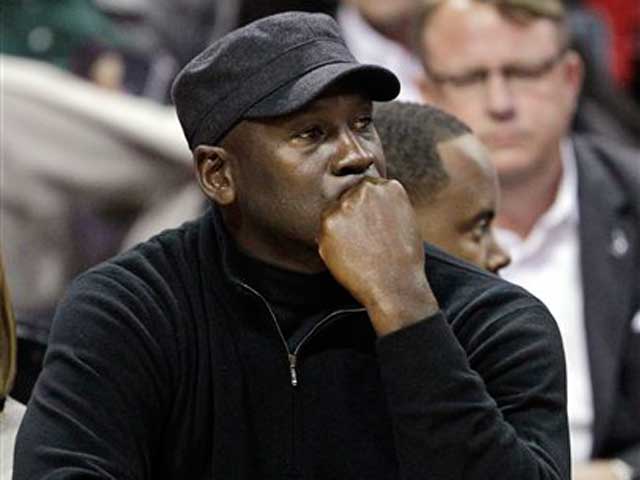 Everyone give a warm welcome to Jake Harmon, one of our two newest contributors. Jake will be contributing odd fictional tales and reflections of an NBA fan living in the depths of the United States, also known as Alabama. It's tough out there for an NBA fan. He's a political science major who'd much rather major in "deep thoughts about basketball." We enjoy those thoughts, so we'll endeavor to give him the platform to do that. Have at his first piece, an excellent muse on a dreamlike Bobcats game, and the last part in our trilogy of independently written Jordan posts that were -- somehow -- happened to all be connected anyway.

Sometimes I fall asleep at night, and I dream about watching a Bobcats game. And they're just getting blown out, the camera cutting around looking for the perpetually visibly frustrated Jordan. The camera finds him and fixates on him, and he just looks livid, wringing his hands, tongue out a little bit, eyes intent. The Bobcats turn the ball over and get dunked on again. The crowd is silent, the only noise in the stadium the low murmur of disinterested small talk between the odd fans scattered around the arena's stands and the squeaking shoes, the pounding of leather on the hardwood. There's no talk between the beaten Bobcats, they shuffle up and down the court seeming mentally checked out. Going through the motions. Another botched possession, fastbreak, dunk. Bobcats down 30 in the third. And just then, Jordan knows he can't take it. The camera maintains its focus on him, seemingly for an inordinate amount of time. As though the cameraman senses the man in the stands will be more significant to this game's outcome than anything currently taking place on the floor. As I sit and become transfixed by the prolonged shot, that surreal mixture of timing, imagery, and silence, something magnificent happens. And somehow, much like the cameraman, I watch it unfold and question if I ever really thought it wouldn't happen. Jordan is overwhelmed, he stands up from his seat; not in anger or exasperation, but with an intense focus and steely gaze that, while different cast upon his now aged visage, seems somehow intrinsically right. As true and compelling as phases of the moon, not a mask of indifference but a revelation of passion that millions and millions of people around the world forever have burned into their memory.

He moves sleekly across the stands to the stairway, somehow more graceful than I expect him to be. More graceful than I remember him looking in a long time, but it's unmistakably him, toes straight, shoulders squared and forward, head at a slight tilt but eyes as straight and sure ahead as a cresting ship breaking the waves of a tide that cannot stop its advance. He reaches the bottom of the stairway to the court's edge, and accelerates slightly, a slow jog towards the bench, arms bent 90 degrees, swaying back and forth rhythmically as though on an elliptical, that undeniably perfect form and grace visible on this aged body, seeming both entirely alien and entirely appropriate to my dreaming eyes. As though the rust has been shaken off, some sort of inevitably temporary weight has been removed, and the man is who he must have always been. And as he approaches the bench, gliding slowly to a stop beside the coach, he leans in, eyes narrow and fiery, barking something quietly. The coach nods, gestures. Time-out. The listless bobcats players take their time collecting on the sideline, but only momentarily. Jordan doesn't seem to regard their approach, as he accelerates and glides away and down the tunnel towards the locker room. The coach and the players discuss something, there's a still in the huddle. Not the still that has become routine here in Time Warner Cable arena, one of broken hopes and spirits, of meandering thoughts seeking stimulation before the inevitable time that the uniforms can be removed and they can go home, disappear into their private lives. Deny the world the chance to take any more away from them than what is already being taken night after night on that court.

No, this still is different. It's not excitement, so much as it is looks of confusion, some perhaps of alarm. But not disconnected, all engaged. And then it happens, as the timeout is nearly at its end. It's as though all the energy is somehow sucked out of the room. He emerges from the tunnel. Older, face more haggard and wrinkled than I remember it, even having seen it only moments prior. But it doesn't matter. It's in his eyes, the way he moves, so effortlessly despite his age and increased frame. He is not conditioned, yet somehow moves as though there is no one more athletic on the planet. His arms swaying in that rhythmic motion, head at a slight tilt, eyes ahead, jaw edging from side to side, a piece of gum narrowly visible through his pursed lips as he chews. And on his body a Bobcats uniform. Michael Jordan enters the space, gliding forward. All grace and physical power. And the arena is silent. Not the dull murmur of disinterested crowds, or jeers of bandwagon fans of the away team. Absolute, utter silence. And then, as Jordan slows to a stop next to his teammates, everything explodes. How could it not? It's thunderous, all-encompassing. Somehow the stands are no longer half-empty, a smattering of fans. Every seat is filled, the lights seem somehow brighter, everything has changed and it is imminently, immediately, different. Thousands and thousands of fans, every seat in the house packed, every man woman and child off their seats screaming in enthusiasm, excitement, and wonder. The Bobcats players' alarm and confusion replaced by what can only be described as awe. They seem bigger somehow, their backs straighter, their chins higher, their faces energized and filled with emotion. In a moment, everything has changed. It's 1989 in 2012, where the lights cannot shine any brighter, the people cannot possibly scream any louder, and the inevitability of Michael Jordan taking over this game, his eyes filled with that familiar fire, his body moving with all the litheness and strength that it ever had, only the wrinkles around his eyes and mouth belying the truth in my haze. The timeout ends, Michael Jordan takes the floor and catches the inbound pass, and the din of the crowd in that arena becomes so deafening and so powerful I'm forced out of reverie. Back to reality, where I sit and watch this same familiar scene.

Watching a Bobcats game. And they're just getting blown out, the camera cutting around looking for the perpetually visibly frustrated Jordan. The camera finds him and fixates on him, and he just looks livid, wringing his hands, tongue out a little bit, eyes intent. The Bobcats turn the ball over and get dunked on again. The crowd is silent, the only noise in the stadium the low murmur of disinterested small talk between the odd fans scattered around the arena's stands and the squeaking shoes, the pounding of leather on the hardwood. There's no talk between the beaten Bobcats, they shuffle up and down the court seeming mentally checked out. Going through the motions. Another botched possession, fastbreak, dunk. Bobcats down 30 in the third.

And even though I know how this will end, I still want to believe. I see it so clearly.