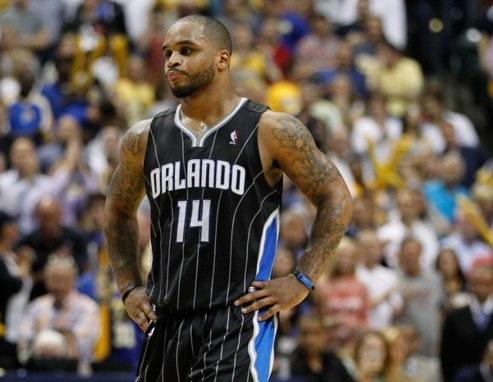 For a more specific look at the surprising Spurs, see today's post at 48 Minutes of Hell.

It was recently brought to my attention that most people aren't quite as ridiculous as I. Let me explain. For much of the season, I've been offhandedly keeping tabs on the overall trends from an offense/defense perspective, through the view of eight-game moving averages, rankings in five-game spans, and a large spreadsheet updated when-I-remember with the latest summary data from Hoopdata. I was asked by my friend -- Tim Varner of 48 Minutes of Hell -- if I'd put together a complete post on the surprising late-season defensive renaissance by the San Antonio Spurs. Compiling my data into an easy-to-share form for the purposes of the post in question led my data to a form where it would be easy to share the whole league picture. Hence, I decided to make a post here about it as well, specifically taking aim at interesting trends (at the most rudimentary, league-wide level) over the last 21 games of the year and sharing the underlying data behind the graphs at 48 Minutes of Hell and the entire ranking. Onward, then. 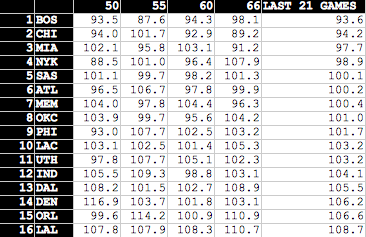 This table reports the average of each team's defensive efficiency in 5-6 game stretches, labeled in the top row by the last game in the stretch. The final total is their overall average defensive efficiency in the last 21 games of the 2012 season, which makes up roughly a third of our compressed season. There are a few main takeaways from this data, on the rawest level. 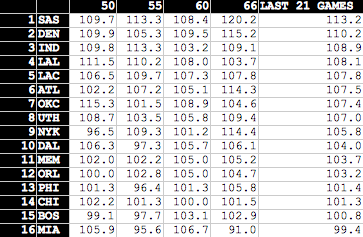 Second verse, same as the first. Five game offensive efficiency averages, then an overall average over a team's last 21. Three observations, as before: 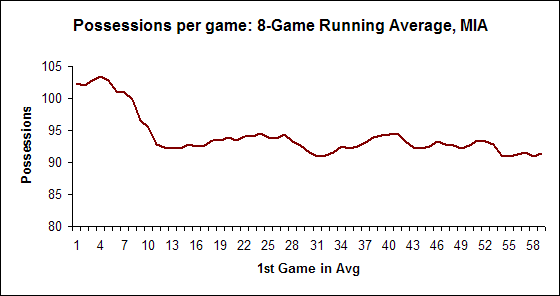 Reader @DerekJamesNBA sent us a tweet noting that it seemed odd to him that Miami has slowed down so much in the playoffs. I replied that it wasn't all that surprising to me, then decided I'd back that up with numbers. To wit, look at the above chart. That chart represents an eight-game running average of possessions per game played by the Miami Heat. You may notice a trend. Up until around game 22 of the season, the Heat were playing at a breakneck pace, akin more to the SSOL Suns than a usual Riley team. Then, out of nowhere? Their possessions per game average collapsed unto itself, and they spent the entire rest of the season playing at a pace that (over a full season) would've made them one of the 5 slowest teams in the league (and the slowest in the playoffs). It's a bit hard to tell, but they actually got marginally slower over the last half of the season. The average pace of their first round series has been tedious and slow, but there's no real surprise there -- this is how they've been playing since their blitzkrieg start. Perhaps they've done it to save LeBron's legs, perhaps they've done it to focus more on their halfcourt game. Either way, the Heat's style barely resembles the team that destroyed the league in the first 20 games, and that's been true for more of the season than you'd think.

To do your own analyses, I've put together a Google Doc that collects the per-game offensive and defensive efficiencies of every given team -- in other words, the raw data behind the rankings, in an easier-to-parse form than the overall totals on HoopData. Using this, you can put together charts for your own team of choice if you'd like to examine a specific team's evolving defense or offensive evolution as the series went on. Once I figure out how to use Tableau, I might add a few more visualizations to this post -- until then, hope the overall picture is sufficient for most of our readers. If you have any questions,