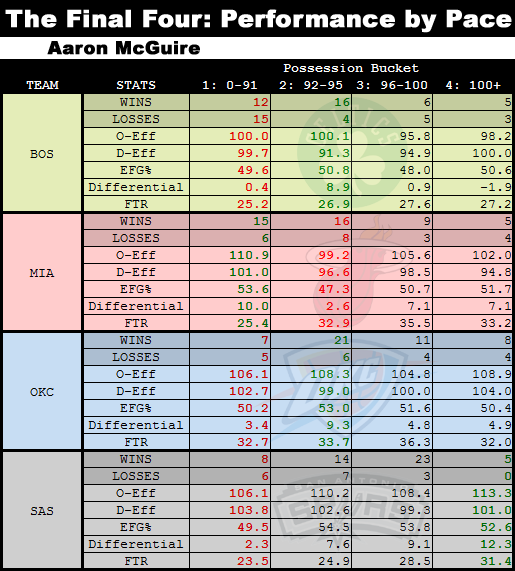 This is part of a two-part series. For observations on the Spurs and the Thunder's specific matchup, see 48 Minutes of Hell.

As one of my questions in Monday's Statistical Q&A, I fielded a question from the imitable Tim Varner of 48 Minutes of Hell. His query was whether the Spurs stand to gain in OKC smallball lineups by pushing the pace and playing fast. In short? Yes. I covered that today in detail at 48 Minutes of Hell, but there's a lot of interesting tidbits to be had in this table, enough so that I felt a separate post was necessary analyzing the trends and tendencies of the non-Spurs teams. To examine, I've produced this table that shows the W/L record, the offensive and defensive efficiencies, the eFG%, the efficiency differential, and the free throw rates of our four remaining teams in four distinct buckets of possessions. First bucket includes all games with under 91 possessions; the second includes 91-95; the third is 95-100; and the fourth and final bucket includes super-fast games with over 100 possessions. These are roughly quartiles of possessions. I placed in red a team's "worst" pace and in green a team's best.

Looking at this table, some interesting takeaways after the jump.

Long story short, I just mathematically proved why I don't want to watch the Heat-Celtics series! Therefore, I'm going to sleep through it. You know how I do. If that offends you as a reader, then I suggest that you link to YOUR mathematical proof in the comments. I promise I will read it and review it, and perhaps rethink my stance.