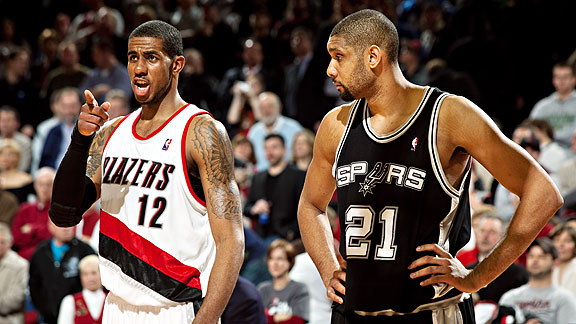 For the last two seasons, watching LaMarcus Aldridge go to work offensively has been an absolute joy. Aldridge owns one of the most unstoppable pet post moves in the league, and represents one of the few joys that classical post aficionados can get from the modern NBA. He does this exceedingly graceful hard right shoulder fake followed by a soft jump hook. If the defender doesn't overplay it, of course -- if they do, he simply shakes them off and explodes to the rim for a dunk. Sounds a touch unimpressive, perhaps, but it's remarkably effective -- Aldridge converted on an absurd 63% of his hook shots last year. Extremely high. It isn't quite Kareem's skyhook, but it's still almost impossible to stop. He folds that in with an excellent long range game -- albeit absent threes -- that takes his defender out of the post and some of the best free throw shooting from his position (81% from the line, on an above-average FTA/FGA to boot). To a man who likes watching big men work for their own offense, Aldridge is sublime -- he hearkens back to the days of McHale and Olajuwon, with a touch of a modern flair.

As for his defense, it's just about as impressive -- he's never going to be confused for Kevin Garnett, but he's been consistently excellent on that end for Portland He's better at covering the pick and roll than almost anyone in the league (excepting, of course, Garnett and Taj Gibson) and he's a solid defender in the low post. His length makes him a decent spot-up cover when he's engaged, although at times last season he looked a touch lost when he had to float on his man outside the paint. I'd attribute that to the general miasma around last year's Blazers before I really impugn Aldridge, though -- he's been an excellent defensive player for years and one of the top defenders at his position since 2010. His only real flaw, defensively, is his relatively disappointing rebounding -- Aldridge is per-possession one of the worst rebounders among any star big man, and he's never going to average the eye-popping rebounding totals that a Kevin Love or a Blake Griffin type player puts up. That's not necessarily to say he doesn't help the Blazers on that end -- the Blazers have traditionally rebounded better as a unit with Aldridge on the floor, and part of that is for the same reason Epke Udoh improves a team's rebounding despite anemic personal rebounding numbers -- he often blocks out the other team's best rebounder, and he's rather adept at tipping out boards to the Portland guards.

Here's the thing. On offense, you have a superstar player who produces blisteringly efficient offense on a silky-smooth classical style unlike anyone else in the league today. On defense, you have a stick of pick-and-roll dynamite whose slim frame is misleading to his actual defensive value, and whose defense is far and away the best out of all the rising star power forwards in the league. His contract is a laugher, paying him around $13 million annually for one of the few legitimate superstar players in the league. He's humble. He's smart. He's got a compelling personal story and a lovely family. He supports his teammates, loves Andre Miller, and stays generally absurdly healthy despite playing in one of the most health-luckless franchises in the league. Without adding a three to his game, it's almost beyond the realm of possibility for Aldridge to be more efficient or multifaceted offensively. Without a front office that can surround him with talent that at least approaches replacement-level, it's essentially beyond the realm of possibility for Aldridge to single-handedly lead a defunct roster to contention in a brutal conference.

I put the question to you. What more does he need to do to be appreciated? 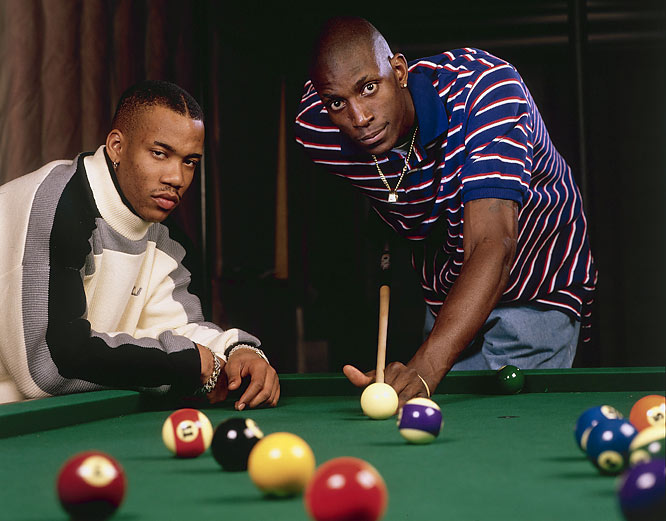 Kevin Garnett's something of an old hand in the NBA. The grizzled, worn veteran who's been through bar fights and wars and the proverbial wringer. It manifests partly in his comically over-the-top persona, where he inexplicably cusses out rookies and makes fun of hairless jerks. It also manifests in his ubiquity -- Garnett isn't just an old hand in terms of his play and demeanor, he's an old hand in terms of his experience and knowledge. Nothing is going to take from Garnett the fact that he's the highest salaried player in the history of the league -- given the salary cap, he's likely to remain the highest inflation-adjusted paid NBA player in the history of the sport for the sport's existence. And having spent years toiling away on dismal Minnesota teams, he provides a unique perspective for stars in LeBron's position a la 2010, or Love's position a la now.

People forget about it, but through the rough exterior and absurd persona, Garnett is actually a pretty intelligent guy. He's compassionate, and in his slavish devotion to this general act of cruelty and indifference to end his career, he's managed to make almost everyone forget about how he was before he went to Boston and won his ring. Because he was different. He was the kid. He was an NBA shout-out to the legend of Sisyphus, toiling under the weight of an overwhelmingly poor roster and a constant barrage of double-teams. Sisyphus was forced to roll an immense boulder up a hill, only to watch it roll back down as soon as he got to the top. For eternity. Given this context, his persona had a markedly different flavor back in Minneapolis -- before he actually won, it just manifested as an earnest reflection of a man who wanted to win but couldn't. The stresses and hopes of an impossibly incompetent franchise and a depressingly downtrodden fanbase took a toll on the man, and the toll was commensurate with the intensity of the feelings. Perhaps he went over the line occasionally, perhaps he didn't really think about what he was doing. But there was never the appearance of spite. Just a man shut down by circumstances relatively beyond his control. Then he went to Boston and became intolerable. Because he was actually winning and still acting the exact same way.

But that's beside the point, kind of.

Garnett is misunderstood, in a general sense. He made his money, which is fine, and he made his choices -- it wasn't predestined that he stay with the Wolves, and to some extent, the writing was on the wall relatively early. But it's also hard to look at it in hindsight and get a good sense of what Garnett was thinking at the time. And it's hard to really look at his career and think "oh, well, this guy was properly appreciated!" It's difficult to watch his defensive dominance in his mid 30s and say "dang, he really didn't have a supporting cast in Minnesota, did he?" It's not easy to examine Garnett and come to any other conclusion than that of a lost career -- a player whose statistical production is peerless and whose visual impact seems greater still, yet a player whose best years were his waning ones and whose statistically dominant years were almost completely squandered. And a player who was never really appreciated for the sheer depth of his production, or the way he made his team so much better. His array of post-moves -- enfeebled now, with wizening skin and creaky bones -- were dominant in his prime. His defense was dominant too. But basketball isn't simply a game of who's-the-better-player. Even if we like to respect players on good teams as though they're playing one-on-five. The zeitgeist has never quite caught on to the idea of properly appreciating a player whose team forces them to actually play one-on-five. Not quite there yet, I'm afraid.

LaMarcus Aldridge gets no respect, and it kills me.

Think of it this way -- I don't love Kevin Garnett. I've always been a Duncan guy, even back in the day. Something about Garnett's numbers never quite sat right with me. But that's besides the point. I can't in good faith deny the truth. For 10 years, Garnett's statistical production the 1b to Duncan's 1a. And they alternated, year-in and year-out. The difference wasn't some internal tough-juice concoction hearkening back to Jordan from Space Jam. It wasn't some mental wrinkle Duncan had that Garnett never did. It wasn't the style of the jersey, the shear of their hair, the cut of their jib. It was the names that flanked them. It was comparing Manu Ginobili and Tony Parker with Wally Sczerbiak and Stephon Marbury. It was comparing Gregg Popovich with Flip Saunders. It was comparing R.C. Buford with Kevin McHale. Duncan is phenomenal. He's great. Garnett was too, though, and simply defaulting to the idea that he "figured it out" when he got to Boston is analytically lazy and incoherent-at-best.

As for today? In-the-now? I'm a bit afraid that the exact same in-the-moment forgetfulness plagues our analysis and our general appreciation for yet another star-crossed terrible team. Chris Bosh is a good player. Blake Griffin is a good player. This late-career rendition of Dirk Nowitzki is a good player. Today, LaMarcus Aldridge is better than all of them. He's an infinitely more multifacted offensive player than either Griffin or Bosh, with defense that takes either to town in a moment flat. He has more post moves than any active young star in the league, and his absurd versatility makes him good enough to act as a go-to option on all but 4 or 5 teams in the league. He's not the offensive player Dirk is, even at Dirk's age, but his intense defense fords the gap and then some. Aldridge is not Kevin Love, no -- his range isn't quite as far out, and his rebounding will continue to dock a few points. But even with me being one of the few who thinks Love's defense is underrated, Aldridge is a far superior defender, and that counts for a lot as a big man in this league. If you put Aldridge next to Pekovic, you really have to ponder what wonders that defense would produce. It's an open question, and it's a good one.

In the end, the key differentiator between Aldridge and the others has nothing to do with how they play or how they rate out on an individual basis. Aldridge is worse simply because his franchise has done an abjectly terrible job of surrounding him with competent pieces. The Blazers currently have one of the worst bench units in the history of the league. Even with Aldridge having a bit of a down season, the Blazers are 16 points per 100 possessions better when he's on the floor so far this year. Not a typo. The Portland bench has been about as bad as humanly possible, and even with Lillard's brilliant breakout year, the key to the Portland puzzle -- in the times it looks competent -- has always lied within their underrated superstar.

He's mettled with flawed rosters and poor style-fits. He hasn't necessarily been put in a position to succeed, but he's always done his best and he's done an inarguably great job. The burden of proof isn't on Aldridge or Garnett, and it never was. They did their part -- or in Aldridge's case, he's doing it now. But the burden to watch, examine, absorb? More than anything, appreciate? That's our burden of proof, as viewers and fans. Not theirs. 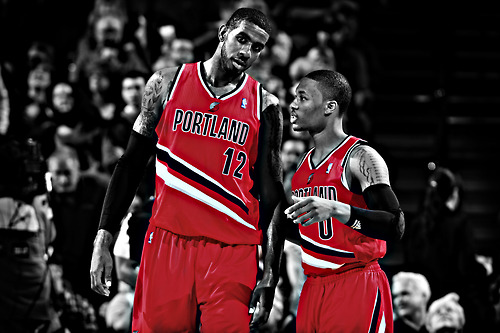 This post is dedicated to Caleb Kent, a Portland-dwelling friend of mine whose life's difficulty always seems to be inversely proportional to how ridiculously awesome he is as a person. Keep rocking, Caleb. You're the best. Legitimately.

• For more capsules on members of the Portland Trailblazers, visit the Blazers Capsule Directory •