As our summer mainstay, Aaron was writing a 370-part series discussing almost every notable player who was -- as of last season -- getting minutes in the NBA. As the summer dies down and the leaves turn, this quixotic quest of a series has happily reached the last third. But it's certainly not done yet! Today we continue with Josh McRoberts, Aaron Gray, and Spencer Hawes.

I feel like I've said this hundreds of times -- I'm not Duke's biggest fan. By extension, I tend to be quite low on Duke players in the NBA. Other than Kyrie Irving and Grant Hill (both of whom I consider myself a big fan of) it's hard to think of more than a handful of Duke guys in the NBA I enjoy watching at all. J.J. Redick is okay now that he's finally dropped most of his Duke persona and become more of a 3-and-D guy, as he always should've always been. Gerald Henderson's defense has always impressed me and his old school game is somewhat interesting. Luol Deng is a phenomenal person and a true baller. But what about anyone else? I've never loved watching Elton Brand (even though I appreciate him), Shelden Williams is skin-crawling, Mike Dunleavy bores me, Chris Duhon is infuriating, Carlos Boozer is Carlos Boozer, I'm the only person on earth who doesn't love Shane Battier, and Austin Rivers is possibly one of my least favorite players in the history of the league. Dear lord.

Despite all that, there's still something special about Josh McRoberts. I just viscerally can't stand watching him. It's probably the fact that, translated to an NBA level, he's an exact carbon copy of the classic Duke fratty pickup lemon. Let me explain. I played pickup ball occasionally at Duke, and there was this classic frat boy archetype that'd often enter the games. Different people, but they could all be described as gym rats -- in phenomenal shape, and by the looks of it, they were going to be great. So you'd always want him on your team... until the game actually started. You'd immediately be dissuaded of your previous view, owing to several things. Lots of blown layups, even really easy ones they shouldn't be missing. Absolutely no outside shot to speak of, not that it stops them from jacking threes every now and again or taking a lot of long two pointers. Remarkably bad grasp of the game's fundamentals, with absolutely no acumen at free throws and substandard rebounding despite being stronger than the guys he was boxing out. Worst of all? Lots of weird bro-talk "communication" on defense that never made any sense and often actively confused the entire team. Ugh.

It's phenomenally unfair that I can't really separate Josh McRoberts and his NBA game from these idiots who used to ruin pickup games. But I can't. At an NBA level, he's kind of their equivalent. Ton of blown layups -- especially last year, where he had one of his worst career years at the rim. He's great at dunking and all, but once you remove his dunks from the equation, McRoberts has a relatively slim set of skills -- he can shoot a three, if you get him open enough (which ironically would've made him pretty useful next to Dwight for the Lakers in the D'Antoni system), but he's bollocks between the paint and the three point line. His free throw form has always been really bad, and his rebounding has been substandard for a big over his entire career. As for the defense, characterizing him like the lemons is totally within my imagination -- I've read and heard absolutely nothing implying that he communicates poorly on defense whatsoever. He just kind of looks like one of those guys, so it makes it easy for me to imagine it. See? Really unfair. In an attempt to be less unfair, I'll state that he really isn't that bad. Seriously. He's young and he's had a bad season-and-a-quarter over the last 12 months -- if he can recoup over the next few months and land on a decent fit team next offseason, he could turn things around a bit and become the talented second-off-the-bench big man for a decent playoff team he's always been hinting he'll be someday. After he finishes extolling the virtues of Slug and Atmosphere, of course. Or talking about that ridiculous rager he had last weekend.

... yeah, I'm physically incapable of being fair to Josh McRoberts. Let's move on.

Here's a semi-comprehensive list of things Aaron Gray is very good at.

Here's a semi-comprehensive list of things Aaron Gray is not very good at.

This is probably going to sound weird, but Spencer Hawes represents one of the main reasons Bynum's absence frustrates me. On one hand, I don't like seeing Bynum out because he's a good player who's always worth a watch. On the other, I don't like seeing Bynum out because Spencer Hawes is so much less interesting without Bynum there. Really! Before the season, I was looking forward to watching how in the world Doug Collins was intending to make his preferred Hawes/Bynum lineup work. The basic understanding I had was that Hawes would act in the Pau Gasol role, playing the outsized C-as-PF role while Bynum played his Los Angeles role with significantly higher usage. They'd take advantage of Hawes' passing to form a good two-man game and take advantage of Hawes' surprisingly solid jump shot (note the high percentage from the midrange and the long two) to space the floor and give Bynum room to operate. I don't know if this configuration was fated to work very well. Defensively, Hawes has limited mobility and the Sixers were going to have to lean heavily on Bynum to help on defense and keep their schemes from falling apart without the luxury of letting Hawes float in the post/paint as a defensive C. Relying on Bynum to put up strong help is a tough thing to rely on.

And although Hawes is a decent jump shooter, he's like almost any big man -- he's better if you let him use his decent hook shot and take shots in close. And his jump shot numbers are a bit misleading, too -- they mostly came during an insane early-season stretch where Hawes looked like the league MVP for a few weeks. Hawes shot markedly worse after the all-star break, although to be completely fair, he shot just as well on jump shots in the playoffs as he did during the season, which tends to indicate he HAS actually made a decent hop forward as a jump shooter. One might note that his shooting percentage declined in the playoffs, but that ignores the fact that his percentage on-jumpers stayed even. The main problem he faced was that his shot distribution changed in the playoffs -- the Bulls and the Celtics were eager to let Hawes shoot outside jumpers and forced him to make them the majority of his offense, even if it meant giving up a few slightly open ones. He did an admirable job on them, especially from the midrange, but they never gave enough respect for the other Sixers to get open at the rim or from three. Which stifled Hawes' passing game and generally stifled a not-very-complicated Sixers offense.

Anyway. Bynum/Hawes is interesting primarily because, theoretically, it could work pretty well. A nice jump-shooting big man with some playmaking talent and a 7'0" frame next to a ball-dominant 7'0" center? Sounds like "exactly what the Lakers did", except in the Eastern Conference, where you don't actually need to add Kobe Bryant to make that a contending team. But I'm afraid it doesn't really matter to me if it works well or not, it just seemed interesting. Hawes trying to be a four is a fun thing to watch no matter who's next to him, but if you put him next to a quality player like Bynum, I have a lot of interest in seeing how that could work out, whether it succeeds or fails. This also ignores the main reason everyone should want to see it -- I refer of course to how we're all looking forward to the two of them combining to make the NBA look like the 70s again. By resembling, uh, "adult film" stars. Taste the 70s! ... no, not literally, oh God, you're gross. 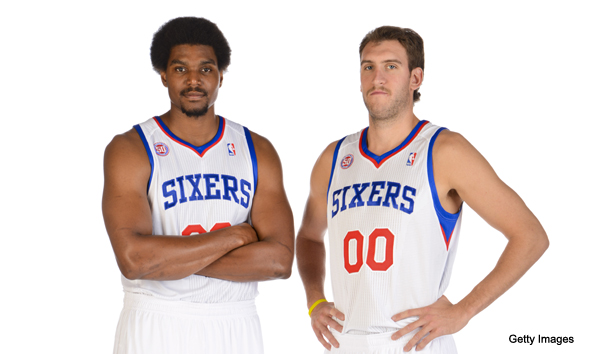 Off the court, Spencer Hawes is a card-carrying Republican whose pre-draft interviews indicate a man thoroughly unconvinced by An Inconvenient Truth. He IS convinced that the entire media is an overexaggerating liberal mess that overstates everything, though. He's at least half-right about the exaggeration, at least when it comes to political media and sports media. Not quite sure about the liberal thing. He has a "God Bless George W. Bush" bumper sticker, and he often goes on hilarious rambling twitter rants that imitate those of the ubiquitous uncomfortably vocal grandparent we all seem to have. He also might pull a Chris Dudley and run for office someday! Maybe Romney will throw him a thank-you endorsement. Beyond his politics, there isn't a ton to point out -- he, like Aaron Gray, is the most-likely-answer for the question of who exactly is going to take up the mantle as the NBA's next Brad Miller. Some would say Chris Kaman, but I'm with Trey Kerby -- Chris Kaman is the first Chris Kaman, which is a lesser Brad Miller, but distinct enough to be his own person. Hawes and Gray are more "Milleresque", so to speak. But Hawes has a ways to go before he truly proves his worth as the NBA's next Brad Miller.

Also: his nickname is "Ball-Friendly." Never forget that, folks.

At the end of each post, I'll be scribing riddles for the next group. Whoever gets the most right will get a shout out at the end of the next post. Tweet me your answers at @docrostov, or post them in the comments. Nobody got 3/3 yesterday, mostly because of my Colbert-themed shout-out for Spencer Hawes. But alas. Dr. No got a 2/3, so I suppose he gets to be Dr. Yes for a day.

Until next week, weary travelers.