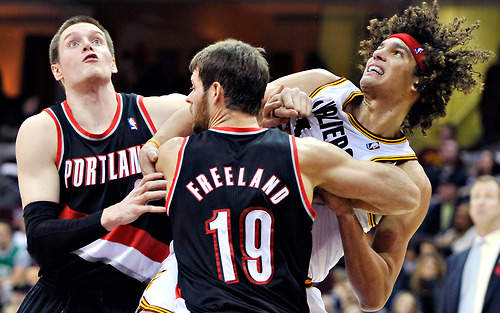 It was as if Nature, planning an Andy, had said to itself: "We will do this thing well. We will not skimp."

Anderson Varejao embodies many things. Effort and energy, heart and hustle, grit and grind. He's traditionally been described as something of a dirty tertiary player -- the most common depiction of Varejao is that of a feckless flopping savant, a play-actor miscast in the sport of basketball. The spitting image of the "European" big man -- floppy, long haired, and oh-so-annoying. Cavaliers fans have traditionally balked at this -- or at least, from personal experience, I have. There's so much more to Varejao than just a few flops. Summarizing his game as such made sense years ago, but things are different -- players change, and Varejao is no exception. The man has completely revolutionized his game over the last few years. The problem I've always had arguing against the idea that he's simply a flopper is that the image is simply very enduring. Fans of opposing teams have certainly seen Varejao flop on a dime before -- everyone has, even his own fans.

It's not that it never happened, it's that he's developed new facets to his game that have eliminated entirely his absolute dependence on the act. He still flops, from time to time, but it's more spice than main course. The garnish atop a multifaceted game, not the game itself. But people's minds are hard to change. Few things are more intransigent than a once-true impression. It's why people maintain friendships with childhood friends they can hardly stand. It's why repenting felons can't get jobs. It's why everyone cautions to make a good first impression. It takes a particularly enduring new image to make wholescale alterations to a now-false impression that was once gospel. And although I've tried for years to come up with a better impression, only yesterday did I finally think of one that's flexible enough to really describe and embody the talents of the big Brazilian.

Anderson Varejao is, above all things, the NBA's smile.

But let's not get ahead of ourselves.

As one gets older, they start to lose a bit of connection with their roots. I'm still young -- very young, in fact -- but I've already started to feel some of the inevitable drift of time. Years ago, I could flip through bundles of old drawings and remember exactly where I was when I drew a thing, no matter how droll or meaningless. I could recall exactly what I was feeling, thinking, experiencing. I can't really do that anymore. I can only remember impressions and colors, the broad strokes of life as-it-was. Life's funny that way -- as we remove ourselves more and more from the context that only we knew in the first place, we lose sight of these facts that not a single other being knew with our intimacy. Our personal secrets fade and our connection with our past becomes an echo, a reminder of the booming closeness that we once knew and loved. But there's one thing in life that transcends this. A single action that in one fell swoop brings us back to the best moments of our roots and our fledgling moments.

That single thing, above all else, is the unfettered joy of an uncontrollable grin.

The shortest distance from the cradle to an elder is the involuntary smile. We're trained, in some ways, not to give in -- we try so hard not to! We're too old for that, too serious. We try to quash it. Nope, nope. Not today. Can't be childish, can't experience that sort of incessant and inexplicable giddiness that befits a much younger soul. But the bad joke is just too awful. The coincidence is too funny. The moment is too perfect. And we have to smile. The dread grin spreads across one's face, and in that moment of beaming elation, the mind empties of all its worry and woe. The concerns of the old fade for that single childlike moment, before we counteract the grin and terminate the feeling. We are young again. The connections to our younger selves reemerge, for a fleeting moment, and we're as we once were. A laughing child, unaware of what exactly we're laughing at. Unaware of anything but the fact of the happiness itself.

We naturally stifle the involuntary smiles, the laughter, the joy. Internally deem the acts childish and unbecoming. And I suppose, when you get down to brass tacks, it usually is. But I reject the idea that "childish" is always a bad thing, especially when it comes to this. This hearkens back to one's best moments, the effortless happiness of the young and the innocent. These aren't moments to quash. They're moments to treasure.

Anderson Varejao plays basketball, but he plays it like a child's game. We tend to call out basketball as a "man's game" -- the phrase being rather inextricably tied to notions of sports as man's ultimate domain. It often has sexist implications, implications that tend to be the only problematic undertone that bear notice. But it also implies something else that's a bit problematic -- the idea that basketball is a grown-up game, far removed from a child's sport. True at times, but I'd argue it isn't necessary. Basketball doesn't need to be an adult's game any more than it needs to be a boy's only club, or any more than golf needs to be a white's only club. A "man's game" is a playstyle, but it's never been_ the only way to play the game. That's an invention. It's like our aversion to uncontrollable laughter or our inherent desire to stifle an involuntary smile -- we don't _need to stifle ourselves, we just feel an obligation to.

We don't need to play basketball like adults, we just feel an obligation to.

Thankfully, Varejao doesn't feel that obligation. His personal filters, insofar as they ever existed at all, are gone. His game embodies a sort of childlike wonder. Most of Varejao's havoc is wrecked on plays that he never was supposed to be involved with in the first place, lunging in from halfcourt to slip between two players and ace a tip-in nobody realized he was looking for. Jumping a passing lane to gum up a possession nobody realized he was paying attention to. Taking a flat-footed 20 foot jump shot that nobody realized he had in his arsenal, then punching himself repeatedly in the head to emphasize how little he thought about it. It's the off-ball movement, the breakneck defense, the floppy hair. And it's almost all done with a smile -- when things are going well, few NBA players spend as much time on the court with a vacant grin as Varejao.

There is little grace in joy alone, but that's partly the point. Anderson Varejao's game is hardly graceful. It's blocky and tentative, flopsy and energetic. But everything he does is wreathed in drops of happiness. There's that ADD tendency of a small child -- he flits from play to play, doing tons of different little things on every other possession. He does it all well, too, regardless of the happiness -- even though he rarely flops anymore, he's still got that actor's joy when he does it. When he shuts down a big man in the post with his pesky in-your-face stylings, he's doing it with a smile and a wink. When he grabs 20 rebounds in a game, he grabs every one of them with this infectious and indescribable enthusiasm. It's hard to be down in the dumps when you watch a good Anderson Varejao game -- the enthusiasm creeps upon you, and shakes you by your scruff with the vigor of a younger man. "Hey! Don't worry!" it says, scuffing your hair. "Life's cool! Things are rad! Now let's play a game, OK?"

Joy is essential. Life's too short for it not to be. Anderson Varejao's game reflects an advanced understanding of that. It's a game above all else -- a serious game, a "man's game", a game with breaks -- but it's a game all the same. And for that, I will never cease to love and enjoy his game. It makes me smile. It makes him smile. He is a smile, personified. And as he gushes with his graceless artistry, I come around. Anderson Varejao isn't a player to quash, flopsy though he may be. Varejao doesn't need to be young to live young. He's a cracker-jack treasure, his style an unyielding echo of youth, bellowed from a canyon and left to peter out in perpetuity as a happy reminder of the days we've left behind. 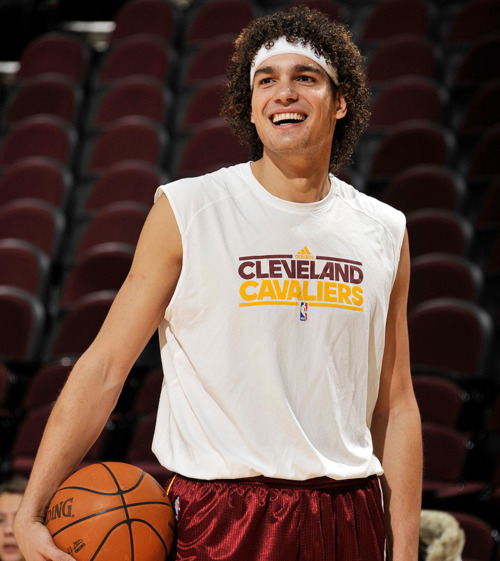 • For more capsules on members of the Cleveland Cavaliers, visit the Cavalier Capsule Directory •