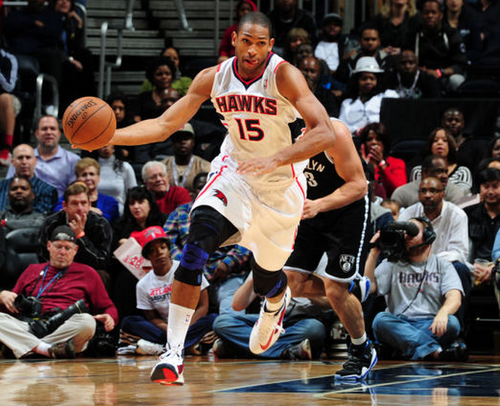 Coming off my 370-part player capsule series, I'm taking on a significantly less absurd task -- a 30-part frame examining the evolution of the individual teams in the NBA's 2013 season. Some in medias res, others as the season ends. Somewhat freeform, with a designated goal to bring you a few observations of note about the team's season, a view into the team's ups and downs, and a rough map of what to expect going forward. Today, we cover a team I was a bit higher on than a lot of people -- the 2013 Hawks.

Throughout the capsules, I expressed a general thought that the 2013 Hawks weren't going to be as bad as most people expected. Many saw them as a fringe playoff team -- I thought it was reasonable to go a step further and call them a team with a puncher's chance at first round home court. After all. Though most people vastly underrated what Joe Johnson brought that Atlanta team, so too did most people vastly underrate what Lou Williams had the potential to bring them. Combine that with a bit of help off the bench through Devin Harris and a full season of their best player, Al Horford? The Hawks always had a good shot at being the same exact 4-5 seed type team they've been since 2009, despite Ferry's apt blow-it-up style asset trading. Checking in today, the Hawks have banked 45 of their 82 games. They sit at 6th in the East and 2nd in their division, 4.5 games behind Miami and 12 games ahead of Orlando. They've gotten a lot of benefit out of an easy schedule, but they are once again neither atrocious nor excellent. As they say: they are who we thought they were. Let's talk Hawks.

TRENDSPOTTING: ATLANTA AT A GLANCE, IN TWO WEEK INTERVALS 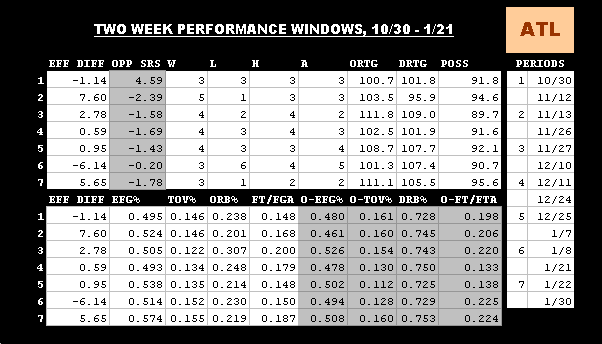 On an overall level, after 45 games, the Hawks have finally entered the fringes of the top 10 (9th overall) in Defensive Rating. They're marginally below average on offense, rating out as the 16th best team. If you adjust for strength of schedule, their defense remains 9th-ranked, although cardinally less impressive. In a related story, their adjusted offense rating drops them to 19th overall. (They aren't a particularly fun team to watch, that's all I'm saying.) Additionally, they've played 17 of their 30 cross-conference contests -- they're one of just four eastern teams to post a winning record against the West, at a strong 9-8. Not bad for a team with no shot at the playoffs.

ATLANTA'S PERFECT PACE: Keep it steady, and FAR AWAY from grinds

Last season, around the conference finals, I performed an analysis of each conference finalist's "perfect" pace -- essentially, I split pace into four buckets (slow, mid-slow, mid-fast, fast) and assessed records and efficiency for each conference finalist in each bucket. Given the Hawks are a good teaching example, I decided to bring that general type of analysis back in an effort to give you a bit more context on the way Atlanta's best suited to play. So, a reminder of what's going on here. I've split every game played this season into four buckets based on the number of possessions played -- one for slow, one mid-slow, one mid-fast, one fast. Quartiles. I've set up my program to update the quartiles as more games get played, so the designations may change slightly as time goes on.

As for the statistics provided, they're quite similar to that you'll see above. There's the team's efficiency differential in that pace bucket, the average opponent differential of their opponents in that bucket on all games played, wins and losses, home and away totals, offensive ratings, defensive ratings, and a nice collection of the team's four factors stats. Good talk. Here's how the Hawks have done by each bucket:

Some interesting stuff. A few observations on the overall distribution here.

The Hawks aren't a great team this year. They really aren't. While Horford's been back and in relatively decent form, he's been a slight bit removed the all-star caliber play that made him such a steal for the Hawks from 2010 to 2012, especially on the defensive end. In that duration, Horford played like a legitimate star -- never one of the 10 best players in the league, but always a top tier big man and one of the better players in the Eastern conference. He was the steady hand to Josh Smith's unpredictable bursts of energy and supreme competence. This year, he's been good -- his per-minute averages are about where they always are, but he's been markedly better in wins than losses -- 55% shooting in wins, 50% in losses. His free throw rate plummets and his defensive intensity does the same. It's not really Horford's fault at all that the Hawks are relying on him to punch a bit too far above his weight, but he can't be excused for being relatively nonessential in their losses either.

The thing is? This season simply doesn't matter that much. This offseason, the Hawks are -- theoretically -- set to clean house. Their books are going to be clean as a whistle for the first time since the mid-aughts, and their assets are going to be stronger than just about any other team in free agency. If Dwight Howard chooses to leave Los Angeles, Atlanta's his best choice for him. Same goes for any major free agent, really. Their books are clean, their management is sound, and their supporting cast is going to be far and away better than any other big free agent draw on the market in the 2013 offseason. Think about their supporting cast for a moment:

Who else? Nobody. Absolutely nobody! But of those five players, three of them are obvious assets (strong players on cap-friendly deals), one is a question mark but a possible asset (Mike Scott), and one has Lincoln tattooed to his adam's apple. No other team can sport out a roster with an all-star, a volume scoring wing, and a nice high-upside rookie to surround their new acquisitions. The Hawks are set to have twenty to thirty million dollars of free space to fill with an affordable Ferry-stamped supporting cast around a max level star in a hilariously weak conference. If Ferry plays his cards right, the Hawks could end up as one of the best teams in the East for years to come. A new-age Howard-era Orlando Magic without Otis Smith to muck things up.

Sure, Atlanta isn't anyone's most ostentatious free agent play. They won't win on flash, pizzazz, or glitz. But just on the court, in the team that Ferry has the opportunity to build? The Hawks have made a formidable case for themselves, and one that Danny Ferry is preparing to give to whatever big stars don't go on a good postseason run. The Hawks may bow out peacefully in the first round this year. I'd expect that. But puttering around the 4 or 5 seed in a rebuilding year -- a year where they'll actually have a legitimate shot at taking a huge leap -- is a fantastic position for a franchise whose city is tepid enough that they can't tank in a horrifying manner. He probably won't win it, but he deserves it -- Ferry's work as Hawks GM has been great regardless of how this all turns out, and the man deserves more recognition for his successes. Don't trust this year's Hawks, no. But trust Ferry's management. The man knows what he's doing, for better or for worse.

I told you all I'd try to come up with a riddle. But since I'm dealing with teams, now, riddles come cheap -- I'll be using a trio of random statistics or facts from a random subset of the next team's last season. If you can intuit what the next team is from these numbers, you're a scientist of the utmost brilliance. Today's facts about our next team are: