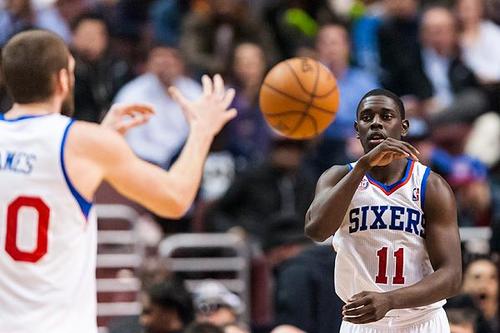 Coming off my 370-part player capsule series, I'm taking on a significantly less absurd task -- a 30-part frame examining the evolution of the individual teams in the NBA's 2013 season. Some in medias res, others as the season ends. Somewhat freeform, with a designated goal to bring you a few observations of note about the team's season, a view into the team's ups and downs, and a rough map of what to expect going forward. Today, we cover a team I was skeptical of entering the season, but whose collapse I really didn't see coming -- the 2013 Sixers, of course.

Fun story -- I actually didn't like Philadelphia that much as we entered the 2013 season. A few reasons for that: Bynum's injury was worrisome given his prior injury history, they replaced their best offensive player (Lou Williams) with Nick Young, and I wasn't a big fan of any of their non-Bynum moves. Still, the general consensus that they were a high upside team with potential outclassing the names on the roster -- after all, Doug Collins had guided a roster of relative no-names and young castaways to a game short of the Eastern Conference Finals a year prior, right? No way they'd disappoint. Except for the "no way" part, since that's exactly what happened. Let's examine how.

TRENDSPOTTING: PHILADELPHIA AT A GLANCE, IN TWO WEEK INTERVALS 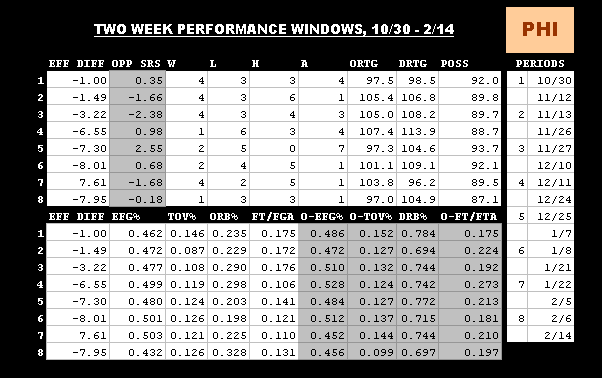 Let's not beat around the bush -- the Sixers have been poor. Awful. Atrocious. They're still in the weeds of a tepid Eastern playoff race, but that's only on the assumption that Rondo's absence eventually leads to a Boston collapse -- it's unlikely they leapfrog Milwaukee, so Boston's theoretical collapse is their only real in-roads. Matters are further complicated by the fact that the two teams directly around them in the standings -- Toronto and Detroit -- are both a touch better than they are. At the 51-game mark, the Sixers rate out as one of the worst offensive teams in the league and a marginally above average defense. They're a defensive team, theoretically, but they're mostly just a bad one -- all things considered, Washington's shown a much higher defensive ceiling than Philadelphia has and they're a better offense as well, now that Wall's returned.

Last season, around the conference finals, I performed an analysis of each conference finalist's "perfect" pace -- essentially, I split pace into four buckets (slow, mid-slow, mid-fast, fast) and assessed records and efficiency for each conference finalist in each bucket. I've decided to bring that type of analysis back to give a bit more context on the way teams are best suited to play. A reminder of what's going on here: I've split every game played this season into four buckets based on the number of possessions played -- one for slow, one mid-slow, one mid-fast, one fast. Quartiles. I've set up my program to update the quartiles as more games get played, so the designations may change slightly as time goes on. As for the statistics provided, they're similar to those you'll see above. There's the team's efficiency differential in that pace bucket, the average opponent differential of their opponents in that bucket on all games played, wins and losses, home and away totals, offensive ratings, defensive ratings, and a nice collection of the team's four factors stats. Good talk.

Here's how the Sixers have done by each bucket:

Some interesting stuff. A few observations on the overall distribution here.

I really can't restate it enough -- the Philadelphia 76ers are one of the biggest disappointments of the season. The higher profile struggles of the Lakers and the Celtics have obfuscated it, but this is an astonishingly poor season for a franchise that thought it was putting its hens in order. In the preseason, I thought they'd go 40-42. That's good for a 3 game drop from last season's standard, but hardly anything close to the currently projected 35-47 record that Basketball Reference forecasts them for. There were two main causes, so far as I see it, for their currently awful season.

The second bullet is the more important one. They may yet sign Bynum to a max contract, and he may yet suit up and prove he deserves it. But Philadelphia got worse at virtually every position they touched this summer. That's phenomenally hard to do. It's also difficult to have a year as bad as the one Philadelphia's having in concert with your young stars having breakout years, but Philadelphia's aggressively poor offseason made sure of that. Seriously -- Jrue Holiday has taken a quantum leap forward and Thaddeus Young has looked phenomenal this season. If during the offseason you'd told me that either of those would happen, I would've predicted 48-54 wins. Even if Bynum was out! But alas. Sometimes your moves simply don't work out.

This season's an obvious casualty of a few moves that didn't work out, but it's worth mentioning that next season may be out too. Philadelphia currently has $44 million in the books for next season, and that's without resigning Bynum, Nick Young, or Dorrell Wright -- once they resign Bynum, they'll be over the salary cap and reduced to scrounging for the lower-priced scraps on the market. It's certainly possible that a three man core of Bynum/Holiday/Thaddeus can contend for a middling-tier playoff spot in a barren Eastern conference, but it's hard to see a championship endgame for a team like that without some excellent depth and some better wings. If Evan Turner didn't look atrocious, that might change matters -- but he's looked bad.

The Sixers are perilously close to losing all financial flexibility, partly because of their taking on Jason Richardson in the Andrew Bynum deal. Richardson's looked over the hill with a foot out the door for two seasons now, and he's still got $12 million left on his contract after this season. Richardson probably takes Philadelphia out of the picture in the incoming free agency bonanza during the 2014 offseason. Which all translates to a murky, hazy future. Philadelphia doesn't look like a title contender, or anything close -- if they resign Bynum, their upside appears to be a second round Hawks-type faux contender. What's the endgame? I really don't know. We'll see soon enough.

Since I'm dealing with teams, now, riddles come cheap -- I'll be using a trio of random statistics or facts from a random subset of the next team's last season. If you can intuit what the next team is from these numbers, you're a scientist of the utmost brilliance. Today's facts about our next team are: