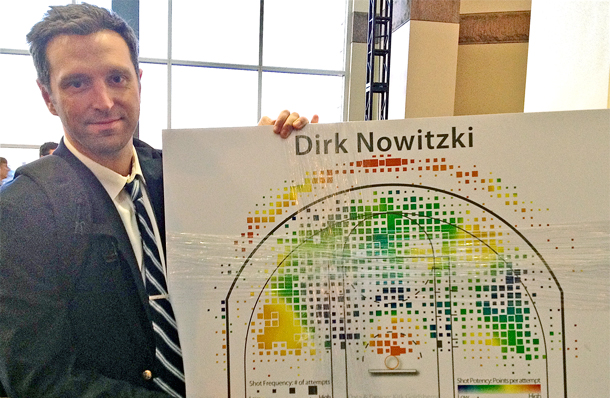 One of Sloan's standouts this year was Kirk Goldsberry, the intrepid visualization expert you know from Grantland, the New York Times, and Court Vision. Goldsberry's value starts with his data, which is simply better than the data most of us have to play with. He partners with SportVU, allowing him to delve into an increasingly rich set of real-time court location data. It's pretty amazing stuff. That said? For the second year in a row, Kirk Goldsberry didn't win Sloan's yearly paper competition. In it, eight finalist papers and presentations are assessed by the conference leads in competition for a ten thousand dollar prize. Every year, the vast majority of the people who attend the presentations swear that Goldsberry has a lock on it. "His work is the best," they say. "There's no way any of the other presentations can stand up." For the second year in a row, they were completely wrong.

The reason's straightforward. Much like last year, Goldsberry had the best presentation. It doesn't take a genius to understand Goldsberry's goals and methods, and his visual metrics, humor, and graphs made his presentation infinitely more fun and engaging than any of the other competitors. But the ten thousand dollar prize isn't awarded to the best presentation in a vacuum. It's awarded for the paper's analytic heft. Goldsberry's metrics were simple, straightforward, and extraordinarily well presented. I can't imagine that more than 1 or 2 individuals who attended all the paper sessions thought otherwise. When I think back on the 2013 conference in a year or two, I can almost guarantee that Goldsberry's paper will be the one I remember. But Goldsberry's success at capturing our minds with visuals and intuitive presentation obfuscates the fact that his work simply wasn't the most technically advanced or statistically interesting of the presented papers.

He calculated field goal percentage based on a defender's distance from the offensive player, and delved into some particularly excellent examples. It was a nice sleight of hand and an excellent filtering of data. It wasn't rocket science, but it was effective and intuitive rather than gaudy and statistically brilliant. Contrary to popular belief, Goldsberry's intuitive statistical arguments don't have to be the sort of analysis that wins a paper competition. Goldsberry's work has its own value, and outside the carefully combed and regulated world of the paper competition, it's far more valuable for real-world analytics than anything that won the competition over him. Immediately after his presentation last Friday concluded, R.C. Buford made a beeline for the podium and gave him a business card. R.C. Buford! Goldsberry has a good shot at consulting with half the teams in the NBA by this time next year.

His value becomes even more obvious when the conference attendees step back and take a look at themselves -- I talked to dozens of smart analysts who swore up and down that Goldsberry's presentation was not only the best presented presentation, it was also the greatest step in analytics since Babbage invented the difference engine. It wasn't, and I'd venture that anyone who'd read the papers would agree with me -- it was smart and poppy but significantly less interesting as a statistical concept than any number of the competing papers. But it never had to be that advanced. It simply had to be well-communicated. It was a real-time example of the conference's general theme. Having the best ideas can win you a paper competition among your statistician peers, and it can earn you the respect of many.

But if you really want to resonate, it's simply not enough to present good numbers.

You have to be able to tell a story.

Advocates of statistically minded basketball analysis have an odd tendency to conflate the strength of a communicator with how advanced and groundbreaking their statistics are. It betrays what I find to be a fundamentally hilarious undertone to most of the statistics-backing analysts in the basketball sphere. The sphere of basketball analytics has been blessed with a large group of brilliant and clever individuals with some incredible ideas. But for the most part, they aren't statisticians. There's absolutely nothing wrong with that, mind you! But the fundamental truth that most members of the "statistical movement" aren't statisticians becomes a bit ridiculous when you note just how vehemently the very same people assert themselves to be excellent judges of statistical technique and complexity. When people insisted that Goldsberry's work was statistically brilliant, I was bemused -- it's phenomenal work, but calling it brilliant because of its statistical heft is just wrong. It was brilliant because Goldsberry is a borderline savant at distilling numbers into a story. He's a phenomenal communicator who relates to his audience in a way that should be the envy of all who profess to analyze anything.

Now, granted, the point here in the most general sense is that there's nothing wrong with being unable properly assess the statistical complexity of a person's argument. But it's terribly confusing to me that people insist on doing it anyway. There's this strange desire to attribute Goldsberry's brilliance to everything but his status as a communicator, as though that somehow lessens his accomplishments or his ideas. It doesn't. At all. Let me put it this way -- I'm a statistician in the corporate world, and I'm not going to reveal to anyone who isn't close to me exactly what I do. But communication isn't just some tertiary part of my job. It's essentially my entire job. I make models, big and small, and I work with statistical analysis daily. But if I couldn't communicate the results of my work to an exceedingly wide range of people, I'd be homeless. Once you get to a certain level in the professional frame, the discipline of statistics is less about coming up with amazing statistical innovations as it is simply finding ways to share the ones you already have. It's about couching your numbers in the proper confidence intervals, and figuring out the best ways to differentiate your story as your audience changes.

In fact, one could say that it's about painting.

See, the numbers don't tell a story on their own. They simply don't. An advanced database of basketball statistics isn't a storybook, it's an exceedingly large collection of paints and primers. The analysts -- the ones sifting through the database and poking at insight -- they're the one the story comes from. They're the painters. A palette tells you nothing without a painter around to unveil the contents of their mind. The numbers are not self-explanatory. You can't simply hand a smart person a spreadsheet and tell them to read it -- you need to guide them to the point and the core idea, and you need to persuade them that the ideas are worth their time. You need to paint different styles for different audiences, too. A young painter may look at your 10 minute modern art splatters and understand your point immediately -- a crotchety old traditionalist may need a classically-minded several-hour portrait if you want to express to him the same one. It's a process. A beautiful painted process.

I've read a few response pieces to the conference openly questioning the focus on communication. "Are there really GMs and team owners who don't understand that you need to hire communicators?" First: yes, there are a few. Second: even if there weren't, I'd argue that the message isn't just for them. The message is to the statistically minded analyst who wants to be listened to. The message is to the fans who lean on statistical arguments. The message is to everyone who thinks that any numbers -- no matter how overwhelming -- can speak for themselves. There's a reason numbers never lie, you know -- they can't talk. They're illuminating under the right conditions and support good arguments under many other conditions. But it's the responsibility of the communicator to ensure that they're presenting an argument their audience can get on board with. It's not the responsibility of the audience to ensure that they're attuned to the presenter's whims and fancies.

Kirk Goldsberry's communication isn't some tertiary part of what makes him an excellent analyst. On the contrary -- it's the core. As someone who works professionally in the field, I respect that quite a bit -- Goldsberry is an academic, but he's got exactly the skillset that would make him an amazing industry statistician. The moral of the Sloan conference, to me, was a reflection of Goldsberry's success. The ability to function as a good communicator is the most important skill you can have if you're a statistician working in industry. News flash: statistical analysis in sports is no longer an academic exercise. Sports statistics have become their own large-encompassing industry, and along with that, the skills that make statisticians valuable in industry have become the focus in sports statistics.

Statistical analysis in sports is no longer a novelty -- it's a necessity.

It's time for the communicators to match that reality.