Remember how we had that one series, a long time ago, where we'd entreat our writers to scribe short vignettes on the previous night's games? We've consistently discovered there's no way for us to do that every night, but with the capsules done and Aaron back in the saddle as a more active managing editor, we're hoping that we can bring the feature back as a weekly Wednesday post. Sometimes Thursday, like today. As always, the vignettes may not always be tactful, tacit, or terse -- they'll always be under a thousand words, though, and generally attempt to work through a question, an observation, or a feeling. Today's short pieces are as follows.

And yes, this does mean that the next episode of Fallout: Phil Vegas comes Friday. Alas. Read on after the jump. 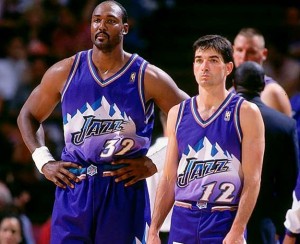 There’s not much to say, constructively speaking, about the game the Thunder and Jazz played in Salt Lake City on Tuesday night. Despite being a key part of the battle for playoff seeding and first-round matchups for both teams, the affair was surprisingly low on energy and low on excitement. For the Thunder, the prize was gained ground on the San Antonio Spurs for the first 1-seed finish in franchise history. For the Jazz, the prize was gained ground in the battle with the beleaguered Lakers for the 8th seed of the playoffs.

Were I asked which team would “want it more,” I’d be inclined to assume the Jazz. The product on the floor indicated that either choice would’ve been inaccurate. The Utah bigs who dominated the interior in the previous matchup between these teams were a virtual nonfactor, and much of Oklahoma City's execution in the final minutes of the game was comprised of Kevin Durant force-feeding outlet passes to the wing, attempting to finish off a triple-double. (Note: he didn’t). With the exception of a Westbrook steal-and-jam to seal the game in the final moments, there wasn’t much to intuit from this matchup beyond the fact that these two teams simply aren’t very evenly matched. Their records reflect that. It isn’t the kind of win that changed my feel on this Thunder team one way or the other, nor do I expect it did for any Jazz fan and their team’s respective playoff aspirations.

Then again, it may just be that I’m uniquely unqualified to write about Utah, being that I’m perhaps more unfamiliar with them in their current state than I am with any other team in the league. I remember the first time I ever watched the Utah Jazz play. Not specifically, but vaguely -- it was sometime in 1997, in the Finals against the Bulls. Like most kids in the 90s, I was a Michael Jordan fan, which meant I was a quasi-Bulls fan. I couldn’t tell you much about the team beyond Jordan, Pippen, and Rodman being their best guys, but that’s a serviceable amount of knowledge when you’re seven years old. I knew even less about the Jazz; I knew Stockton was the little white guy and Karl Malone was the big guy who reminded me of a football player. That was about it. I hated them both, and by extension their team. In retrospect it seems silly. Hindsight informs us that no one ever really stood a chance of dethroning Jordan. (Ed. Note: Oh, come on -- the Jazz stood a little chance, at least!) But at the time -- to my 7-year-old hoops love -- these guys were absolute villains; the stand-in Monstars in a real life Space Jam.

Obviously, that was then. These days, I don’t think about the Jazz very often. They’re a relatively young team with an average-to-poor coach. Despite being pitched to me as “the next Thunder” by some optimistic Utah residents a year or so ago, the Jazz don’t really look to be on track for the same level of success. It’s a bit telling to me that when you say “Utah Jazz,” my first thoughts are of those Stockton/Malone teams, a talented bunch that were nonetheless thwarted by an immovable object. When I watch the Thunder suffer a bad loss this season (as they did against this Jazz team in the previous matchup), I idly worry whether 15 years down the road I’ll be thinking about the Westbrook/Durant days. "If only we hadn’t run up against LeBron James, we could’ve won it all."

On the other hand, when I see Westbrook intercept an inbound pass and hurtle the length of the court, slamming down a wild dunk in a breathtaking display of athleticism to seal the game? It feels as though he’s attempting to outrun a squad of alien ballers, beating the clock to save Looney Toon Land. And in my heart, I feel very palpable relief. Things will be, and then they won’t, and then they will again; as it was for the Jazz, and as it will be for the Thunder as well.

POR vs LAL: The Worst Outlet Ever Written
Alex Dewey

The Rose Garden's court has always brought a smile to my face. Fantastic stuff. Part of it's the crowd, part of it's the giant hurricane-eye in the center of the court that frightens and startles and evokes images of a giant floating Ngyr-Korath. That 2010 Portland team was one of my favorites; Andre Miller, Patty Mills, and Marcus Camby spearheading an incredibly likable team that got an amazing boost from the crowd... well, OK, Patty and Camby hardly "spearheaded" the team. But they were there. They were there, and that's all that mattered.

Yes, yes. I'm sure if I could hear some of the things said on the court, it would cease to be a place of wonder and awe in my eyes. Perhaps there would be vile or cultish things said by the fans that surround the court. I'm sure the Rose Garden -- when you enter it and become used to your surroundings -- is just another place. I'm sure that I could find a reason to make it feel inauthentic or wrong or both. I'm sure that I could find a way not to have fun because that's the only way I could distinguish myself from a lot of Blazers fans. That's what writers do. We look at something beautiful and we find the ugliest thing, to focus in on and show how perceptive we are. And it's wrong, and we miss the forest for the trees. You miss a lot when you don't step back and appreciate greatness.

Watching last night's game, I felt that Kobe got (... relatively speaking) cheap call after cheap call. Granted, the cheap calls went with a legitimately amazing and inspiring offensive performance that anyone can amply appreciate. Pau and Dwight looked quite good on offense despite the Lakers as a whole being a defensive free verse poem; not a lot of structure, usually lazy, and completely lacking in capital letters. The Blazers as a whole had a heck of a game, despite a swoon at the worst possible moment. Lillard -- whatever you think of his poise -- is sort of a savant at shooting. (Ed. Note: Lillard is ranked 36th out of 92 guards in the NBA in true shooting percentage. Not sayin', just sayin'.) Lillard reminds me of Kobe or Stephen Curry, in the sense that he can take any shot from any range and it will retrospectively appear to be the only possible way to make it. I'd say Gil but there's some baggage there now. (Ed. Note: Baggage filled with guns.)

It's that feeling, you know? It's that feeling that Lillard is simply a pure shooter. Shot selection and his uncomfortable rim percentage will always keep him from one that oft-puffed list of e_fficient-and-rationals_, not to mention his hilariously poised feel-for-the-game that would probably break a graph in two just by looking at it. The axes would disperse, irrelevant to his evil glare. It's not just that Lillard gets hot, it's that he's fully-formed without a conscience, resting heart rate of 3, an ice-cold heart that can get up to speed pretty quickly, all considering. He gets hot, which is to say he metabolizes entire cities with his poise and takes the heat and makes it into a 30-footer that bursts into flame. (Ed. Note: What does this paragraph mean at all even.)

All that praise for Lillard aside, writing this makes me feel sad. Because all I could think about -- perhaps because I write things -- is that it made me pretty sick to my stomach to note that Portland hosted an MVP chant for Kobe Bryant. Who do you think you are, Portland Lakers fans? Showing up to desecrate the scrappiest possible arena, featuring the scrappiest fans in the league? You know who you are, and you make me sick! -- ... unless you moved there from L.A., in which case I guess I'm alright. But cripes, this isn't Lakers-Clippers! You go to an opposing team's arena as a guest! You don't steal their arena's magic!

This makes me sick. I know sports is all about the upheaval of hallowed traditions while cheesy traditions endure forever, but come on. They swept you guys in 1977. Argument over. And that was a real super-team, a real example of the 5v5 red and white logo abstractly representing basketball, not the studio gangster 8 seed that got carried by its avatar yet again. Actually, you know what? I choose to hope (and to trick myself now into remembering to block out the pain) that the Blazers fans, savvy and worldly, helped out with that chant. Because Kobe is the Lakers' MVP. Truth be told, he's all the team they have, at the end of the day. The Blazers know, and laugh. Nic Batum is quite young, and Kobe is quite old. And some day that seesaw of time will favor them.

It's like alternating Russian dolls of ugliness and beauty and personal fouls.

Sidenote: I'm not going anywhere with this but I thought of a cool promotion for arenas when you have these big games in multi-team markets (or otherwise geographically mixed fanbases, or situations like Heat-Knicks or Lakers-anyone). Okay, so check it: included in the price of your ticket is a wristband. Alright? With me? Keep it going. If you support the home team you buy one color wristband and if you support the road team you buy the other. Then -- check it out -- on the screen they'll have some sort of GPS thing that tells the teleprompter as well as anyone with a smartphone app where the friends and enemies of the team are. I mean, this probably doesn't work for sports where riots happen, I guess. Actually this would proverbially cost more literal lives than it would metaphorically save if you introduced this in Europe for football matches. This would actually kill people. Men and women would die because of my horrible idea, is what I'm getting at. ... But think of the apps you could make!

Aaron here. I have an inconveniently placed fever... one that I stupidly made worse through my dogged insistence on watching the Spurs get pummeled by Denver last night. Hence the lack of Fallout: Phil Vegas today. I'll try to get a new episode done for Friday. In the meanwhile, please enjoy this Outlet as a peace offering. Thanks friends.