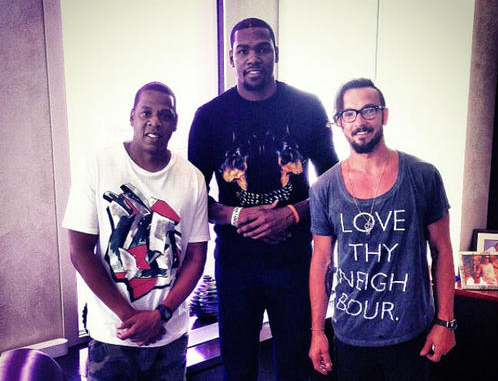 The NBA Finals have come and gone. I haven’t had much to say about how they played out since Game 7, and it’s probably best for all of us if I keep it that way. However, if you’re really curious, it’s accurate to say that the fan in me was displeased. Yet here we are! The wounds remain but the hardship is momentarily over for those of us whose teams were not destined for golden glory. It’s that most wonderful time of year, the off-season! Soaring hopes! Speculation! High crests of cheering excitement and cavernous voids of crushing disappointment. Hey, come to think of it, it’s actually exactly the same NBA fan experience one endures the rest of the year... only with front office dudes in suits rubbing their foreheads instead of sick dunks.

Well, here we are. We’re only a brief time away from draft night, and we’ve already seen some intriguing trade developments regarding picks and coaching staffs. But those topics are complex, and deserving of their own posts. Here I’m going to stick to a subject you probably stopped caring about two weeks ago, if you even cared in the first place: Kevin Durant’s signing with Jay Z's Roc-Nation.

Should we be concerned that Kevin Durant chose to change agents? Should Oklahoma City fans be quivering in small market inadequacy at creeping thoughts of the star fleeing for the bright lights of one of the coasts? If all that sounds kind of silly, it’s because it is. (It's also because I’m laying it on pretty thick.) Despite this story breaking amidst one of the most exciting NBA Finals in recent memory, the questions it apparently raised in the minds of both Thunder fans and the larger public have gained a surprising amount of traction. Why would small-market hero Kevin Durant abandon Rob Pelinka and join the unproven glitz of Roc-Nation representation? What does this mean for Durant’s future in Oklahoma City? The answers may surprise you.

First, I don’t think anyone should be __shocked __Durant decided to seek new representation. People who track these sorts of things have noted that in this past season, KD had more nationally televised ad appearances than any other NBA player. I’m willing to take that claim at face value; I’ve seen that Sprint commercial with the shrunken up PJs and watched KD ride a bicycle real fast in a dorky helmet enough times that I see them on the back of my eyelids when I go to sleep. Plenty of people defending Rob Pelinka’s representation have used Durant’s high number of appearances to argue that KD should be more than happy with his current situation, and has no reason to leap to an unproven partner like Jay-Z. (Related note: there’s a surprisingly large contingent of online commentators with deep-seated investment in the success of high-profile sports agents. Who knew?)

I think the idea that Durant "should be happy" requires a little critical examination. What commercials do you remember seeing Durant in this season? There are the ones I mentioned, with the pajamas (by far the family favorite), and there’s the disappointingly un-prescient Gatorade ad with Wade. There’s that one BBVA one where he spends much of his time in background while the camera’s attention stays firmly focused on some guy that looks like Gary from FX’s Justified. There’s the one where he rides the bicycle. Supposedly there’s the “KD is not nice” advertisement, but I’ve never seen that air once on television and wouldn’t know it existed were it not for YouTube.

Now, compare these campaigns and appearances with Chris Paul’s “Cliff Paul” line. That campaign was EVERYWHERE. It had charm and creativity; it featured Chris Paul foremost in a quirky situation. It had an alter-ego (a classic staple of any advertisement using an NBA player). It was played out in gags at nationally televised games, in social media, and achieved the kind of crossover appeal you only see from really catchy campaigns. My grandmother hasn’t watched an NBA game in her life and barely knows who Michael Jordan is. She still asked me about Chris Paul after being charmed by those ads.

How about Adidas’ campaign for Derrick Rose? You know, The Return? Hashtags on hashtags? That guy didn’t even end up returning, and it was STILL one of the most successful and culturally successful campaigns pitched in a long while. Appropriate for a dominant Bulls star, it went beyond simple cutesiness or sight gags, aiming instead for myth-making. The melodrama and production of it all was evocative of classic Jordan ads, a throwback to a time not-so-long-ago when a players’ brand and advertisements were carefully cultivated to establish fantastical mythology of the highest order. It was the kind of ad not interested in marketing Derrick Rose, the player you haven’t seen in a while here to tell you about his new shoe, but instead in marketing D-Rose, injured warrior training through the void of night in a darkened gym, obsessively striving to rescue a city plunged into stasis by his tragic undoing. He wears cool shoes while he does it, but it’s beside the point.

Both these are examples of classic advertisement choices made by Paul and Rose’ management respectively. Creative Arts Agency made Chris Paul a family name. BJ Armstrong made Derrick Rose (at least temporarily) more myth than man. Rob Pelinka made Kevin Durant that guy the dad in the Sprint commercial turns into, where the pajamas don’t fit? Shocking that he might think Jay-Z could have a fresh strategy for his career. Simply shocking. Of course, then there’s that other nagging question, made more real for Oklahoma City fans and small markets everywhere by the possibility that Jay-Z will succeed in expanding Durant’s exposure and personal brand: what if this means Kevin Durant will leave Oklahoma City?

Maybe he does. But anyone panicking about it should remember he’s not a free agent, and has multiple years left on his contract. Between now and then, who knows what could happen? Maybe Oklahoma City seals a championship, propelling both the team and Durant’s career to new heights, and the idea of him leaving becomes preposterous. Or maybe the team has imploded after seasons of missed opportunities, injuries, poor front office decisions, and Durant’s decision to leave is entirely understandable. There's simply no way to peer into our crystal balls and divine what the future will hold for the Thunder or for Kevin Durant’s best interest, we can only exist in the now.

So here’s what the now is: Kevin Durant chose a partnership with a successful businessman who he both holds in high personal esteem and recognizes as skilled in cultivating a successful personal brand. He likely recognized that while Jay-Z the agent is “unproven,” Roc-Nation the agency is not, being nothing more than a new component and brand of Creative Arts Agency. I mentioned them earlier as being the representation for Chris Paul, but they also are responsible for players like Dwyane Wade, Chris Bosh, Tony Parker, Paul George, Carmelo Anthony, Michael-Kidd Gilchrist, and others. Successful players all, they occupy small and big markets alike. What Kevin Durant made was a rational business decision, nothing more. Anyone having a case of the small-market shakies shouldn’t lose sleep over it. After all, Wade probably won't even get the chance to block us.