Hey, everyone! We've been taking a bit of a break for the start of summer, but we're back. Our three main writers -- Aaron McGuire, Alex Dewey, and Alex Arnon -- are all slumming it in Vegas to cover the haps and antics of this year's Las Vegas Summer League action. Arnon and McGuire have been in town all weekend, putting together a cornucopia of miniature stories and notes for later digestion. This post represents a throughout-the-day effort by Aaron McGuire to de-mystify the strange and unreasonable tournament structure that the powers that be imposed on the Summer Day's concluding proceedings.

After years of inconsequential Summer Leagues, the NBA has decided it's time to stop messing around. It's time to get serious, folks. This year, they're attempting to institute an NCAA-style tournament for Summer League competition, leading to an actual Las Vegas Summer League "champeen" (as our lame-duck commissioner might well intone). In it, Summer League's 22 teams will face off for the most illustrious of basketball honors. Summer League Champion. Which team has the heart of a champion, dear readers? Which of these world-beaters will be named the greatest of all the death machines? Who, at the end of the day, will be able to count their rings?!?

Barring some end-state where the summer league tournament is a practice run for a future implementation of the Sports Guy's "entertaining as hell" tournament, just about everyone collected was mystified upon hearing of the hastily-constructed tournament restructuring. This widespread mystification became all the more apparent when the media and fans congregated at Summer League, sat themselves down, and started to look at the schedule to plan out their week's coverage. 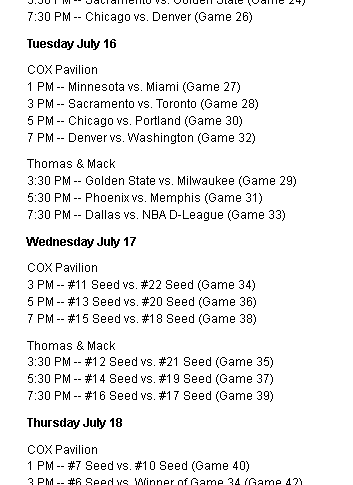 Cue widespread confusion. "Who's going to be playing on Wednesday?" ... "When do our beat writers need to go home, exactly?" ... "How bad do you need to be to become the #22 seed at the NBA's Summer League?" Lots of questions, few answers. But have no fear, my friends and neighbors -- we've got you covered. As Tuesday's game action rolls forward, Gothic Ginobili will be solving the NBA's seeding crisis and giving you the juicy details on who's playing who. By the time the day's over, we'll know exactly who is seeded where and the final schedule for Wednesday and Thursday's action.

And we'll look good doing it, too.

The bracket can be found here. For your sake, here's a repost of the bracket image. 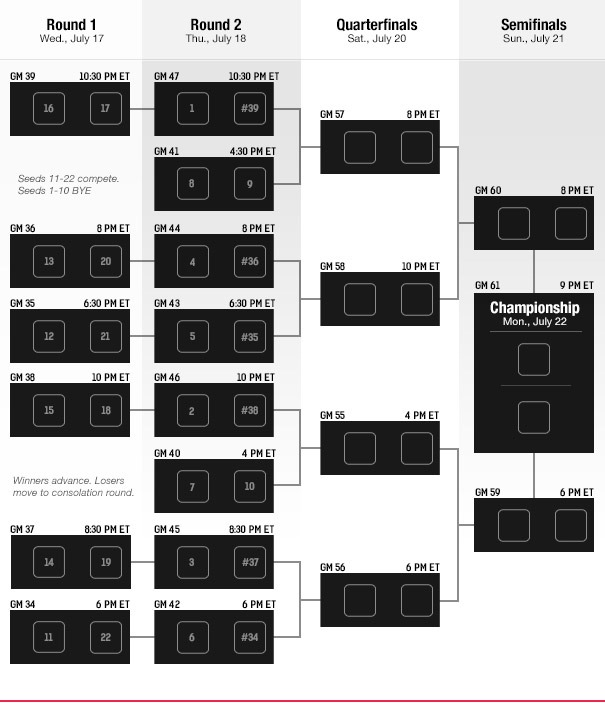 The seeding system -- while rather annoying to calculate -- is reasonably easy to explain.

Piece of cake, right? (Jokes aside, it's a reasonably well designed system given the constraints. Good job, NBA.)

Here's the most relevant part of this post for those still reading. What do the standings look like? Who's going to be playing who? 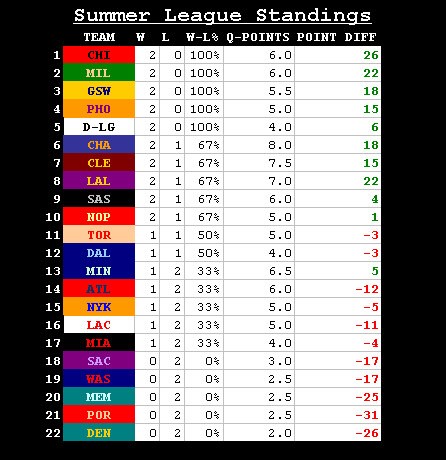 Seeding-wise, things will clear up significantly as the day goes on. Obviously. To that end, I'll be updating these standings to reflect new data. Don't worry, guys. We've got this. We're going to know the schedule before anyone else does. It's going to be a secret between you and I, dear reader. You and I.

UPDATE: Well, I've been updating my lucky Twitter followers of all this thick and juicy breaking news all day. Make sure to follow me on Twitter, as I am clearly the only journalist courageous enough to tackle the real tough questions on Las Vegas Summer League Tournament Seeding. Here's the scoop with three of today's games in the book:

LIFE IS SO CRAZY. 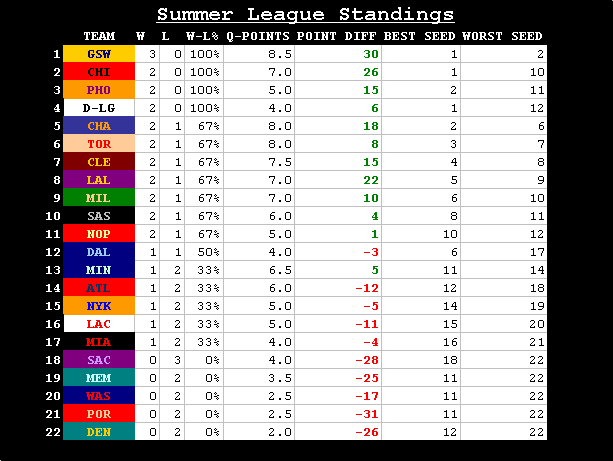 Here are the updated standings as of the end of Q1 of MEM/PHO and CHI/POR. 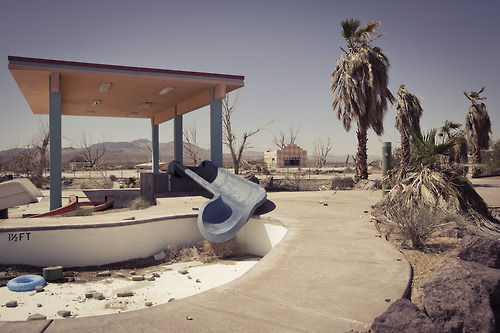 FINDING AUTHENTICITY IN THE MOJAVE WASTELAND

There's a sort of paradox that lies at the root of all team sports. Consider the underlying juxtaposition: the dynamism and entertainment of team sports alongside the dismal grind of the athlete's preparation. "He's an exciting, dynamic player" must be said, regurgitated, challenged, and deconstructed at its core before a team decides to take a chance on the player through waivers or trade or draft. The player's excitement and dynamism only emerged because of an enormous sacrifice of hours a day in training. Relentless decades in the video room, relentless self-analysis, relentless self-betterment.

I look at my endless, sprawling drafts and songs and -- alas! -- drawings. They're scattered. Various hard drives, scratch paper distracted from original function, Christmas albums published and unpublished, blogs with two entries that I really got enthused about and forgot the next morning, and all the sordid rest. And there are still days I wake up and can't seem to compose a sentence that anyone else on Earth can understand, at least to the extent that I want them to. It's dispiriting. And there are days I wake up and all the experiences, even those I'd previously classified as useless, are consummated together within my soul. And my prose flows freely. Comprehensible, understandable, stark. And most days are in the middle. If I'd worked at it less, I'd have more days like the former; if I'd more, I'd have more days like the latter. That's what I tell myself. And at the core of competition with the self, that's what we all have to tell ourselves. It's a conversation with ourselves that can be fraught with delusion, but it's a conversation about substance, and there's some sort of empirical measure to answer for.

"This isn't brilliant, but it's publishable."

"This isn't publishable, but it's fluent."

"This isn't fluent, but I kept the rhythm and the intonation. I can feel proud of this, given...".

Some of these players get paid millions of dollars to play a game, and in our culture we tend to get all righteous about this when teachers and firefighters and so on do so much more for our society and all that. With good reason. And then the counter: should we REALLY be determining what people can earn based on what others can't? Is there not room in a perfect society for a million-dollar athlete and a properly-valued million-dollar teacher? And the elephant in the room, the baseline here, might be that we tend to see sports as fun, above all else. But it's also a sort of strange evidence one can put forth of our incompleteness as a society, an unaccountable waste of time and resources, or at the very least a tasty side dish to the main course of life.

It's a way for me to have a confident, judgmental stride that I haven't deserved, an easy conversational shorthand to find common ground with fellow travelers. It's awful. Sometimes I think we watch sports in its spectacle to get to this form of paradoxical blend of miring ourselves in the drama and the simultaneous feeling ourselves above the drama. Rooting interests keep us grounded, aesthetics, sportsmanship, but sometimes I just want something interesting to happen. And, put it this way: My moral sense isn't always the first one to respond to an interesting happening.

Summer League is pretty neat because there is no such pretense of anything else. The league is too meaningless to be a determining factor in anyone's career, it's a Bayesian flyswatter of slight probabilistic meaning. And the competitiveness of the product on the court is nil and arbitrary. Lance Thomas isn't exactly competing with Deshaun Thomas, even if they may both be going for the board. Sure, it would be nice for each player to snag it. It'd be worse if they don't. But they're mostly competing against their team's established rosters, which has so little to do with the direct, symmetric competition before us that they might as well just repeat the tautological mantra: "do more, do better." And thus there's a strange blend of incentives. It's an overdose of a 35-year-old-on-a-28-win-in-a-contract-year team vigor. And that blend of incentives writ large determines the game. The fans know it, the writers know it, the front office people, the coaches, the players know it.

For all the occasional on-court absurdity, it's not wearing any alibis: In the end, Summer League is exhibition, it's learning, it's competition against the self that reigns here, for every single participant. Even for the fans, who are mostly in it for a good time and maybe some free T-shirts, there's not necessarily any sort of rooting interest so much as pursuit of entertainment. They have to find out what to watch for and enjoy it. It's authentic, even when the back-and-forth sequences of turnovers can make you grimace. Summer League is a nice bridge between the dismal "how athletes are made" (which takes decades) and the fascinating "what athletes can do" (which may take a tenth of a second). It helps us understand what must go on first, and gives us a taste of what symphonies this overture of decades is building to. And best of all, it doesn't pretend to be anything different.

Except for this tournament thing. What's up with that?