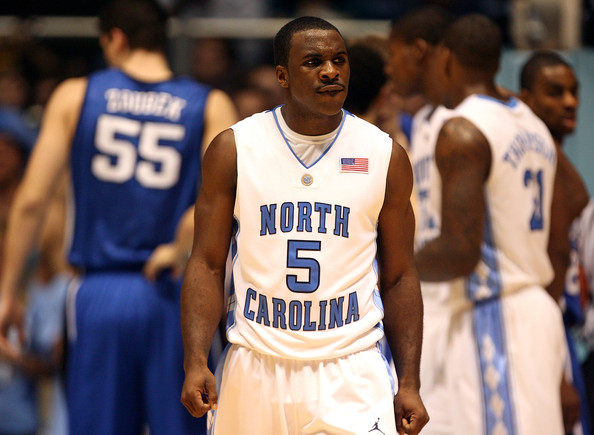 For our inaugural post for our "Shades of Willis Reed" feature, I was planning on doing a post about one of the league's injury-ignoring resident badasses (most likely Kobe or Manu). Then I was looking through my player capsule stuff and realized that, given the feature isn't primarily about injury and more just about moments where a player simply does something undeniably awesome, I had a perfect anecdote to start the feature off with right under my nose. Our starting player? Not a well-known star or an injury-prone fighter, no. He's not even a regular starter, or a well-known player. But he is the subject of one of my most impressive personal basketball anecdotes, and that's all you really need to make this feature. So without further ado: today's post is about Ty Lawson.

Spoiler alert: I went to Duke. Not my favorite place in the world, not the best three years of my life, but I did go there and I did go to a bunch of Duke games. I halfheartedly rooted for our basketball team while I was a student (though hated the team before I went there and currently find myself relatively neutral on it) and actually don't particularly care about the UNC rivalry. Most likely because my girlfriend currently goes to UNC. And I have a lot of friends at UNC, enough so that I can't in good conscience hate the university with the requisite vim. So, that's me. A Duke alumni who doesn't really care about UNC. That's odd.

Still. Going to Duke, you get a lot of funny rivalry stories over the years. This one is probably my favorite. At Duke, you need to tent if you want to make it to the Duke vs UNC game in Cameron. Tenting involves living in a tent for several months with a few of your friends to hold your place in the ticket line for when the free student tickets get distributed. I was never a crazy enough Duke fan to tent for a ticket to Duke vs UNC, but one of my good friends was exactly that crazy. In fact, his group started tenting virtually the second you could start it. They actually ended their winter breaks early to come tent. That was how crazy it was. As it turned out, he was just crazy enough about it to end up being in the front row, on game night. Right at the edge of the section behind Carolina basket. Easily visible for most of the game. It was pretty sweet. He got all dressed up, and the cameras regularly would drift to him as they went off to commercial breaks.

The game started out well enough -- I was watching in the common room with a bunch of other friends who didn't intend to tent for tickets, and we'd cheer every time we saw him or anyone else from our dorm in the crowds. We were leading pretty big as we approached the end of the first half. Given that Duke was a fringe contender that year and UNC was one of the greatest teams of the last decade, it was a big accomplishment. But there's one moment that I distinctly remembered. The camera drifted to my friend right as he started yelling some not-particularly-safe-for-work stuff at some UNC player who happened to be walking by. We all got a laugh out of it.

UNC proceeded to make a huge run and went to the half with all the momentum as Duke clung to a single-digit lead. UNC ended up dropping 57 points in the second half and blew Duke out in Cameron Indoor, becoming the first team in 9 years to score triple digits against Duke and winners of four straight on Duke's home court -- making Hansbrough and Green (both seniors) two of only four players to win four games at Cameron Indoor in their collegiate career. They joined Rusty LaRue and Tim Duncan. Yes, Virginia, THAT Tim Duncan. Pretty wild. Anyway. Suffice to say, we got the stuffing kicked out of us.

I saw my friend later that night and didn't want to say anything. He was sad, angry, and disappointed. There wasn't much that would console him, and I felt like saying something would only needle him. But... well, don't ask me why -- I don't remember -- but I decided to throw all that to the wind and ask, because that image of him yelling at one of the Carolina players was stuck in my head.

"Man, who were you yelling at before the half?"

"Wait, what? He scored, like, all of his points in the second half."

"Goddamnit, don't remind me, I know. We'd just scored and we were up by 15 or something and I yelled some catcalls and stuff, and someone else followed up with some shit about his mom. He looked back at us, grabbed the ball, drove down the court, and crushed all our guys to get an easy layup. He was staring at our corner all the way down the court. Next time Coach K called time, he walked up to me and basically told me I was a bastard from a shit school whose shit talk had guaranteed we'd lose. He told us to go fuck ourselves, and said that after he dealt with us he'd be laughing all the way to the NBA. Then he laughed at us while we stared at him and walked back to the bench. Then you know what happened. Twenty one fucking points in the second half. Ran the offense like a pro. And every one he scored, he catcalled the crowd. Kept looking at us and laughing. He was having a great time. Nobody could stop him. It was the worst fucking thing. Now I feel like I cost Duke the game and ruined our season. How the fuck do we come back from a loss like that?"

(He did. Duke bowed out early that year.)

At the time, this story made me greatly dislike Ty Lawson. With the benefit of time and separation from college ball, however, I now see it as a pretty amazing story about a great point guard who put the team on his back and actually did something about the kids who were mussin' on him. Honestly? Good on you, Ty Lawson. This story is badass as fuck and if it wasn't UNC vs Duke I would've recognized that long ago. Shades of Willis Reed up in here, in fact.